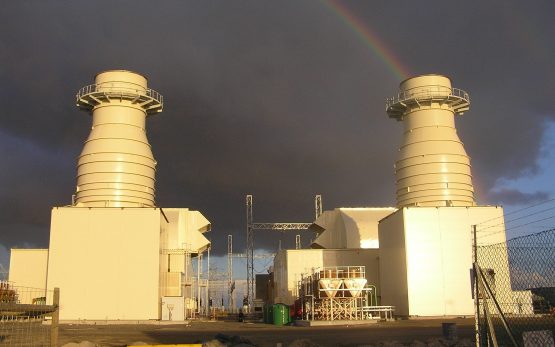 Exhaust stacks at Ankerlig power station near Atlantis, which is inline for an expansion of its generating capacity by around 100 MW. Image: Supplied

Energy regulator Nersa has published an application by Eskom to amend its generations license for the 1 327 MW Ankerlig OCGT power station near Atlantis in the Western Cape, which is in line for a planned R3 billion expansion.

The additional 100 MW it hopes to have in operation by March 2024 will mainly provide back-up off-site generation capacity for the Koeberg nuclear power station at nearby Duinefontein.

This comes as its Acacia power station at Edgemead in Cape Town that was built for this purpose reaches the end of its design life. Acacia has three 57 MW gas-fired units and was commissioned in 1976.

OCGTs are designed to provide additional generation capacity for relatively short periods of peak demand, but Eskom has been using its own and those of independent power producers extensively at huge cost, in an effort to avoid load shedding.

Eskom says the additional three units at Ankerlig are mainly to ensure compliance with nuclear safety standards by providing an additional, off-site power supply for Koeberg.

Should Koeberg’s primary power supply fail, the off-site facility will ensure that the plant can still shut down safely.

When not required by Koeberg, the planned units will be available to support the national grid in case of emergency, according to the state-run power company. Eskom has already appointed a contractor and hopes to have construction completed in 30 months. The targeted date for commercial use of the new units is March 2024, but Nersa has been requested to amend the license from March 2023.

Ankerlig currently burns diesel at exorbitant cost and Eskom has embarked on a feasibility study to convert all its OCGTs to use gas instead.

This is expected to drive down cost. The application to Nersa to increase generation capacity at Ankerlig is however still on the basis of diesel as feeding stock. The new units will have a design life of 25 years.

The Ankerlig investment comes as Eskom is embarking on a project to extend the life of Koeberg by 20 years. It is about to switch off its second unit this month to replace its steam generator – a process planned to take about ten months.

This will deprive the grid of 900 MW of generation capacity which almost equates one stage of load shedding.

When the work on Koeberg’s second unit has been completed, the first unit will be subjected to the same process.

On January 5, Eskom’s total generation capacity during the evening peak was 28 272 MW while the total demand was 25 931 MW. It did not use any OCGTs.

Converting to CCGT would increase generation and improve efficiency (+22%) to acceptable levels.

If it’s CCGT upgrade then it’s welcome.
If just more inefficient OCGT turbines then it’s a problem as OCGT is not efficient, expensive per MWh, and more pollutant per MWh.

Both still infinitely better than Karpowership and to market just a quick as Karpowership.

I actually thought that the difference in output, efficiency was more than 22%, more like 30-35%. CCGTs are considerably more expensive, complicated, more sensitive to maintenance,work at much higher tips and pressure and take far longer to start up. OCGTs can reach full power in 15-20 min

Temps, not tips. AFAIK there are no LNG terminals in SA, so the idea to convert the OCGTs into more cost-effective units will take some time.
Eskom CEO told a few months back that they produce at R 5/kWh on diesel.The powerships would receive imported LNG by Shell

The first result was 22%, but you right more like 30-35%. In terms of expensive CAPEX, at 30-35% efficiency saving, the payback is very quick – never mind the environmental savings. Most of the world uses CCGT for emergency power, pretty sure Eskom could do the same. In terms of LNG vs Diesel, the costs are very much in favour of LNG.