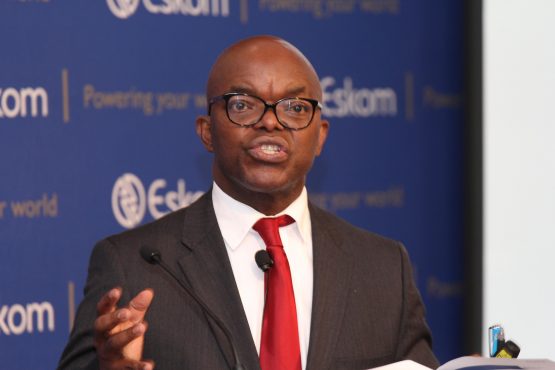 The embattled South African state power utility’s debt burden, described by Goldman Sachs as the biggest threat to the nation’s economy, has burgeoned, compounding the difficulty the government faces in formulating a turnaround plan.

Eskom’s debt is approaching R500 billion ($35 billion), according to data compiled by Bloomberg from public records, including bonds and issued loans, up from about R370 billion a year ago. While the utility declined to comment on the current number, its Chief Executive Officer Phakamani Hadebe last month put total debt at about R450 billion.

Read: SA to bail out Eskom without taking on debts Eskom hasn’t been selling enough power to cover its operating costs and interest payments, and has been forced to implement rotating blackouts over the past few years to prevent a collapse of the national grid as its fleet of ageing and poorly maintained plants struggled to keep pace with demand.

President Cyril Ramaphosa announced plans earlier this year to split the company into three units to make it easier to manage, and the National Treasury allocated a R69 billion cash injection over the next three years in the February budget — a bailout that’s already been partly offset by the rising debt.

The restructuring will allow for greater participation by private industry in the electricity industry but there are no plans to privatise Eskom, Ramaphosa said at an investor conference organised by Goldman Sachs in Johannesburg on Wednesday, his first engagement with business since he won a five-year term in May 8 elections.

“Eskom is too big to fail,” he said. “If Eskom fails, this economy fails.”

Read: So where is the money from China? Still coming says the DPE …

The composition of the utility’s debt has also changed, with loans accounting for just more than half of its total burden, up from 40% a year ago. The switch to short-term financing hasn’t been smooth sailing — a loan agreed with China Development Bank failed to come through as scheduled earlier this year and Eskom had to take out an urgent R3 billion bridge loan from Absa to avoid a call on existing guarantees.

Ai toggie. From bad to worse. When will we hear some good news regarding Eskom?

Chris, how can there be good news? Nothing changes; cadres stay in place and get coal and services from incompetent and corrupt tenderpreneurs. The bloated, incompetent, crooked and unqualified staff stay in place, nay, get increases.

There is a tale – possibly apocryphal – that during the Second World War, Churchill asked for the positions of all British ships in the North Atlantic ‘on one side of a postcard’. True or not, the principle holds good for Eskom. Too often decisions are clouded by too much information, confusing graphs and hundreds of pages created by ‘experts’. Let’s look at Eskom ‘on one side of a postcard’. 1) Coal is dirty, upping CO2 levels, and banks are refusing to lend money for coal-fired stations. It’s a dying industry. 2) South Africa needs a reliable source of power to prosper. 3) We have abundant supplies of sunshine and wind – and renewable projects can now come in at under 50c/kW, far lower than coal-produced electricity. They can also come on-stream in a short space of time, providing many jobs. 4) Independent power producers must be freed to sell to Eskom 5) Concentrated Solar Power stations can provide power for around 4 hours after sundown due to molten salt 6) Lithium ion battery power too is fast coming down in price. 7) Nuclear is a no-no, and would anyway take many years to implement. 8) So let’s have a combination of renewables and Eskom power instituted asap, with the unbundling of Eskom carried out swiftly and the distribution section enabled to buy power from independent producers. Using our natural assets is a no-brainer.

The cadres used to deal in billions, they moved swiftly to trillions but of course when hyper-inflation hits us (it will, as the cadres control the printing presses and how long will they resist temptation?) then they’ll have all the trillions they need – save that it’ll buy you a loaf of bread as per Zimbabwe2.0.

We should stop worrying about Eskom. We should start to worry about ourselves if we have not done so already.

Eskom is the largest canary in the coal mine. Eskom, along with all the smaller canaries are dead already. The frantic ANC is trying to resuscitate these dead canaries with a canister of carbon monoxide at the moment.

They should abandon these dead canaries and call the rescue crew of the IMF to come with oxygen to save the people. We are living in a mining disaster of epic proportions and the ANC is procrastinating, considering only the cost to their selfish personal interests, protecting their loot.

The IMF should take over the management of this mine. The current team of corrupt socialist looters will run for Dubai when the mine implodes on the people.

The first practical and sensible comment about Eskom. The IMF bit won’t happen, but the rest is good advice: Look after yourself. The writing has been on the wall for Eskom for a long time now, but the end will be sudden and quick. Get ready.

500 bn! All because the gutless regime doesn’t want to ruffle feathers by jailing corrupt scum and useless workers! Pride is going to sink this country

Hello Bobsmith: Why call it “pride’ when whoever’s job it is to see that the job gets done is too scared to be the unpopular ones?

Oops… looks like that China loan isn’t arriving any time soon. Eskom will need another bridging loan for its bridging loan!

It is true that 3 things did unmentionable harm to race relations in this country: (1) the homelands, (2) the pass book system and (3) influx control. The NP government treated black people like lepers and shoved them into the distant corners of this country. However, does this give them the right to destroy Eskom, SAA, Prasa, Transnet, SABC and 50% of the municipalities in SA and the list goes on? If a man was ill treated in the past does he now have a license to do whatever he wants? At the moment it is a race to the bottom destroying functioning state assets and then call it a “victory for transformation”.

Couldn’t agree more. CR been around for nearly 1,5 years and nothing substantive has changed. Crime, corruption, SOEs , Unemployment all a mess. all talk-no delivery-a true son of the ANC!!

In sunny Randparkridge we had yet another blackout this morning thanks to Eskom, City Power and my favourite orator Herman Mashaba – are there any competents among politicians or SoE’s

No. The most dangerous person to deal with is someone who THINKS he/she knows.
Unconscious Incompetents.

This thing is history.

Took Eskom 14 months to install a pre paid meter. this problem has just gobbled them up, all the dithering and wasting time.
20000 extras @ the Eskom average salary is 14 billion a year savings.
Maybe give it to Numsa to run. They full of clever ideas.

Hello pwgg: You may mean exactly what you say about NUMSA but if you are just being sarcastic, don’t be. IT MAKES FOR BAD READING. Try and make your point in a manner that we can all understand. Thanks.

Sorry Andries my bad 🙁 yes I was being sarcastic but I am sure all understood.

Andries, honestly man, ganja is legal now… get some and chill out.

Phakamani Hadebe …a bean counter with no operational experience. A chairman who sits on the board of S Sun and Tsogo Sun, but no engineering background.
No shortage of Dr’s and Professors on the rest of the board, but very little actual large scale engineering and management experience. Most of the skills seem to reside with academia (a chemistry professor with no industry experience sits on the board), policy formulation, a past history at some or other SOE, and then establishment of a “consulting firm” which does work for the government.

Don’t hold your breath for them to rescue Eskom.

Simple …. Eskom requires a 100% increase in tariffs to reduce it’s debt!!! My suggestion to this problem is now for the ANC to start taxation on the air that we breath!!!! There is no alternative. From a pensioner!!!!! good luck to the new comers, the so called millennial.