Less than a month after President Cyril Ramaphosa removed her from his cabinet.
By S'thembile Cele and Paul Vecchiatto, Bloomberg 19 Aug 2021  16:41 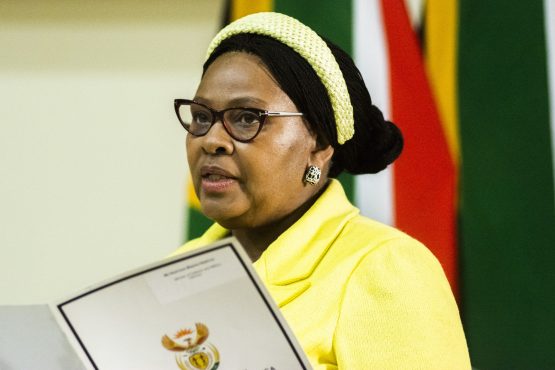 The speaker’s post became vacant after Ramaphosa appointed incumbent Thandi Modise as defense minister, one of 10 changes made in an August 5 reshuffle of his executive. Mapisa-Nqakula was a shoo-in for the legislature job after the ruling African National Congress, which has an outright parliamentary majority, selected her as its candidate.

Mapisa-Nqakula and the heads of South Africa’s other security ministries came under fire for their response to an outbreak of rioting last month that claimed 354 lives and saw thousands of businesses looted. She initially contradicted Ramaphosa’s assertion that the unrest amounted to an insurrection, but later backtracked.

Mapisa-Nqakula was appointed defense minister in 2012 by then-President Jacob Zuma. The Johannesburg-based Sunday Times newspaper reported in 2016 that she’d used an air force plane to transport a Burundian woman from the Democratic Republic of Congo to South Africa and helped her enter the country illegally. She denied any wrongdoing.

Ramaphosa docked her pay last year after she was found to have abused state resources when she allowed ruling-party officials to accompany her on a government jet to travel to Zimbabwe.

No surprise, just more proof that loyalty to the party is what matters to slippery Cyril and his gang.

I would NOT get between that woman and the buffet

Yet again, the DA under Steenhuisen disgrace themselves with the utterly spineless acceptance of this rigged appointment.

It is a manifestly wrong – and VISIBLY DANGEROUS – that the key “neutral” Parliamentary position should be occupied by a party stalwart.

This position should be filled by a person with ZERO party affiliation, AND a proven professional track-record of making wise, intelligent, unbiased decisions. This candidate is NOT that person!

Steenhuisen will argue that he could play only according to Parliamentary rules, and that his hands are tied.

That would be the excuse of the proverbial Snowflake.

Given the history of abuse of this position by the ANC, What SHOULD be done by an Official Opposition that REALLY does have fire in its belly, would be to simply walk out of Parliament, and ABANDON Parliamentary attendance until this Constitutional Problem has been fixed.

There is no other credible alternative!

Do you think Steenhuisen has the balls to create a Constitutional Crisis?

The DA representatives at Municipal and Provincial level are doing a credible governance-delivery job at their level.

But Steenhuisen and his expensive crew in Parliament?

Complete waste of time! They could just as well stay at home and save the taxpayer their grossly-inflated salaries.

Change the course of South African History? Don’t rely on the DA to do that.