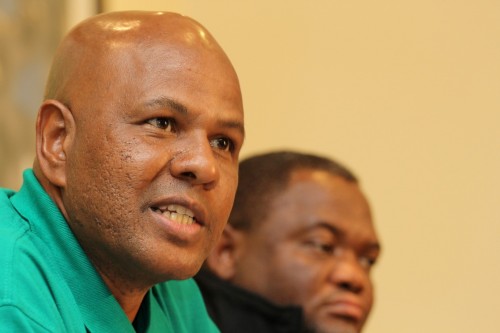 JOHANNESBURG – Association of Mineworkers and Construction Union (AMCU) leader Joseph Mathunjwa made his first entrance and engagement with the investment community at the Joburg Indaba on Thursday, which provided some fascinating insight into his thinking and mindset. The man has been notoriously hard to get a hold of and this meeting was certainly widely anticipated at the indaba – if the size of the crowd was any indication.

He attended a plenary session alongside Impala Platinum CEO Terence Goodlace, which was chaired by the indaba’s organiser Bernard Swanepoel.

The issue of dignity and redress is clearly fundamental to Mathunjwa’s outlook, as he responded to the first question from Swanepoel on what his dream for the industry is. “The majority of workers were forced to the mines [when minerals were discovered in South Africa] and they were forced to lose their dignity.” Clearly central to addressing the issue of dignity is the abolishment of the migrant labour system. “We have to change the migrant labour system. What values do you instill in your children, if you don’t see them every day?” he asked.

On what his definition of modernisation is for the industry, a question posed by Swanepoel, Mathunjwa provided a wily understanding of the economics of mining, saying that, “Modernisation is where the majority of mineworkers have proper skills – and most of the companies fail to do this. So workers are treated as a cost instead of a resource, and as such it is easy to retrench them.”

When the topic of (declining) productivity in the industry was broached, Mathunjwa pointed out what he considers to be an obvious contradiction: “Productivity – its been discussed for quite some time. The mines were very productive from 2002 – 2010, and the workers lost out on R100 billion [in wages]. But the only time the industry discusses productivity is when it wants to downscale. No one talks about productivity when it is making money.”

He returned to the topic of dignity and redress when the subject turned to wages, in which he has been very outspoken especially around the number of R12 500 per month being the minimum considered for a living wage. “We have been giving, but we have not been receiving. Workers have silicosis, which they got from mining gold and diamonds. We are sitting in this fancy city [Johannesburg] that was built on the back of the sweat and blood of the workers. Where I am from, the miners cannot even buy their own houses but yet they have worked their entire lives in the mines. So until they realise workers are human beings, we won’t make any progress. The capitalists are only interested in making profits, not addressing the ills of the past, so the country will [continue to] burn.”

As the leader of a worker movement, it would be unsurprising to hear Mathunjwa favour state-led or nationalisation-inspired policies on which to operate the industry and the economy. But he was indifferent on the subject, and instead pegged his colours to the mast of the worker, regardless of ideology. “We want a wage-led economy. If nationalisation will address the challenges faced by the country, so be it. But the current system is leading to wider and wider disparity,” adding to laughter that, “the government has nationalised NUM already”.

But his disapproval of the current government was crystal clear. “Not much has changed for the worker since 1994. You have a TV Bernard [Swanepoel] – you can see the townships are burning. The status quo [current government] will not remain. Marikana revealed that the government is more on the side of investors than its own people.”

In Mathunjwa’s view, the “new economic policies” of the democratic government are, in outcome, no different to the ones of the past. “The challenge that we have, and its a thorn in the flesh, is that the new economic policies don’t address the ills of the past. The government must realise that the current system of attracting investment doesn’t work. [Now] The Chinese bring their own steel, their own cement, even the South African flag is made in China. Highveld steel is closing. All the textile industries are closing. If you don’t fold up your sleeves and get into the reality, it’s not going to address anything.”

Naturally this attitude has also led to scorn for government-led initiatives such as Operation Phakisa, which aims to get key stakeholders working together. “Phakisa – what is that? I don’t even know what Phakisa is –  I think we only got invited yesterday. We can’t have a knee-jerk approach to issues of national significance.”

Getting a read on Mathunjwa is clearly very difficult to do, as members of the Chamber of Mines have told us before. The man remains an enigma, oozes charisma, and bows to no one. But he appears to be completely aligned with the interests of his constituency. So from his past actions, and the words he ushered here, face-to-face with the capitalists in their own house, the man’s raison d’etre is clear: “We will fight until we achieve a living wage”.