Being sued following the suspension of a National Nuclear Regulator board member who also works with a civil society group fighting against the lifetime extension of the continent’s only power reactors.
By Antony Sguazzin, Bloomberg 3 Feb 2022  14:05 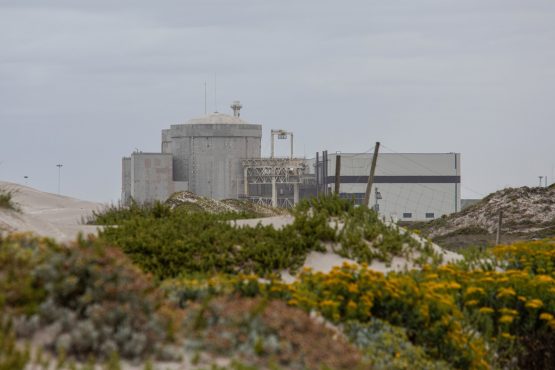 South African Energy Minister Gwede Mantashe is being sued following the suspension of a National Nuclear Regulator board member who also works with a civil society group fighting against the lifetime extension of the continent’s only power reactors.

The suit filed by Peter Becker, who in addition to serving on the nuclear regulator’s board is a spokesman for the Koeberg Alert Alliance, will be heard by the High Court of Cape Town on February 8, according to public documents seen by Bloomberg. South Africa is legally obliged to appoint a nuclear regulatory board member who represents communities potentially affected by industry decisions.

“It is a constitutional matter,” Mantashe said in a response to a query, without commenting further. The nuclear regulator didn’t respond to a request for comment.

Becker, who was suspended on January 18, argues in the documents that Mantashe didn’t have the legal authority to suspend him from performing his duties on the regulatory board. “The role of a board member representing the interests and concerns of communities is defined by the National Nuclear Regulatory Act” and “while I am suspended, decisions are being taken by the board without that representation,” he wrote in a reply to questions.

The court case highlights the difficulties Eskom Holdings SOC Ltd. is facing in its fight to keep its Koeberg nuclear plant in Cape Town operating until 2044. Mantashe, a former coal mining unionist and chairman of the ruling African National Congress, has emerged as a vocal supporter of the nuclear industry, while drawing criticism from environmental activists.

On the same day that Becker was suspended, Eskom received regulatory permission to replace aging equipment at the 1 800 megawatt Koeberg plant. Three days earlier the utility said it was shutting down one of Koeberg’s two units for refueling, while starting a program to spend about R20 billion ($1.3 billion) on new steam generators as a “precautionary safety measure.”

The nuclear regulator said installation of the steam generators was a ‘business decision’ made by the company. Eskom is expected to submit an application by July for the safety assessment necessary to extend Koeberg’s lifetime, the regulator said in a statement.

Becker and Koeberg Alert have opposed Eskom’s plans to extend Koeberg’s operating license because of the nuclear plant’s proximity to Cape Town, a city of four million people, citing what they say is a potential for earthquakes.

The incident raises issues of governance for civil society groups, according to Liz McDaid, who advises the Organisation Undoing Tax Abuse, which investigates corruption.

“Why is this all happening at a time when a decision is being made about whether to extend the life of this reactor?,” she said.