To enable the repair and recommissioning of raw water pipelines damaged during heavy rains in April.
By Bloomberg News 17 Jun 2022  13:13 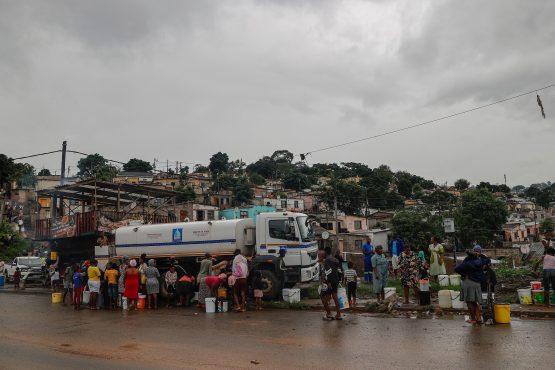 Residents of Bhambayi settlement queue to fill up their buckets with water form a water tanker as a result of interruptions by heavy rains and floods on the M25 highway in Inanda, north of Durban on April 13, 2022. Image: PHILL MAGAKOE/AFP via Getty Images

South Africa’s eastern eThekwini Municipality, which includes the port city of Durban, plans to ration water for about a year, dealing another blow to a regional economy damaged by the worst flooding in almost three decades and deadly riots.

The rationing, scheduled to start in some parts of the area from Monday, is being implemented to enable the repair and recommissioning of raw water pipelines damaged during heavy rains in April, the municipality said in a statement on its website. The downpour triggered landslides and flooding, wrecked infrastructure at the nation’s biggest port and halted operations at vehicle-manufacturing plants.

Read: KwaZulu-Natal still on the receiving end of calamities

The destruction has meant the Durban Heights Water Treatment Plant, which supplies at least 50 reservoirs, hasn’t been able to source sufficient water from the Nagle Dam, north-west of Durban, according to the municipality. It warned that the shortfall will persist for the next 10 to 12 months, with contractors hired by the state-owned Umgeni Water expected to finish work on the damaged pipelines by June 2023.

eThekwini, South Africa’s third-largest urban centre, is part of the KwaZulu-Natal province — the second-biggest contributor to the country’s gross domestic product. The water rationing comes less than a year after a week of rioting and looting in the region left hundreds of people dead and shuttered thousands of businesses. Its output has also been hit hard by strict coronavirus lockdown measures that initially brought all but essential activity to a standstill, and by intermittent electricity outages as the state power utility struggles to keep pace with demand.

Parts of the neighbouring Eastern Cape province, which includes the coastal city of Gqeberha, are also facing water outages. That’s as the levels of a major dam have dropped too low for extraction.