Livestock is the largest contributor to commercial farming in SA. Image: Shutterstock

We have been assured of uninterrupted supply during the 21-day lockdown period aimed at halting the spread of coronavirus in South Africa. However, Tuesday’s release of Statistics South Africa’s Census of Commercial Agriculture 2017 report is perhaps timely. It provides insight into a sector on which we all depend.

Livestock farming was leading the pack in commercial farming at the time of the study, but employment opportunities in this industry had been losing momentum.

Read: Young South Africans want to farm. But the system isn’t ready for them

As the following graph shows, the Western Cape was by far the largest employer, accounting for 24.7% of agricultural employment. Gauteng was the lowest at 7.6%. 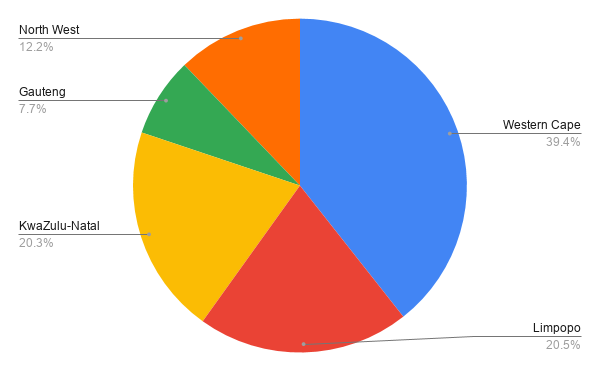 Wandile Sihlobo, chief economist at the Agriculture Business Chamber, says the Western Cape continues to be a leader in South Africa’s agricultural employment and fortunes, because of the kind of agricultural activity that is dominant in the province: horticulture.

“This is a high-value and labour-intensive subsector of agriculture,” he says. “Hence, if one looks into Chapter 6 of the NDP [National Development Plan], there was a great motivation that, in areas where possible, SA should expand its production of labour-intensive agricultural subsectors.”

The past decade was marked by painful droughts in various parts of South Africa.

Sihlobo says one can look back on 2015/16 as a challenging period for most regions of South Africa, with the exception of the Western Cape.

However the drought in the Western Cape in 2017 had a devastating impact on agriculture as well as communities.

“So one would expect a negative impact on agricultural jobs in such conditions,” says Sihlobo. “What is comforting however is that the agricultural labour market is again vibrant, with about 885 000 people working in South Africa’s primary agriculture sector at the end of 2019.”

What concerns him most now is the Covid-19 pandemic and the impact it will have on South African agriculture at large, and thereafter on the agricultural labour market.

The commercial agriculture industry reported total income of R332.8 billion in 2017, considerably higher than the R85.9 billion achieved in 2007.

Just as in employment, the Western Cape is the frontrunner in securing the most revenue in commercial farming across all industries. 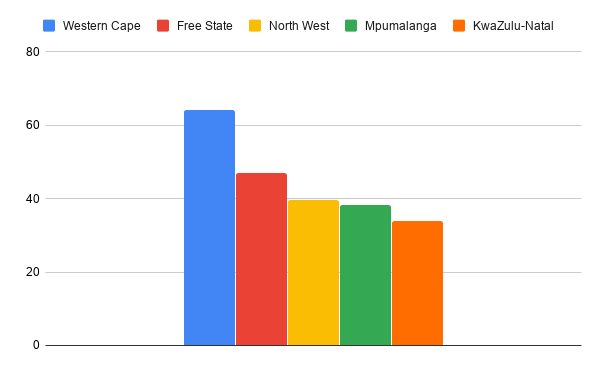 Figures as at September 2018 indicate that commercial agriculture accounted for 37.9% of this (46.4 million ha), comprised primarily of grazing land used for livestock and game farming (36.5 million ha) and arable land used for crop production (7.6 million ha).

Sihlobo says that although the area farmed is important, the type of activity or agricultural subsector that a province is most focused on is more important. He says this is determined by agroecological conditions rather than preference.

In 2017, South Africa had 40 122 farms involved in commercial agriculture: Stats SA noted that from 2007 to 2017, maize, soya beans, sunflower seeds, wheat and sugarcane remained the most planted crop despite the dry weather conditions. Cattle, sheep, pigs and goats remained the most dominant livestock enterprises in SA.

Sihlobo says the reason livestock commercial farming is so dominant is partly due to the agroecological conditions in the country. “We don’t have much arable land in SA, hence there is widespread livestock farming.”

As a farmer I welcome this attitude. Makes it easier to get through the day without having that nagging thought in the back of your head that the calf you saved today may just become some one else’s tomorrow.

Julius, are you reading this as you scoff down your bacon and eggs on toast with milk in your coffee.

Absolutely agree, thank goodness we don’t have to import these items.

Seen an appropraiet bumper sticker on a Hilux some years ago, and it still sticks (in my mind)

“Next time you complain about the farmer..
…DON’T TALK WITH YOUR MOUTH FULL!”

Pardon the pun, given activity at liquor sales outlets… we need to respect our farmers and farming industry
Without farmers we will be naked,hungry and sober!

“God looked down on His planned paradise, and said ” I need a caretaker”.

So GOD made a FARMER.

Thank you to our farmers.