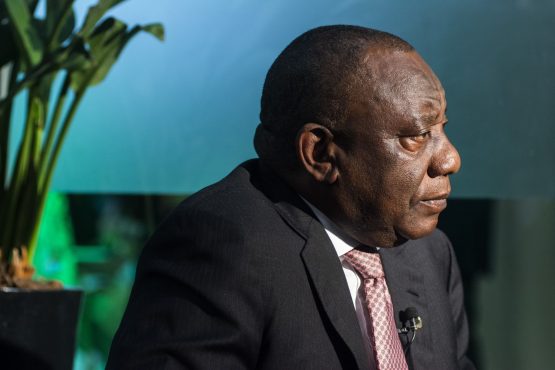 South African President Cyril Ramaphosa’s tenuous control of the ruling party was laid bare at the weekend when its leaders rebuffed his proposal to investigate allegedly tainted state contracts for health equipment.

Ramaphosa called for a panel led by former President Kgalema Motlanthe to scrutinise deals secured by African National Congress officials, but was spurned at a meeting of the party’s National Executive Committee, according to three people who attended the gathering and spoke on condition of anonymity. Instead, they accepted Secretary-General Ace Magashule’s suggestion that the ANC’s integrity commission handle the matter, the people said.

Ramaphosa, 67, replaced Jacob Zuma as the ANC’s leader in December 2017, after narrowly winning an election against Nkosazana Dlamini-Zuma, Zuma’s ex-wife and favoured successor. Members of a party faction who were allied to Zuma and have loosely coalesced around Magashule won several other top party posts and seats on the NEC, leaving it deeply divided.

The ANC forced Zuma to quit as president in February 2018, after his scandal-marred nine-year tenure caused it to haemorrhage support, and replaced him with Ramaphosa. His tenure as party leader runs until late 2022 and as president until 2024, but he may seek re-election to both posts.

Stymied efforts
While Ramaphosa has pledged to clamp down on endemic corruption, his efforts have been stymied by a lack of support from his party and a dearth of capacity within law-enforcement agencies. Not a single high-profile politician has been convicted in connection with the theft of more than R500 billion from the state during Zuma’s rule, and the ANC hasn’t expelled any members that were implicated.

Allegations of officials abusing their positions have continued under Ramaphosa’s administration.

Khusela Diko, Ramaphosa’s spokeswoman, and Bandile Masuku, the political head of the health department in Gauteng, were both forced to vacate their positions after it emerged they stood to benefit from contracts to supply the state with equipment to protect heath-care workers against Covid-19.

Ramaphosa has instructed nine government agencies to investigate possible impropriety regarding the Covid-19 contracts. And last week he urged the ANC to follow through on a resolution it took in 2017 — but never implemented — to suspend members who were facing investigation or disciplinary proceedings.Two of Magashule’s sons also won contracts worth R2.7 million to supply goods and services to combat the coronavirus in the central Free State province, the Daily Maverick reported on July 31. Magashule, a former premier of the region, said he exerted no influence over the tenders, the news website said.

“We have an obligation to combat, root out and isolate the corrupt elements amongst us,” he said in an ANC memorial lecture that was delivered on his behalf. In his weekly letter to the nation on Monday, the president likened those who stole food parcels, unemployment benefits and other Covid-related aid to hyenas and said they would be dealt with decisively.

Harsh criticism
Despite his tough public stance against graft, Ramaphosa drew criticism at the weekend meeting for failing to bring the scourge under control, with Magashule declaring the problem worse than during the Zuma era, the three NEC members said. The president and his administration, other than Health Minister Zweli Mkhize, were also criticised by several NEC members for failing to contain the coronavirus, they said.

More than 516 000 people in South Africa have been diagnosed with the disease, the fifth-most in the world, and 8 539 have died.

Two of the NEC officials also revealed that:

Ramphosa’s biggest mistake was to do a deal to try and reunite the ANC by bringing in the Zuma faction in with him e.g. Ace Magashule as SG and D Mabuza as deputy president. He should have purged the Zuma faction when he had the chance in order to start off with a clean slate. But he didn’t and it is too late now. They will undermine him whenever they can and every day they are getting stronger.

Stronger and wealthier. NDZ is going to go head to head at the next elections and she could be our next president.

You are probably right. BUT whoever it is – the looting will continue unabated, until the pot is empty and the Rand is trading at $ US / R 100.

That’s what I call an OPTIMIST! *lol*

But everyone knows he’s only a puppet

“My fellow citizens” is the best he can come up with, thereafter empty promised

I’ve always liked Terror Lakota.. what happened to you?

@ TaffeDee R100/$ in the future would be a bargain. I suspect in the long term the Rand will more closely resemble the Zim Dollar.

The current pecking order in the ANC proves that JZ never really left office. He is still there, in my opinion of course.

Who makes the real decisions. NDZ – his ex wife. Magashule, Mabuza and Cele, all JZ loyalists. As the article implies CR is a puppet – he was placed in his position on the basis of a huge compromise – the need then, for what was seen as an economically pacifying figure head.

The rating agencies needed this and at the time so did we, the short term performance of the ZAR back then proved same. However, i do not believe he populated the senior office positions out of a need for solidarity, that is not how the ANC works – he has very little to no say in it. It was all put on paper as a deal, he had to agree to, before the final exchange of votes was allowed to ‘gift’ the presidency to CR.

In reality nothing could be further from the truth. Your best guide is the ZAR – the 2019 outside year reversal to the downside was your confirmation. The recent 1 week blow out from 16.30 to 17.50 is another warning. Euro/ Yen and stock markets in SP500 and $ND are making new highs, yet the ZAR is showing extreme relative weakness. What happens if there is another global sell off or panic – this is rhetorical.

NDZ and Mabuza/ Magashule are riding rough shot over CR – and the world is starting to see this and realise. Combined with the catastrophic lock down and the coming generational civil unrest. The RSA canary has always been the ZAR – it is certainly behaving in a very ominous manner.

Linking Ace Magashule to an ‘Integrity Commission’ is the ultimate oxymoron.

If CR is the best the ANC has & was touted & promoted on a unity ticket.
Well this article along with the smoking/no smoking farce then I reckon he’s definitely a 1 term ticket.

In my opinion it makes no difference who the “frontman” is. The real direction comes from Lootfreely House. That is where the politburo sits (or the ring of mafia bosses if you please – same thing in principle). My gut feel is that the boss of bosses (capo dei capi) is Ace. Top of the the pack – just has the face. NDZ is the queen of clubs and CR the Joker (not the funny type either)

Interesting pattern …. an incomplete term amongst presidents (except Mandela)

CR is a puppet of the Zuma faction.

So basically, the SA Government is really just a “shadow government” to the ANC Political Party.

The “Oath of Office” that is made to put the Country first (before party) is completely meaningless.

That says is all

The damage done by being disadvantaged in the past has affected these poor souls terribly. It has for instance caused them to loose all dignity. HUMAN DIGNITY.

Ramaphosa should have left the cronies out of his cabinet from the start AND the media only woke up to reality when it was too late. The mere fact that Ramaphosa failed to reign the inflated public wage bill by retaining a string of unneeded deputy ministers way back then, already proved how unreliable and wishy-washy he is.

I’ve said it once and ill say it again. The president is implicated and has no clout, Tow the line, or we will show the people the blood on your hands..

People of SA take back your country or get used to being like your neighbors up north. The Shona showed no backbone to Mugabe and look where they are today. Wake Up!

Moneyweb comments are being filled with Trump-style conspiracy shots that are big on adjectives and short on logic.

Give me Trump over a nutless Squirrel any day…

Or would you prefer a senile, corrupt, octogenarian who can’t remember what State he is campaigning in?

Keep ignoring the NDR at your own peril

If you’re looking for more info of how the things play out and how the ANC works and the NDR which almost everyone chooses to ignore, read some of R. W. Johnson’s pieces that he’s written this year.

Good place to start, then you can do yourself a favour and search for the documentary on YouTube called Tainted Heroes for more history of the ANC and what they truly are about along with the NDR.

Corruption is the trademark of the ANC. It started long ago with their brand ” Liberation Accounting “. How dare Mr Ramaphosa act ( or pretend to act ) against the ANC’s Nr 1 core value?