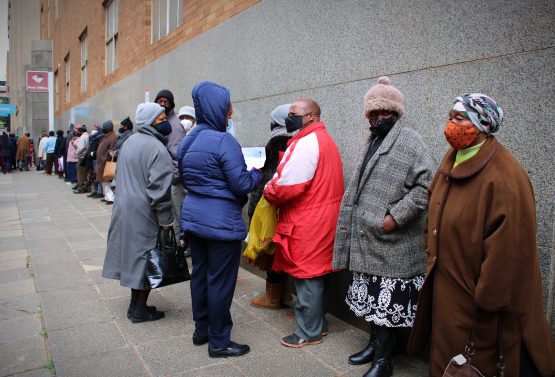 People going to the Mthatha main post office to collect their “Covid” Social Relief for Distress (SRD) grants, pay between R50 and R100 of their R350 grant to jump to the front of the queue.

Grant beneficiaries say security guards and a group of self-appointed residents, who call themselves the R350 queue marshals, sell the first 100 spaces to late-comers. People in the queue who object are threatened with sjamboks and knobkerries.

The other two nearest post offices, BT Ngebs and Mthatha Northcrest, only serve 80 people a day and do not have “marshals”.

On three separate days GroundUp found snaking queues right around the main post office. Most at the front had paid to be there. The marshals wait opposite the main door to collect their share of the R350 grant.

Those who refuse to buy space, like Siyamcela Honono from Sibangweni, say they are threatened. On Friday last week Honono arrived at 5am, Honono waited behind more than 200 people in front of him, many of whom had paid.

He said every cent of his grant means a lot to him.

“If the other two post offices were serving more people a day, we would not be paying these bribes,” he said.

Micco Lutshiti, from Ngangelizwe, said, “I arrived here at 6am and about 150 spaces were sold ahead of me.”

He said a “marshal” will simply tell a person that “he has 15 or 20 spaces in front of you that are reserved for his clients, and nobody argues with them”.

Mongezi Mayo, chairperson of the R350 queue “marshals”, said, “We have been marshalling the queue ever since these grants were introduced. We were assisting the police and soldiers to enforce social distance. At that time we used to sleep here because we were competing with amapara [drug users] who were also selling the space for R50.”

“But later we realised that the beneficiaries were being robbed by amapara after collecting their grants. Then we decided to group ourselves and become the queue marshals in order to make a living and protect the people from amapara. In total we are 25 including eight women,” he said.

“We are not forcing anyone to pay the money. But we are creating jobs for ourselves.”

Alfred Hlezeni from Mqanduli said, “Beneficiaries pass our numbers to one another especially those who live too far from Mthatha. I even provide them with accomodation and food if they arrive too late and can’t be helped by the post office. But I only charge them R50 for a space. Those whose grants have not been processed we even help them with taxi fare and we don’t charge them if their money is not available.”

Nomawethu Siba said she takes home between R150 and R200 a day. “Each member of our group is not allowed to sell more than four spaces a day,” she said.

Johan Kruger, national spokesperson for the Post Office, said the number of beneficiaries served depended on the number of tellers and the funds available. Also, some shopping mall managers restricted how many people may queue.

“The Post Office does not have control over the actions of members of the public outside our premises and we advise our customers not to pay a bribe,” he said.

He said people should report such activities to the police.

This is a terrible situation. This is opportunistic theft.
The police can easily deal with this.

The “marshalls” name is available and he’s openly admitting to racketeering. He should be arrested.

Hey Effy — These guys are just making a quick buck man
What is your problem boy???

Dude, the police are a major part of the problem; like asking the foxes to guard the henhouse. Get real …

What police?
Anyway, if you think it will help, go lay a charge.

This is how your tenderpreneur of a leader made his millions. Just a middle man jacking up the price while adding no value.

These are small-time hustlers. They should think bigger, much bigger, such as robbing banks, like your Fearless Leader and his girlfriend, Fatso Floyd, did.

When your political masters are thugs this is inevitable.

Jip — They cannot afford to be too late to clock in for their day jobs !!

Where are BLM when really needed, to busy with Quinton De Kock type issues, trying to make headlines for themselves!!??

Welcome to the SA reality! Bribes are the order of the day. Why should a certain former president be able to live in a R200m homestead while also having skimmed hundreds of millions at least from treasury, but these persons cannot share in the money?

Any ANC or EFF supporter cannot honestly speak out against these individuals and yet still remain blind to the rampant corruption performed by their cadres?

Democracy?… Nah, didn’t think so either

Like the Sicilian mafia “created jobs for themselves” …. errr …. what happened to ubuntu?

If this had taken place before 1994 it would have hit the headlines in the Guardian at least. The woke crowd would be foaming at the mouth and tearing their hair out. Now everyone says well what do you expect, it’s Africa, and they just move on. The same way Sharpeville will live in infamy and no one has yet been held responsible for the Life Esidimeni tragedy or Marikana. As long as the injustice is black on black it’s OK; the minute a white is involved, it’s racism. The previous regime were uncaring but this one takes it to new heights. And to compound it all, there is not a white face in sight at the post office.

As the ANC and its voters have zero skills, they only have one source of income, rent seeking from those less powerful than themselves. BEE, EWC, EE, this nonsense in Mthata, all the same vice – ‘you have, I did nothing to contribute to its existence but you MUST give some to me’ aka it’s my time to eat. They prey on their own yet those people will still vote ANC! Africa’s curse

Just another scam under the “new dawn”. Nothing unusual in S.A.’s continued fall into “failed state” classification.
Again, nothing will be done about this scam . . . so just continue and accept that this is yet another African tax.

The pay-day queue mafia fulfills a similar service to the investment managers.

Investors pay wealth managers to give them money in 30 years’ time. The grant recipients pay the line mafia to get other people’s money immediately.

This describes the reason for the “inequality” between the two groups. Inequality is the result of instant gratification. People basically think themselves poor. Their thought processes manifest as poverty.

N9bb0dy robs a fellow African quite like a african.

None so cruel to their own kind as this lot.

True. This issue completely confounds me no end. I simply can’t get my head around it.

For a good read and a good laugh, read “Everyday Ubuntu: Living Better Together the African Way.” The blurb reads: “Exploring ideas of kindness and forgiveness, tolerance and the power of listening, it shows how we can all benefit from embracing others.” Now, if that does not describe our South African philosophy, nothing does… Here we have actions seemingly condoned by our autocrats where people who live in poverty are openly, brazenly extorted. I cannot understand why we continue victimising those who need the most assistance: women, children, the indigent. How sickening.

Cut these thugs off. Only pay relief grants into bank accounts and have “Bank Zero” register them. No bank fees for covid grants.