South Africans are doing whatever they can to feel safer.
By Kim Harrisberg and Anastasia Moloney, Thomson Reuters Foundation 19 Oct 2019  00:06 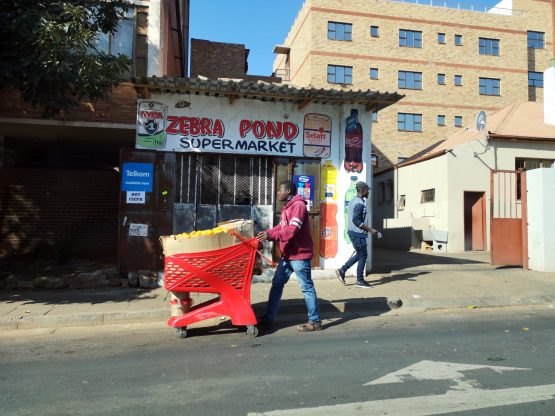 South Africa has one the world's biggest private security industries, with more than 9 000 registered companies and 450 000 active guards. Image: Moneyweb

Mothibi Pheko’s gun rested across his bullet-proof vest as he patrolled a lush Johannesburg suburb backed by an array of high-tech tools to combat South Africa’s notoriously violent thieves.

As he pulled over to check on residents, staff in the nearby control room monitored surveillance camera feeds from around the properties.

“We are proactive when it comes to crime prevention, not only reactive,” said Pheko, who works with local security firm 7Arrows, pointing out several closed-circuit television (CCTV) cameras on different corners of the Sandown gated community.

“Every person has a right to be safe.”

A growing number of cities worldwide are using advanced CCTV systems and forensic tools like DNA databases to tackle crime, raising concerns that privacy is being lost while criminals are merely being pushed to poorer areas with less surveillance.

Security experts say state-of-the-art gadgets are no substitute for efforts to address underlying causes of crime, such as high unemployment and inequality, or to reform corrupt and overburdened law enforcement agencies.

To speed up its response, 7Arrows buys live footage from 1 500 CCTV cameras around Johannesburg – set to increase to 15 000 by February – that can read licence plates in high definition and use thermal detectors for poor visibility.

“Vumacam’s vetted clients who have access to view our feed can choose to overlay a number of software options that will help generate alerts,” said Ricky Croock, chief executive officer of Vumacam which is rolling out the cameras.

“Analytic software filters out 95% of footage and only unusual behaviour is sent to clients who then decide whether to dispense a security vehicle.”

South Africa has one the world’s biggest private security industries, with more than 9 000 registered companies and 450 000 active guards, according to the Private Security Industry Regulatory Authority – far outstripping police numbers.

Barbed wire, electric fences and panic buttons are a part of everyday life in a country with more than 20 000 murders a year – the world’s fifth highest murder rate in 2019, according to the United Nations Office on Drugs and Crime.

Senior officials have compared parts of South Africa to a war zone. The army was deployed to seal off part of Cape Town in July to rein in a spate of gang-related killings.

Read: Army pulls out of violent Cape Town suburbs after show of force

“South Africans absolutely normalise what is crazy for anyone else,” said Mandy Pienaar, a Johannesburg media executive who three years ago was hijacked in her car and robbed at gunpoint.

“We do have a very false sense of security living behind our walls, with our alarms and our big guard dogs.”

Tech innovations like Vumacam’s CCTV roll out have attracted criticism from civil rights groups in South Africa who say they risk worsening the divide between rich and poor – in what is already the world’s most unequal country by income, according to the World Bank.

“Those that can afford to are turning more to private security who are essentially making a profit out of crime,” said Thami Nkosi from the Right2Know organisation, which has raised concerns about people being surveilled without consent.

“CCTV cameras don’t reduce crime, they displace crime … They just make criminals more sophisticated: they will put on balaclavas, use inside contacts, speed up their pace. We are not dealing with the root causes of crime.”

In the past decade, city mayors have invested hundreds of millions of dollars in social development projects and urban renewal to help bridge the gap between rich and poor and reclaim areas that were once controlled by gangs.

There are fewer night-time gun battles since the death in 1993 of city drug lord Pablo Escobar, who ran the world’s largest cocaine cartel, though gang violence hotspots persist.

Medellin’s crime prevention approach focuses on finding alternatives to keep teenagers off the streets and away from gangs who – often with the nicest clothes, motorbikes and money in their pockets from drug dealing – can easily lure them in.

About 3 000 young people in Medellin belong to gangs or risk being recruited, according to the mayor’s office. Often armed and fighting over turf, neighbourhood gangs control drug trafficking and extortion and prostitution rackets.

Six months ago, Johan Rodriguez received an unexpected knock on the door from social workers at his home in a gang-ridden Medellin hillside slum offering him work or training as part of a new programme to keep vulnerable young people away from crime.

“I was mixed up with the gangs then and I was consuming drugs,” said 25-year-old Rodriguez, one of nearly 1 000 young people aged between 10 and 28 taking part in the “Parceros” or “Mates” project, which city hall launched last year.

It offers support to go back to school, get job interviews and set up small businesses, from textile to DJ companies, as well as activities that help young people make friends across the invisible borders that divide gang territory.

“While the violence is always there, the project showed me there’s something else around the corner, another way. It opened up my eyes,” said Rodriguez, who works in a motorbike factory after social workers sent his CV to employers across the city.

“What I liked the most is that it taught me if you were violent, you felt powerful on the street. But I learned that a person is powerful when they have a peace of mind inside and are happy with themselves.”

The programme includes yoga, breathing exercises to deal with anger, and challenges including diving into a swimming pool covered with ice and walking over hot coals.

“The point of the exercises is to show us that we can achieve goals and overcome our fears,” Rodriguez said.

Colombia and South Africa are both highly unequal countries struggling to find ways to move on from violent pasts and reduce widespread corruption and unemployment.

Community projects like the ‘i was shot in joburg :)’ shop, which sells photos taken by homeless children at risk of drugs and gang violence, seek to provide alternatives to crime.

In Pheko’s Diepsloot township, 30 km north of Sandown where he works, people pay R20 a month for community-run patrols.

“We see projects come and go if they are functioning in isolation,” said Stewart Barret, director of Navan Consulting, which analyses future trends in South Africa, calling for better trained police, more jobs and well-functioning schools.

Security innovations like Vumacam and Aura – a mobile platform which summons armed responders – are looking to work more closely with the police.

“We know that without the improvement of social and economic issues in the country, we are simply repeatedly filling a broken cup,” said Warren Myers, founder of Aura.

The police are working on a pilot project with private security companies, said police spokesman Brigadier Vishnu Naidoo, declining to give more details due to confidentiality.

“The South African Police Service welcomes and encourages the involvement of private security in the fight against crime,” he said. “They complement our efforts.”

Meanwhile, South Africans are doing whatever they can to feel safer, said Jason Mordecai, managing director of 7Arrows.

“People are building their own camera surveillance with equipment bought online. They are using Whatapp groups to share information,” he said.

“The irony is that sometimes the security walls become so high that you never speak to your neighbours. We become more and more anonymous to one another as we try to hide from crime.”

Back in Sandown, Pheko hit the accelerator as an alarm went off in a nearby house. As he leapt out of his car, his radio buzzed.

“False alarm,” he said, adjusting his gun to continue his daily patrol.

One day the anc’s want to disband and disarm private security, the next they praise them as indispensable?

Our so called “ government just haven’t a clue how to manage anything as they stagger from pillar to post, blinded by their miasma of incompetency!