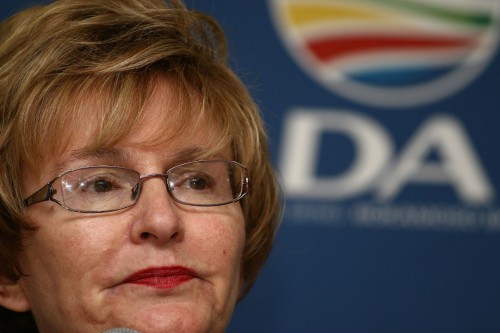 “I have decided not to make myself available for re-election as leader” at the party’s May 9 federal congress, Zille, 64, told reporters in Johannesburg on Sunday. The decision “is in the best interests of the DA and South Africa as a country,” she said.

Zille, a former journalist and anti-apartheid activist, helped to boost the DA’s support in last year’s election to 22.2 percent from 16.7 percent in 2009. Still, the party has struggled to gain traction among black voters and is under pressure to choose a black leader. Mmusi Maimane, 34, the DA’s parliamentary head, is one of the party’s senior black members and a potential successor to Zille.

“The DA cannot go into the next election with a white leader,” Piet Croucamp, a lecturer in political science at the University of Johannesburg, said by phone on Sunday. “There will be a bit of a contest, but I will be very surprised if Mmusi Maimane is not elected.”

South Africa will hold municipal elections next year. Zille will remain premier of Western Cape until 2019, the only province out of nine in South Africa that isn’t controlled by the ruling African National Congress.

Maimane declined to say whether he will contest the top leadership post, according to Johannesburg-based news channel ENCA.

“Change is never easy,” he said in an interview with the broadcaster. “The DA has always been proud to create teams, we’ve always had fantastic leadership teams, broad leadership teams.”

The party was created 14 years ago from a merger of the Democratic Party, the Federal Alliance and the New National Party, an offshoot of the National Party that governed during white minority rule.

“I am not going to get involved in succession discussions,” Zille said. “There have been a couple of nominations, but nobody known to me.”

Zille was one of the journalists at the Rand Daily Mail who exposed the cover-up of Black Consciousness leader Steve Biko’s death in police custody in the 1970s.