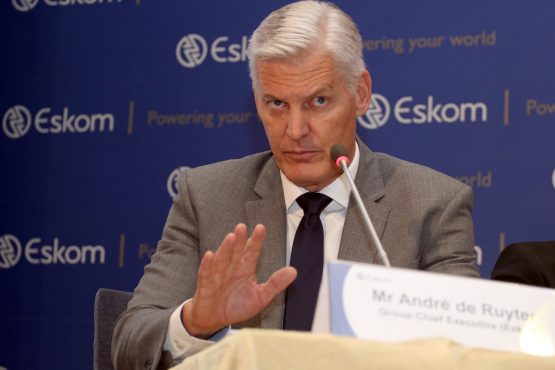 Eskom CEO André de Ruyter is going nowhere. The board has not discussed his resignation with him and he will not hand it in of his own accord.

Facing sharp questions about the current round of Stage 4 load shedding from up to 500 journalists at a hastily convened media briefing on Tuesday afternoon, a tired-looking De Ruyter said Eskom needs continuity in leadership and he is staying put.

De Ruyter’s response comes after calls for his resignation – from among others the Black Business Council (BBC) and the National Union of Metalworkers (Numsa) – in light of Eskom’s continued inability to provide stable power supply to the country.

In recent days Eskom has blamed a shortage of diesel, negligent staff, maintenance delays, procurement delays, lack of money and a power blackout in Zambia for the blackouts South Africa has been suffering on and off since October.

On Tuesday the utility added to the list municipalities and large power users that do not comply with the load shedding instructions, which De Ruyter said led to Eskom intensifying load shedding from Stage 2 to Stage 4 this week.

Group executive for generation Segomoco Scheepers refused to name the errant clients and municipalities, saying the list of municipalities “is quite long” since only Buffalo City and eThekwini did comply.

Scheepers said Eskom has written to these non-compliant councils.

When pressed on details he confessed that “not all of the 160” odd municipalities were non-compliant. “We looked at the bigger municipalities.”

He did not answer a question about the extent of the shortfall in volume shed in response to the Stage 2 instructions.

On Monday (November 8) the total demand was 30 440MW, according to data tweeted by Eskom spokesperson Sikonathi Mantshantsha.

He welcomed the recent announcement of the winning bidders in the Department of Mineral Resources and Energy’s fifth round of renewable energy procurement from independent power producers.

These projects still have to reach financial close, and it will take around two years thereafter before they come to the aid of the struggling Eskom.

Eskom’s hopes for the rest of this week

De Ruyter and Oberholzer both gave the assurance that the Eskom power system is not close to total collapse.

Oberholzer said the Eskom system operator is among the best in the world at managing a constrained system.

He also called on energy analysts to refrain from making irresponsible statements about the likelihood of a total blackout.

Read: Eskom is being reset: CEO sets out how

De Ruyter, when asked why his expectation shortly after assuming the top job at Eskom that power supply would stabilise within 18 months was not fulfilled, pointed to three issues.

He said firstly Eskom lost six months in its maintenance programme due to the impact of Covid-19. Secondly, the pressure on Eskom’s liquidity further restricted the ability of the finance team to release funds for maintenance. And in third instance, he did not fully appreciate the challenges posed by government’s procurement rules.

He added that Eskom cannot within these restrictive rules appoint competent contractors swiftly, efficiently and properly resourced with spares and everything they need to do the job.

Of course you shouldn’t resign. This mess is not one person’s making and someone has to fix it. If you don’t do it then the next person will promise to do so and so on and so on.

Why doesn’t someone start at the 77 day procurement process for goodness sake, is this government serious about growth or what.

Whatever happened to the unbundling process wherebye Eskom was to be split into 3 separate sections?

Pleeease don’t resign, even though I wouldn’t have this job for all the money in the world!! Assign more bodyguards to this man, he is the best hope SA has got right now of ever seeing the light consistently again.

Guys I worked for Eskom first as a consultant and then I started doing business with Eskom, I spend many years there-I tell you this just for some back ground.I sold my company because it became impossible to do business without bribing.

What happened at eskom is insane. About 15 % of the staff there are competent and really working themselves to the bone to keep the lights on,30 % sort of do something and the balance consists of people that do almost nothing or are actively sabotising the system (for their own gain).

Under our beloved goverment the reason for eskoms existance became to transfer funds from the “state” to corrupt individuals. The scale of this is insane. It is virtually impossible to do honest business with eskom as they have become a mafia business.

Now for the first time in a very very long time you have a competent ,hardworking and honest CEO (this could not be said about the previous CEO’s). We should never underestimate what this man has done/is doing for South Africa. The crooked ones are being investigated and procedures are enforced in an attempt to stop the looting.

Now the thieves and lazy’s are fighting back, they would love to get rid of Andre as he has become a bit of a problem for them.

I think Andre is close to superman, but even he cant fix eskom, the years of poor maintenance was just too much, eskom is basically an old and rusty car that if you fix one problem today, another two pops up tomorrow.

SA needs new generation capacity fast. And I dont mean the corrupt deal with the powerships, an honest deal for a period of +-3 years makes sense, but 20 years??? Imagine how much money the connected ones would have pocketed there…..

Eskom really needs to be de-centralized very very fast. In the menatime we run our peaking stations as baseload stations….

Please do not resign, but please deal with the crooks in Eskom! We need to build this economy and with the current supply — no way!