The country’s unemployment crisis is out of control.
By Prinesha Naidoo, Bloomberg 28 Sep 2020  06:20 South Africa is forecast to set an unwelcome world record this week when its statistics agency is predicted to report unemployment rose to a record 34.8% in the second quarter, which would be the highest of 83 countries tracked by Bloomberg.

Ayanda Mbatha was among the unlucky ones who joined the ranks of the unemployed in the period. Dressed in a shirt and tie, the 26-year old mechanical-engineering graduate spent four weeks at intersections in the affluent Johannesburg suburbs of Hyde Park and Sandton advertising his skills on a placard around his neck and with copies of his CV in his hand, in the hope a passing motorist could help with a job offer.

“Sometimes I’d think ‘I don’t have a job, I was retrenched, what am I going to do? There’s no salary coming in anymore’,” he said in an interview.

Mbatha is one of an estimated 3 million people who lost their jobs as restrictions to curb the coronavirus pandemic shuttered all but essential services in Africa’s most industrialised economy. Most business were shut for five weeks from March 27 and some reduced staff or closed down permanently because of the lockdown. A study by a group of 30 academics and researchers shows 1.5 million more people were furloughed.

A lot of the second-quarter job losses should be reversed once the economy opens up, but the question is by how much and how soon? We think the recovery will be protracted given the weak growth outlook. We also expect a slight uptick in the structural unemployment rate as some who were laid off during the crisis remain permanently unemployed. –Boingotlo Gasealahwe, Africa economist

South Africa faced an unemployment crisis even before the virus. The jobless rate has been above 20% for at least two decades, even though the economy expanded by 5% or more a year in the early 2000s. Analysts cite an education system that doesn’t provide adequate skills and strict labor laws that make hiring and firing onerous and apartheid-era spatial planning that make it difficult for job seekers to enter and remain in the formal workforce as part of the problem. 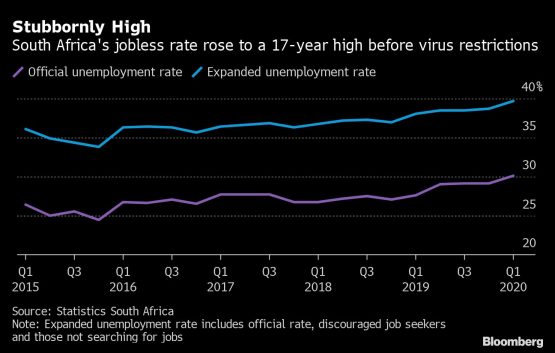 President Cyril Ramaphosa pledged to boost economic growth to 5% by 2023 and to prioritise employment when he was campaigning to become leader of the ruling party three years ago. Since becoming president of the country, he hosted a jobs summit that aimed to create 275 000 positions annually and launched a program to create job opportunities for young people.

The results have been patchy and a lack of urgency in implementing policies to boost growth and convince businesses to invest are hindering progress.

“A lot of the mismatch that we see between government solutions and the problems that we have is because government is making policy for an economy that doesn’t exist,” said Sithembile Mbete, a senior lecturer in political studies at the University of Pretoria. The crisis may get worse.

Just keeping the employment rate unchanged would require the economy — stuck in its longest recession in 28 years — to grow by 1.5% to 2.25% a year to match a 1.5% annual increase in the working-age population, according to Elna Moolman, an economist at Standard Bank Group. Population estimates show there are 59.6 million people in South Africa, of whom almost 30% will enter the labour market in the next decade.

“Based on scenarios for the post-2020 economic recovery, it could take three to seven years before employment returns to 2019 levels,” said Christie Viljoen, a Cape Town-based economist at PwC.

For the skilled Mbatha, pounding the pavement paid off.

A picture of him at the intersection was shared widely and made its way to a director of an automations company seeking a project engineer. He started work in September, after being jobless for four months, and is now using the network of recruiters and career coaches that reached out to help him to guide others.

If we were way less people in the world, things would’ve been better.

The unemployment figure proves that the ANC has successfully “redistributed” the capital base in the country. Rising capital formation is a prerequisite for job-creation. Employment opportunities depend on new factories, new mines and new investments in plant and equipment. Anti-capitalist policies like labour laws that incentivise and condone militant labour action, the redistributive rates and taxes regime, the high company tax, BEE requirements and the cost of electricity, punishes capital formation and motivates the flight of capital. Unemployment rises as capital formation shrinks.

This is the law of unintended consequences. The policies that are supposed to bring equality and social justice, delivered rising inequality, more poverty and the injustice of joblessness. The ultimate destination on this highway of the political-economy is fascism. The ANC policies create very promising opportunities for the EFF. The ANC is creating the environment in which the EFF will become the majority in parliament. It will be the staunch ANC supporters, through their support for ANC policies, who will ensure that Malema becomes president. The ANC supporters, because of their ignorance and short-sightedness, are their own biggest enemies. ANC supporters will put the EFF in power, not by voting for them, but by creating the socio-economic environment that supports the rise of National Socialism and fascism.

It was the policies of the previous Weimar Government that created the environment for Hitler to gain control.

It all starts by wanting to do a honest days work, even if they just do basic “jobs” for their own pocket and then actually stick with it !

LOL — Do not forget to vote and get your t shirt ne.

a pass mark just above 30% is not skilled. its below borderline.

would you like to be operated upon by a doctor who only knows 30% of his/her work?

@tito @ Cyril @ reserve bank governor – You lot can now import skilled labour from the rest of africa, this will help BEE requirements …

….SA citizen will be sweeping the streets

The key to creating employment opportunities is direct capital investment . Its not education. Education is a relative value. If everyone had PHDs, it will not yield above average wages. Problem is that 90% of all capital investments is actually only for speculation (gambling). If I buy R100 000 shares in ABSA I am transferring funds to another investor. No infrastructure or jobs will be created. However, with current policies ( EWC, BEE , high admin costs) capital will not be invested directly. Crime is also a large deterrent to direct investments. Only the government can fix these policies.

Well said and Zim is an example of good education meaning nothing at all. Malaysia the opposite.

So proto-Marxism doesn’t create jobs and destroys those already there? Who knew …

The obsession with race is a brutal obsession. South Africa is incapable of learning this lesson.

Cyril is now creating massive job opportunities: The dismantling and destruction of all “undesirable” monuments :The hammer and sickle being the used very effectively.!