FNB sets its sights on informal settlements in a bid to defend its position from banking rivals.
Emma Rumney, Reuters 31 Jul 2019  07:57 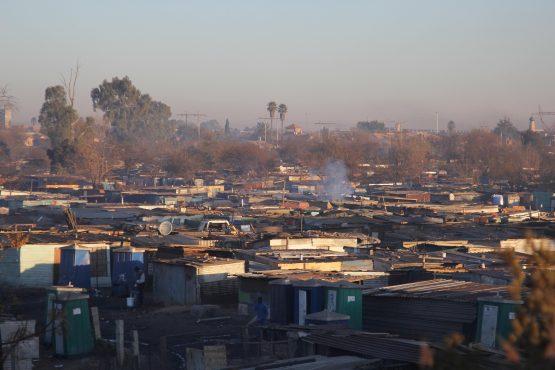 FNB is hoping its zero-fee offering will attract price-conscious entrepreneurs in townships, giving it access to data for cross-selling and growing the market for financial products. Picture: Moneyweb

Among the metal shacks and narrow side streets of South Africa’s townships, one of the country’s biggest lenders sees a sizeable market it wants to be first to crack: multi-million-rand businesses operating largely in cash.

FirstRand, South Africa’s biggest lender by market share, sees enterprises such as Ram Thapa’s, a beauty shop and fast-food outlet with combined annual turnover of R19 million but no business account, as ripe targets for a host of financial products.

Businesses in townships – areas designated for non-whites under apartheid – have largely been ignored by big banks in Johannesburg’s financial district Sandton, even though some have tens of millions of revenue a year, said Mike Vacy-Lyle, CEO of business banking at FirstRand’s retail unit First National Bank (FNB).

“Four kilometres to the right of Sandton is a township called Alex,” he said. “Inside Alex there are massive businesses and business networks that no bank has bothered to open their eyes to.”

FNB has set its sights on the townships as it prepares to defend its No 1 position from rival Capitec and new digital lenders such as TymeBank and Bank Zero which have shaken up the retail market with cheaper products and are poised to enter business banking.

There are estimated to be up to 5.78 million micro-, small and medium-sized enterprises in South Africa according to a 2018 report by the World Bank, and while there is no recent data on the proportion of those firms which have a bank account, a 2010 survey cited in the report estimated it was less than half.

FNB plans to attract unbanked businesses onto its books by first getting them to use fintech firm Selpal. The bank acquired an undisclosed stake in the company late last year.

Selpal connects local stores with suppliers via software and tablets. Once a customer is using Selpal, FNB will use the data it collects to offer them an account with, for example, an overdraft attached. The bank is launching a business account in October with zero monthly fees though customers will pay as they use a range of transactions.

In order to succeed, FNB will have to overcome a strong attachment to cash-only transactions, general mistrust of banks, paperwork problems and low margins.

Reflecting that challenge, Vacy-Lyle said it could take up to a decade to sign up at least 600 000 companies. By comparison, it took Capitec five years to add more than 600 000 retail clients.

Rivals including Capitec, as well as Absa, Standard Bank and Nedbank – which together with FirstRand make up South Africa’s big four – told Reuters they don’t have plans to target unbanked township businesses specifically.

In a statement, Gerrie Fourie, chief executive of Capitec, said its plan was to focus on the SME market as a whole. Michael Jordaan, co-founder of Bank Zero, said it would target all businesses.

Luisa Mazinter, chief marketing officer of TymeBank, said its business offering would initially be targeted at sole proprietors and micro businesses, allowing current account-holders to open a separate account for their business with no extra documents required.

In the longer-term, TymeBank will adapt the offering to appeal to both formal and informal enterprises and aim to introduce its own point-of-sale devices, Mazinter said.

Bongiwe Gangeni, deputy CEO of Absa’s retail and business bank, said a number of attempts over the past decade to target unbanked companies, including with loans and point of sale devices, had not generated enough revenue to justify the costs.

She said the issue wasn’t always about access. “I think some of them choose not to be banked.”

FNB declined to quantify the income it is hoping to generate from township companies.

On the face of it, lenders in South Africa are relatively well represented among the general population with more than 80% of adults having access to a current account, according to a 2018 report by FinMark Trust, a Johannesburg-based financial inclusion organisation.

But in many communities, cash is still king. A bank account is often a condition of employment or receipt of social payments, and many people withdraw money as soon as they receive it and just use notes and coins.

Only 24% of South Africans make more than three monthly transactions of any kind through their account, according to a report by Boston Consulting Group in 2017.

Some people are wary of formalising their financial arrangements in case it puts them on the taxman’s radar. Many are also mistrustful of digital methods of payment, as well as the financial sector in general after mis-selling and corruption scandals, and prefer to pool savings in community-based schemes.

In his shop, choc-a-bloc with hair and beauty products and mannequin heads wearing wigs, Thapa said he’d prefer to have a business bank account. Right now, he doesn’t have access to credit and is relying on a point of sale device linked to his brother’s business so he can serve card paying customers.

“You know, this area is very dangerous,” he said, counting the number of times he had been robbed – three – on his fingers.

Bureaucracy is a big hurdle for small enterprises looking to tap traditional finance.

A handful of unbanked businesses Reuters found across two townships were, in almost every case, owned by immigrants or asylum seekers and cited a lack of the right documents – a factor outside of banks’ control – as the main reason their business didn’t have an account.

“When you want to do things, they want a business account,” said Vusi Coka, a South African running a tavern in Alexandra. He is struggling to get a mortgage because he can’t show banks how his business is performing.

He can’t open an account for the tavern because it belonged to his late father, and the title hasn’t been transferred into his name.

High fees are another barrier. Digital players have been able to make inroads in the retail market with cheaper products because, unlike traditional banks, they are not lumbered with expensive branch networks that push up costs.

FNB is hoping its zero-fee offering will attract price-conscious entrepreneurs in townships, giving it access to data for cross-selling and growing the market for financial products.

With Selpal serving as a “trojan horse”, Vacy-Lyle said the lender is looking to bank 2 500 township wholesalers by 2022, and after that will look to bring in grocery stores, known as spazas, and taverns, as well as firms like hairdressers and auto repair shops.

While making it easier for such businesses to access financial services, especially credit, was a positive, Brendan Pearce, chief executive of FinMark Trust, said there was a question mark over whether they could make informed decisions.

“There’s a financial literacy issue,” he said, adding fintech firms or others with a more specific focus could usually offer better products at better prices.

“I’m not convinced commercial banks have the solution to financial inclusion.”

Why would they want an account? So that they can be fingered to pay tax? Don’t think so.

Dream on, FNB. The minute they open an account, SARS is going to get its hooks into the business, and make them pay the tax they’ve been evading since forever. There is just no way any cash business wants to have its transactions go though an easily traceable bank account.

One must be careful to think the only reason why something is not being done is because no one have thought of it….that is hardly EVER the case! But, go for it! Good luck!

Yes, I would encourage FNB to proceed with the aim of formalising the previously unbanked sector. SARS will certainly need the tax from profitable cash businesses….as the article states there are “massive businesses” operating in the Alex area alone. High that everyone starts pulling some tax weight!

There is a certain cyber risk with banking products on mobile phones for this market, I hope app developments makes it tamper proof?

Regarding bank compliance, has FNB contemplated how they are going to practically implement FICA for these informal addresses? Or will the product be specially exempt from FICA?

Where’s African Bank’s similar initiative? (Fast asleep? Or perhaps you know this market best, i.e. what serves the people best, and what does not?)

I wonder how many of these successful businesses invest in the future of the people who live there and support their business. Don’t see any evidence of sustainable investment into the environment, education, social services or even rubbish collection. No taxes paid either….so no meaningful contribution to society. Oh how the meek shall inherit the earth!!!!