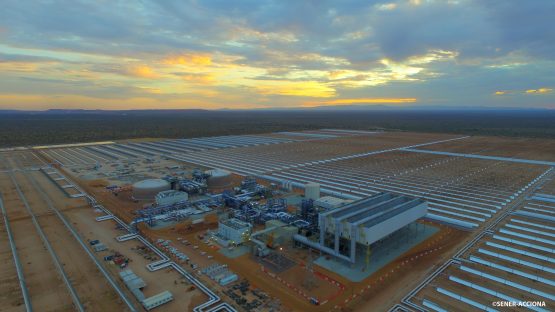 This is the opinion of Siyabonga Mbanjwa, regional MD of global engineering and construction group Sener. Sener has designed and constructed the 50 megawatt (MW) Bokpoort CSP plant near Groblershoop in the Northern Cape.

Bokpoort has more than nine hours’ worth of energy storage capacity, which means it can provide electricity day and night during spring and summer and during daily peak periods in autumn and winter. The plant has been in operation for almost three years.

Sener’s 100 MW Kathu CSP project, also in the Northern Cape, was synchronised to the grid last month and its 100 MW Ilanga CSP project situated near Upington went into commercial operation last week. Both of these plants have five hours’ worth of energy storage, which means they can support the electricity supply during daily peak demand periods.

Mbanjwa says Sener welcomes the large allocation for renewable energy in the draft IRP. The document, which maps the country’s future energy path up to 2030, has provided for the roll-out of 5 670 MW of new photovoltaic (PV) generation capacity beyond what government has already committed to, and 8 100 MW of additional wind generation capacity, but now new CSP beyond those projects already committed to.

The plan further provides for 8 100 MW of new gas generation capacity, which is apparently the technology chosen to balance the intermittent renewables.

The draft IRP was based on the least cost scenario, but allowed for certain policy interventions, including the possibility that excluded technologies could replace the gas, wind and PV allocations if they provide “similar technical characteristics at similar or less cost”.

According to Mbanjwa, the Department of Energy’s (DoE) assertion that CSP and other excluded technologies could on that basis be included through ministerial determinations is not good enough. He says it leaves a lot of uncertainty about the timing and extent of further roll-outs of such technologies.

He proposes a policy intervention to provide for at least 1 050 of additional CSP and says government could procure this with an “aggressive but realistic price cap”.

While he would not put a number to the proposed cap, he said the cap in the DoE’s bid round 4.5 in November 2015 was R1.37 per kilowatt hour (kWh), with at least one project coming in at R1.11/kWh. Since then prices have dropped further – and when bid window 5 is announced after the finalisation of the IRP CSP, prices should be well below the price of Eskom’s new Medupi and Kusile coal-fired power stations.

CSP independent power producers were in the later rounds also incentivised with higher tariffs for power production during periods when the sun or wind sources were unavailable. These incentive tariffs are benchmarked against the high cost of running open-cycle gas turbines, which Eskom does currently, Mbanjwa said.

He says there is still a lot of uncertainty around the sources of gas as well as the price at which gas-generated electricity will come in. The gas to power procurement programme should start without delay, he says, but also suggests that the allocation for gas generation be cut somewhat to provide for some CSP.

He warns that the total exclusion of CSP will have unintended negative consequences.

Projects were developed for the cancelled bid window 4.5 and are ready to participate in the expected bid round 5. If this doesn’t materialise, stakeholders would have wasted a lot of time and cost, he says. The local CSP industry has developed specialist knowledge through the early projects and has done a lot of research. He says it would be detrimental if the country fails to build on the lessons learnt so far.

The industry offers huge opportunities for localisation and industrialisation. Components that are currently imported could be built locally if the industry is assured of government support in future, Mbanjwa says.

He says all of these factors should be taken into account and could tip the scale away from the least-cost option.

Sener is currently also researching hybrid models with PV and CSP combined in one project and sold at a blended tariff.

Mbanjwa says when government considers the kind of policy intervention he suggests, security of supply should be one of the criteria. Currently coal and nuclear are the only options considered with regard to security of supply, while CSP with energy storage could fulfil the same role.

In addition to that, CSP is carbon-free and sustainable, especially with regard to water use, he adds.

Typical of SA shooting ourselves in the foot. We were starting to a country to be looked up to in terms of renewable energy projects and how we are destroying the businesses that were becoming world leaders in this line. They will move to other countries.
What do we get? – union supported coal projects – so 1800s.
I see the dead hand of Eskom here – just privatise the energy sector and then we will get our energy from the least cost producers.

Warren Buffet says you should never ask a barber if you need a haircut. Fair enough as there are vested interests involved. Likewise one should not take advice from the MD of Sener in this regard. DYOR. Be that what it may, let’s do some maths. KaXu Solar One is one of the flagships CSP suppliers in South Africa. One assumes this will be competing with coal. KaXu Solar One can produce 329GWh per annum energy. Let’s compare it with a typical coal fired power station such as Duvha (near Witbank) which can produce about 31500 GWh per year. Thus we would need about 96 KaXu Solar One’s just to replace Duvha. Since KaXu Solar One cost $860 million these 96 clones would cost $82.5 billion USD or about R1136 billion at R13.78/US$. This is almost identical to the annual tax revenue of SARS being about 1200 billion. Now let us look at footprints. KaXu Solar One has a footprint of 1100 Ha or 11km2. Our 96 clones would take up an area of over 1000km2. This is 2.5x the metropolitan area of Cape Town which is staggering. Just to replace Duvha. Q: is this remotely practical as one would still require a backup?

Calling KaXu (with a mere 2.5 hours of energy storage — the first concentrating solar plant in South Africa) a “flagship solar supplier” is a bit like calling Cugnot’s 1769 steam powered monster a flagship automobile.

And disregarding economies of scale and the learning curve is directly against basic economics.

It probably makes sense to include CSP with a cap of R1 for normal hours and something around there for peak hour dispatch. A combination of solar, distributed wind, hydro with pump storage, CSP, gas and coal could in theory be a balanced generation set. I have seen graphs that show SA wind patterns could lead to wind plants being distributed in a way that the power they generate is almost constant and solar/CSP could add to that mix. Throw in some storage to balance the grid and it all looks quite feasible.

Concentrated solar power can serve as a peaking technology; it’s useful and flexible

Concentrated solar power can serve as a peaking technology; it’s useful and flexible