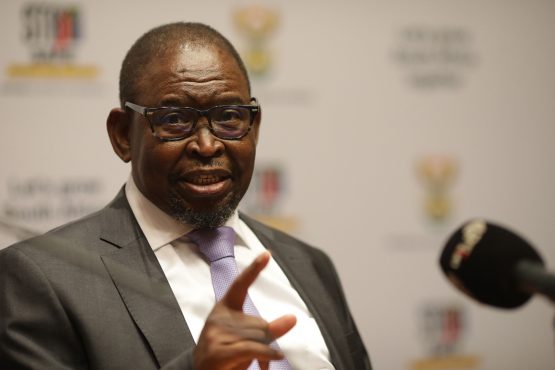 Finance Minister Enoch Godongwana announced the increase in the foreign investment allowance for pension funds during his 2022 budget speech. Now the plan has been gazetted. Image: Dwayne Senior/Bloomberg

Changes to Regulation 28 of the Pension Fund Act, and especially the increase in the proportion of a retirement fund that asset managers can invest offshore, have been discussed since 2019, when National Treasury first mentioned that it was time to update regulations. These changes to legislation were gazetted this week.

Treasury reiterated that the specific subsections of the regulation, commonly referred to as Reg 28, aims to protect retirement fund members by imposing limits on investments in a particular asset or in particular asset classes to prevent excessive concentration risk.

In short, the regulations force pension funds to reduce risk to retirement funds by diversifying investments.

Although Reg 28 enforced diversification, asset managers have complained that certain of the limits restricted prudent fund management principles, in particular the previous requirement that a retirement fund can invest a maximum of 30% of its assets offshore, as well as another 10% in African countries.

The offshore requirement is one of the most significant changes of Reg 28.

The 30% international and 10% African allowance have been replaced with a single offshore limit of 45%.

Read: Pension funds may now invest up to 45% of their capital offshore

In addition, pension funds will be allowed to increase their investments in infrastructure projects as the new regulations recognise infrastructure as a separate asset class.

Limits for the percentage a fund may invest in private equity funds and hedge funds have also been increased.

“The regulations widen the scope of potential investments for retirement funds, but continues to leave the final decision on any investment to the trustees of each fund, who determine the investment policy for any fund,” says National Treasury in a short explanatory note to the gazetted changes.

The effect of increasing the limit for offshore investment from 30% to 45% has led to speculation that billions worth of investment funds can leave SA. However, the most recent Alexforbes Manager Watch survey of retirement funds found that most investment managers were already on or very close to the previous offshore allocation of 30%, while some have actually increased their exposure to domestic equities, as local companies were seen to offer better value than international shares.

The Alexforbes Manager Watch, analysing investments at the end of 2021, found that “most managers still remain close to the limits of 30% for investment in international assets allowed by Regulation 28 of the Pension Funds Act.

“Nedgroup [Balanced] was the lowest at 18.9% followed by ClucasGray on 19.3%. Oasis had the highest exposure to international assets at 38.5%, which we infer includes some exposure to Africa equities,” says Alexforbes.

It noted that while most managers kept their domestic asset allocation relatively stable, some increased their allocation to domestic equities over their positions in December 2020.

Referring to Finance Minister Enoch Godongwana’s announcement in the February 2022 budget speech of the increase in the foreign investment allowance for pension funds, Alexforbes said: “It will be interesting to monitor how asset managers respond to this decision. Future iterations of the Alexforbes Manager Watch will include such detail.”

Glacier by Sanlam welcomed the increase in offshore investments from an effective 40% (30% world and 10% Africa) to 45%, with no distinction made between Africa and the rest of the world.

“This is welcome news as it allows retirement fund members to further diversify their investments. However, a credible argument can be made that it hasn’t gone far enough,” says Sanlam.

“Savers are forced to have 55% exposure to domestic assets within their retirement portfolios when South Africa’s contribution to global GDP is a mere 0.6%.

“This 55% exposure also needs to be considered within the context of the typical saver’s entire exposure to South Africa which may be north of 90% when one considers that their jobs are based here, as well as their primary residences. They also face a dwindling number of investment opportunities as a result of companies delisting from JSE,” adds Sanlam.

It also noted that it is “irresponsible” to focus on the preservation of capital in rand terms, as the rand continues to decline against other currencies.

The most recent decline in the value of the rand to above R16 per dollar – seemingly heading to R17 – proves this argument.

Treasury says that the final amendments published in the Government Gazette aim to explicitly enable and reference longer-term infrastructure investment by retirement funds, by increasing the maximum limits for investments in infrastructure.

“To further facilitate the investment in infrastructure and economic development, the limit between hedge funds and private equity has been split. There will now be a separate and higher allocation to private equity assets, which is 15% (increased from 10%),” it notes.

“A limit of 25% has been imposed, across all asset classes, to limit exposure of retirement funds to any one entity (company),” says Treasury.

Futuregrowth Asset Management says that while the changes in limits were largely driven by National Treasury’s aim to create a more enabling legislation for retirement funds to invest in infrastructure and related assets, the fact is that funds could previously invest in these opportunities off the back of Reg 28’s unlisted asset allowance of 35%.

“In the context of infrastructure, Futuregrowth supports the drive to make retirement funds more aware of alpha-adding opportunities in this space – and thus the real role that the retirement fund industry can play in assisting economic growth through such investments, while earning risk-adjusted returns,” it says.

“We are, however, still of the view that the final definition of infrastructure as now defined within Regulation 28 remains broad and, as a result, could have unintended consequences,” it notes.

“Listed instruments [both equity and debt] could be considered as infrastructure [MTN, Vodacom, Netcare, etc], which is especially problematic given that National Treasury has placed an overall 45% cap on infrastructure investments.

“It is therefore likely that many retirement funds will bump into these limits very quickly without the release of any guiding principles from National Treasury on what is considered infrastructure,” adds Futuregrowth.

It also notes that SA has a huge shortfall to fund the development of infrastructure over the next two decades, in that around R1.8 trillion will be needed. Pension funds can play a meaningful role in this regard as many haven’t made much investment in this sector due to lack of understanding and/or fear.

“We congratulate those pension funds that have already made meaningful investments in infrastructure and related investments, and we know that they are willing to invest further,” says Futuregrowth.

“Retirement funds will continue to be prohibited from investing in crypto assets,” it says.

“The excessive volatility and unregulated nature of crypto assets require a prudent approach, as recent market volatility in such assets demonstrates,” it adds.

Headlines of failing cryptocurrencies and trading platforms, as well as trading scams and missing millions, suggest that this ban is likely to remain in place for a long time.

Treasury reiterated that retirement funds have a fiduciary duty to act in the best interest of its members whose benefits depend on the responsible management of fund assets.

“This duty supports the adoption of a responsible investment approach to deploying capital into markets that will earn adequate risk adjusted returns suitable for the fund’s specific member profile, liquidity needs and liabilities.

“Prudent investing should give appropriate consideration to any factor which may materially affect the sustainable long-term performance of a fund’s assets, including factors of an environmental, social and governance character. This concept applies across all assets and categories of assets and should promote the interests of a fund in a stable and transparent environment,” it says.

[TOP STORY] How Fomo can drive investors to take everything offshore

[TOP STORY] JSE driven by China over past decade

[TOP STORY] How Fomo can drive investors to take everything offshore

[TOP STORY] JSE driven by China over past decade