ANC backs Thursday no-confidence motion in parliament. Elite police swoop on Gupta family home. Zuma hits out at the ANC. And then, at 10.30pm, resigns.
By Reuters 14 Feb 2018  07:52 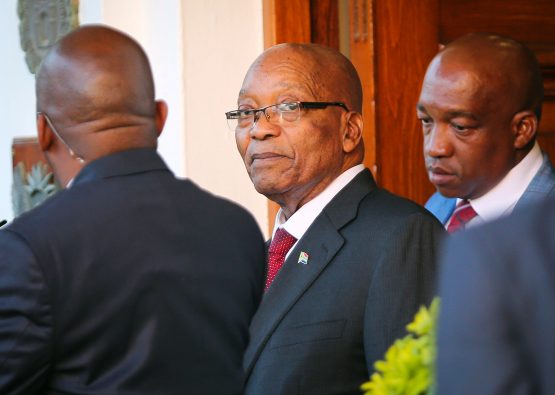 Zuma said during an hour-long interview with the SABC that he has done nothing wrong. Picture: GCIS

Jacob Zuma resigned as President of South Africa on Wednesday, reluctantly heeding orders by the ruling African National Congress (ANC) to bring an end to his nine scandal-plagued years in power.

In a 30-minute farewell address to the nation, 75-year-old Zuma said he disagreed with the way the ANC had shoved him towards an early exit after the election of Cyril Ramaphosa as party president in December, but would accept its orders.

“I have therefore come to the decision to resign as president of the republic with immediate effect,” Zuma said.

“Even though I disagree with the decision of the leadership of my organisation, I have always been a disciplined member of the ANC,” he said.

The ruling party had said it would vote him out on Thursday.

“No life should be lost in my name. And also the ANC should not be divided in my name,” Zuma said.

His resignation came just hours after police raided the luxury home of the Gupta family, Indian-born billionaire allies of the president who have been at the centre of corruption allegations against Zuma and his circle for years. Zuma and the Guptas have always denied wrongdoing.

The ANC, which replaced Zuma as party leader in December with Deputy President Cyril Ramaphosa, ordered him to step down as president on Tuesday. When he failed to resign on Wednesday, it announced that it would back an opposition motion in parliament to force him out.

His resignation ends the career of the former anti-apartheid resistance fighter, who has four wives, a sharp tongue and a decades-long history of entanglement in scandals that polarised Nelson Mandela’s “Rainbow Nation”.

The rand currency, which has gained ground whenever Zuma has hit political turbulence, soared more than one percent to a 2-1/2 year high of 11.66 against the dollar during the day, as pressure piled on Zuma to resign.

His party hailed his decision to go.

“This decision provides certainty to the people of South Africa at a time when economic and social challenges to the country require an urgent and resolute response,” said the ANC’s deputy secretary general, Jessie Duarte.

ANC chief whip Jackson Mthembu said before Zuma announced his resignation that Ramaphosa could be sworn in as new head of state as early as Friday. Ramaphosa, 65, was the ANC’s chief negotiator with South Africa’s apartheid rulers during the talks that led to the end of white rule, and is seen as a conciliatory figure who could help heal divisions that widened under Zuma.

Hours before Zuma’s resignation, South Africa was captivated by news of the early morning raid on the compound of his allies the Guptas, who were accused two years ago in a 350 page report by a corruption watchdog of using their influence to gain control of state companies and contracts.

“You can’t bring a matter of this nature to court and not charge the people who have benefited the most,” the source, who has knowledge of the police’s moves, told Reuters.

A Gupta family lawyer told Reuters none of the Gupta brothers were among those held.

The police said the raid was in connection with a state-funded dairy farm, which prosecutors last month called a “scheme designed to defraud and steal”.

Prosecutors have seized R220 million ($19 million) in state funds allocated to the project and froze bank accounts of one of the Gupta brothers, Atul Gupta. The Guptas’ lawyer declined to comment on the case.

Shortly after dawn, a dozen Hawks police officers sealed off a street leading to the Gupta mansion in Johannesburg’s upscale Saxonwold suburb. One blocked access to Reuters, saying: “This is a crime scene.”

Minutes later, an unmarked police van left the compound as residents applauded police officers and hurled abuse at security guards for the Guptas.

“Finally something is being done about it. These guys must get out of our country. They must leave us alone. They have done enough damage,” said Tessa Turvey, head of the local residents’ association, standing outside the compound’s iron gates.

Police also raided the Guptas’ Oakbay holding company in Johannesburg’s Sandton financial district, according to a security guard outside the building.

I wonder if they will check if the Saxonwold shebeen has a liquor license too?

I can picture the scene, like a SWAT team in a movie – Atul telling security to shred documents, flush stuff down the loo, shouting “Quick boys, the Hawks will be here any year now”

The same Cyril that kept quite for soooo long. This is what you call an opportunist. The likes of Pravin and Derek Hannekom are the true champions.

in the wake of all that is falling into place, it seems to me Cyril was actually quit a busy little man behind the scenes….expect no less from a man that outwitted Roelf Meyer and the rest of the NP’s at the negotiating table. Can’t compare him to Hannekom????

I also like CR however if CR is gone one day the next leaders in line will be the likes of Ace and David. Good luck with that one……Zuma 2.0. SA can’t afford another Zuma decade!

I hope this is not just window dressing…..until I see an arrest, I’m not holding my breathe!
Does anyone know who is funding the EFF or when our political parties will be required to be transparent about their donations and funding?

Is he now playing the victim card?

Well he can’t use the race card. It’s check mate and this time it’s not white versus black.

Presumably you haven’t actually watched his official resignation – he actually spent quite some time trying to play the race card – none of the major media outlets have commented on this, presumably in order to not give airtime to hatespeech.

It’s so unfair that I wasn’t able to totally destroy the country. I was only 70% there. They let my great friend Robert Mugabe destroy 99% of Zimbabwe so why not me?

“I don’t think it’s fair. I think it’s unfair.” Was it fair when YOU fired Nene, Pravin and Jonas ???? No reasons given. They did not grovel like YOU!!!

Nene and Pravin also did not protest:”I’ve done nothing wrong.”
It’s not only about wrongdoing but what have you done right ??

Just remember to flush the toilet after he’s dumped

Zuma has on numerous occasions referred to the ANC as a collective and that decisions are made as such, for example, it was the collective that decided he must serve a second term in office. So where was the collective when he unilaterally fired Nene and Pravin; when he did the midnight cabinet reshuffle and Gwede said it might as well have been drawn up at Saxonwold; when he unilaterally declared free higher education. Well the words “the ANC is a collective” is not a term he now proclaims.

Hey Jacob. Do you think the people who voted for you will agree with you? You are a psychopath. You still believe you have done nothing wrong.

Will a short shower to save water in Cape Town still rid you of HIV?