Bonds, tobacco and health care expected to shine amid the gloom
South Africans are losing trust in the state
Two weeks into 2020 and already almost 6 000 jobs are on the line
CLICK THIS COMPANY MORE COMPANY NEWS SENS
MASSMART Less than a month into 2020, South African companies have already announced thousands of job cuts. In a country where a third of the labor force is already unemployed, this will put even more strain on demand and economic growth.

Almost 6 000 jobs are at risk as companies including Telkom, the country’s largest fixed-line operator, and Walmart’s local unit Massmart plan to reduce their headcount after slumps in earnings. That’s after Sibanye Gold cut positions at its Marikana operations as part of restructuring plans and Glencore issued a notice of possible reductions at its Rustenburg ferrochrome smelter. 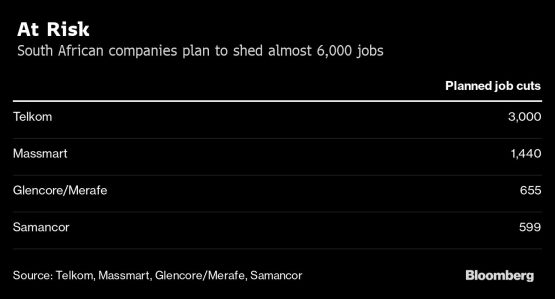 If realised, these job losses will add to an unemployment rate that is the highest in at least 11 years, and place a further damper on demand and consumption spending in an economy stuck in the longest downward cycle since World War II. Growth in household expenditure, which makes up 60% of economic activity, slowed to 0.2% in the third quarter despite a reduction in the benchmark interest rate. An economic blueprint that President Cyril Ramaphosa co-authored a decade ago aims to reduce joblessness to as little as 6% by 2030, but the government’s actions are not helping. In addition to a lack of urgency in implementing policies that’ll boost growth and convince businesses to invest and expand, the state and its companies are also reducing workers.

Finance Minister Tito Mboweni has made it clear the state wage bill has to be trimmed, and that means a government that employs fewer people. Despite opposition from labour unions, the restructuring of power utility Eskom, which has billions of dollars of debt and a bloated workforce, will lead to job cuts when it eventually happens. The national carrier, South African Airways, is in bankruptcy protection and started canceling flights on Tuesday to save cash, a step that could usher in a reduction in staff. South Africa’s unemployment rate has remained above 20% for at least two decades, largely due to insufficient economic growth. Since 2015, population growth has outpaced growth in gross domestic product every year.

That means the economy “doesn’t even begin to scratch the surface of what is required in terms of jobs for new entrants in the labor market,” Maluleke said. “As a result I think you’re going to see the employment rate grow.”

South Africa’s economy hasn’t expanded by more than 2% a year since 2013 and neither the central bank nor the National Treasury see it reaching that level by 2022.

The economy needs sustained GDP growth of 2.5% to 3% to stabilise and to reduce the unemployment rate, Maluleke said.

Dropping income tax would also make South Africa an tax haven for international companies who would open up businesses here which will result in more job being created.

Pass a law as well to force banks to lend more money to people to build affordable houses/flats for other people to buy or rent, instead of pumping money into the existing housing markets which just results in inflation. If the house prices and rent prices came down first time buyer would have smaller mortgages to pay and renters would have cheaper rents to pay which would result in them having more disposable income to spend in the actual economy on goods and services which would create more jobs. High house prices is just a sign of inflation i.e too many people chasing too few goods.

You could have a donkey as US President right and the US economy would still be doing well because of the Federal Reserve Bank and the American people attitude to support American companies products and services.

Typical economist IYI like you pushing on a strings in the economy and you can not accept somebody elected as obnoxious as Trump has anything good.

In SA the reserve bank is independent and we had donkeys running the government for more than 25 years with all sorts of progressive ideals yet SA is racing to Zimboland.

No, it is a fact a country requires somebody competent in power that can take actual measures to support its industries, not an economist.

A law should also be passed to force the banks to lend more money to people to build affordable middle class houses/flats for other people to buy or rent instead of the banking lending money to inflate(inflation) existing house prices. Buying a lot more affordable houses/flats would create a lot more jobs as well. High house prices are just sign of inflation i.e. too many people chasing too few houses.

What is the alternative to these job cuts?
Pray tell.

1.The Fat cats at the top take pay cuts. This money used to save jobs at the company.

2.The South African government drop all income tax and put VAT up between 3%-10% on all goods and services the middle class and rich buy, this will result in more money being spend in the actual economy which will create jobs.

Unfortunately more job losses are coming as many small businesses are close to failure and the consumer is very stretched -largely due to colossal increases in rates, electricity and taxes-in turn largely due to theft and incompetent staff employment everywhere-so will cut back on domestic workers and allied services( pool cleaning, home maintenance, luxury goods and services etc)

Persistent mismanagement comes home to roost and projected economic growth below population growth simply means that the average person is worse off- a better life for all-not under the incompetent and corrupt leadership of the criminal clique in the ANC-no way!

You know!… I am speaking like an old lady drawing water from a river down under in the rural village of Phohloza, the 10th province of Mzansi.
The village and the province have the same name “Phohloza”.

She asks…”I hear everywhere they talk of unemployment, unemployment… Eintlik,whose business is it that people are employed of nie werk het nie?…Hayi mina angazi stru…

THIS IS A FUNDAMENTAL QUESTION THAT NO SOUTH AFRICAN LEADER; BUSINESS, SOCIAL OR POLITICAL CAN ANSWER… how do we start to solve a problem that is nobodys’ PROBLEM.

There are other companies that isnt on this list: Mittal +- 1200 jobs and what about the 4 major banks who also indicated huge jobs cuts. Then in the mining industry I believe are another few thousand job losses soon!

Cut 40-50% of all staff all you create is more money for the looters or you’ll be making more room for more looters to come into the party… Cutting jobs is never a solution… Its too easy.