Junk rating this week may be least of SA’s problems Business and apartment buildings at sunset of the Pretoria CBD. Image: Waldo Swiegers/Bloomberg

As South Africa heads into a three-week lockdown that will shut down large parts of its shrinking economy, a possible downgrade of its credit rating to “junk” on Friday could be the least of its problems.

Moody’s Investors Service is scheduled to make an announcement at the end of the week and while it could end up taking no action, 19 of 23 economists surveyed by Bloomberg expect a negative ratings move. According to 12 respondents, the country will be cut to junk, while seven expect it to be placed on ratings watch for a downgrade, two expect it to be affirmed at current levels and two expect no statement.

Pessimism has been growing since Moody’s in November cut the outlook on South African credit to negative and the February budget failed to show a debt-stabilization path. The economy has slumped into its second recession in two years, a problem exacerbated by the coronavirus pandemic, which causes the Covid-19 respiratory disorder that has so far killed more than 17,000 people worldwide. 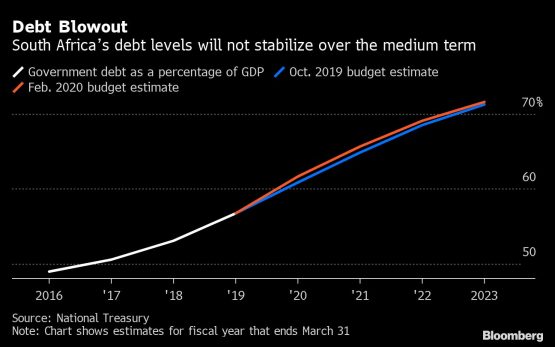 “The Covid-19 has certainly added to the underlying economic pressures,” said Thabi Leoka, an independent economist in Johannesburg. “Debt seems to increase in perpetuity. This is a problem.”

On Monday night, President Cyril Ramaphosa announced a lockdown that will go into effect at midnight on March 26, halting all activity except essential services. The restrictions are likely to weaken tax collections, increasing the burden on already-strained public finances. Government estimates in February showed the budget deficit as a percentage of GDP would widen to an almost three-decade high in the 12 months through March 2021.

That, and the government’s debt burden, could now look even worse. The Treasury will have to reconsider its fiscal framework, Director-General Dondo Mogajane told the South African Broadcasting Corp. on Tuesday. On the growth side, the picture is hardly any better. Moody’s almost halved its forecast for 2020’s expansion to 0.4% on March 6, when South Africa had just one confirmed infection. As of Wednesday morning it had 709 cases, with Gauteng province, the country’s economic hub, the hardest hit. 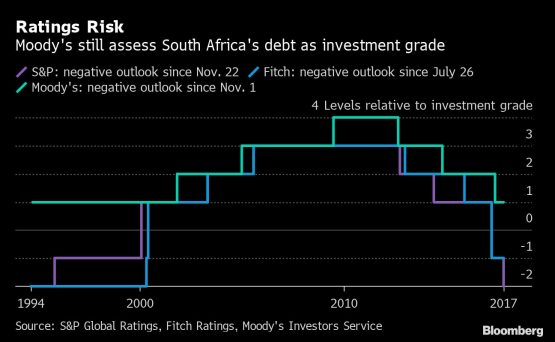 But while a downgrade by Moody’s would leave South Africa without an investment-grade rating for the first time in 25 years and cause it to be dropped from the FTSE World Government Bond Index, the negative impact on the rand may be muted. That’s because virus-driven fears have already resulted in significant outflows, driving the currency 14% lower against the dollar in the past month.

Given that backdrop, the reality of a long-feared downgrade could even come as a “relief,” said Mike Schussler, chief economist at Economists.co.za. Free from worries about a downgrade, South African monetary and fiscal policy decision makers could take decisive action at a time when “rules have been dumped to help keep economies alive” globally.

South African bonds soared on Wednesday after the central bank said it will start buying debt in the secondary market in an unprecedented intervention to boost liquidity.

Lumkile Mondi, an economics lecturer at the University of the Witwatersrand in Johannesburg, is the only respondent in the Bloomberg survey who expects the country will still have its investment-grade rating at Moody’s at the end of 2020.

“South Africa has been saved by Covid-19, which requires massive investment by the state to save lives,” Mondi said. “Covenants and other financial measurements have become secondary.”

“President Cyril Ramaphosa’s swift and decisive handling of the crisis will probably stay Moody’s hand for now until the extent of damage to the economy is fully understood.”

Perhaps Moody’s should go into lockdown for a while?

“South Africa has been saved by Covid-19, which requires massive investment by the state to save lives,”

It means we have a capable state and a capable president who is handling the crisis effectively. The world is handling out cheap money and may recover swiftly.
They have a responsibility as well and they can’t destroy a country as well.

SA is well capable of getting out of this mess and the mess Zuma created. We just need the time and space to do it! South Africans are more united now than for a very long time.

Chop Your Dollar 4 months ago

Dadape:. This isn’t a Zuma created mess, it’s an ANC created mess. And as far as I can tell, the ANC are still around.

Looks like an irrelevancy – the rest of the world needs cash to fund their own recovery so lending money to SA will be far from the top of international investors’ to do list. I’d guess any EM sovereign issues would have to carry a huge coupon to be attractive even to niche funds in an environment where cash ($) is king.

SA’s debt burden will ONLY really become a serious problem (i.e. when defaults begin to start) once after most of SA’s R4trn retirement funds have been depleted, thanks to prescribed assets.

Thereafter money-printing / hyper-inflation will start. SO SA will be “OK” for the next decade or two…until complete blowout.

(Ever wonder why the old NP/Apartheid govt went to the negotiating table in the late 80’s? It was not because the SADF was defeated militarily, myths around Cuito Cuanavale included,…the NP govt simply ran out of money to fund it).

Here we have a govt that (also) spends more it receives in tax collections. But NO sanctions. The taps of international money are available. Why? The cost of AA/BEE to govt (being an artificial system going against economic sense) is BIGGER than a protracted war.