‘South Africa is very unequal and did not become more equal after the end of apartheid’.
By Rene Vollgraaff, Bloomberg 1 Oct 2015  18:07 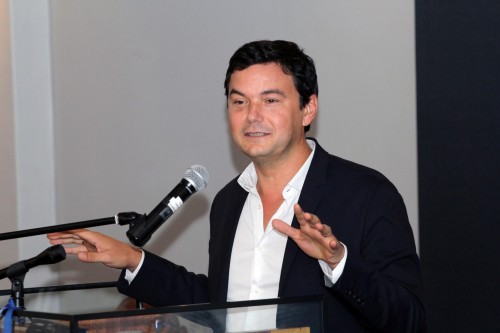 Thomas Piketty, the French economist specialising in wealth and inequality, said a lack of large- scale, forced land redistribution in South Africa from the rich to the poor has fuelled one of the world’s widest income gaps.

“Many successful development experiences in Europe and also in Asia did at some point in their trajectory use land reform and other forms of direct redistribution of property much more than South Africa did,” Piketty said in an interview on Thursday in Johannesburg. “You never had this kind of big phase of redistribution of property and probably that explains why the legacy of apartheid is still very much there in terms of inequality.”

More than two decades after the end of white minority rule, racial inequality is still stark in South Africa. Black South Africans, who make up about 80% of the population of 55 million, on average earn a sixth of what white citizens do, according to census data. Since coming to power in 1994, the ruling African National Congress has sought to redistribute wealth to blacks by imposing rules that require industries from mining to technology to sell stakes in companies to black investors. The ANC’s land reform policy is based on a willing seller-willing buyer model.

“South Africa is very unequal and did not become more equal after the end of apartheid, at least not as much as some people would have hoped,” Piketty said. “In some way, it has even become more unequal if we take the concentration of incomes in the top groups of the people.”

Labour unions have been calling for a national minimum wage and Deputy President Cyril Ramaphosa said last month implementing this plan is a matter of urgency. Such a pay floor, and a tax on the wealth of individuals rather than just their income, would contribute toward a more equal society inSouth Africa, Piketty told reporters in Johannesburg.

A national minimum wage “is an important tool to reduce extreme wage inequality,” Piketty said. “Creating an annual wealth tax with a low tax rate will be a way to create more transparency about who owns what in South Africa and how this is changing over time.”

South Africa raised income taxes for the first time in 20 years in the February budget, targeting all except the lowest income earners, to help plug a revenue shortfall. The Organisation for Economic Co-operation and Development said in July the government should increase taxes on wealthier individuals to help boost income needed to expand social and economic infrastructure.

Piketty is in South Africa to deliver the annual Nelson Mandela lecture on Oct. 3. He is author of the best-selling book, Capital in the Twenty-First Century, which investigates the concentration of wealth.

so whats new? – this is exactly what people have been saying since 1994. the EFF says exactly this and everyone heaps scorn on them.

He does know what he’s talking about. Its only logic that when you transfer land from more productive units to less productive units the economy will suffer. I.e. Zimbabwe, 90 % of land reform project in SA fails. Given those facts, this man thinks more land reform is going to improve inequality? He is simply on a different planet. Maybe he’s famous because his views fits the liberal media. One thing is for sure , if the SA continue with this land reform policy and the country fails , Mr Pikety is not going to be held accountable.

Equality is a noble cause, but I think providing for yourself or your family should be addressed first.

If he is so clever, please tell me when agriculture only contributes 3% to GDP, how is it going to close the income gap on a large scale to redistribute land? Moreover more than 80% of land reform claims are settled in cash – people don’t want to farm anymore. Secondly his assertion that “black South Africans, earn on average a sixth of what white citizens do”, needs analysis. According to Mike Schüssler an economist , the median age of whites in the latest census is 38 years compared with 33 years in 1996. Black people’s median age is still 21 years. All population groups grew older, except black people. This fact makes a big difference because the longer you work, the more you earn. Typically, you would at least have received a promotion or two if you’re 38 years old – something you’re probably not entitled to at age 21. Based on the age difference, one would expect the typical 38-year-old to earn about 50% to 100% more than the typical 21-year-old. Perhaps the Professor needs to consider this.

The man is a ne- Marxist fool peddling theories that Stalin, Mao and Pol Pot proved unworkable decades ago. Pikkety rocketed to fame claiming to have a startling revelation: capital compounds at a faster rate than wages hence the wealth gap between owners of the means of production and proletariat will continue to grow. The world’s reaction, not unlike that of Paul on the way to Damascus, enthusiastically embraced Pikkety’s folly and the “solution” ongoing state sponsored plunder of those who produce wealth. As usual poverty is not the issue but inequality. Yawn.

This is, of course, nothing new under the sun despite the world’s apparent startlement . In fact if there was even an argument for widespread share ownership, Pikkety’s is it.

Peter Schiff’s brilliant rebuttal is legendary and well worth the read:

It is after all the politics of envy at its best.

Thanks for the link. It says it all. We need Peter Schiff to talk some sense into the envious and lazy locals.

“lack of large- scale, forced land redistribution in South Africa from the rich to the poor has fuelled one of the world’s widest income gaps.”

Hmmm … any mention ANC cadres who have streaked into the ranks of dollar billionaires in a few years?

The prof should climb down from his ivory tower and see what matters are really like on the ground . I stay on a small farm in rural Gauteng and I am on pension . We get electricity from Eskom which costs us R6.00 a kW/hr not 85 cents a kW/hr. I pay land tax on a valuation that is nearly three times the market value of my property. Please note we get no services what so ever .I have lodged objections but got no reply . The political parties are not interested in fixing up the mess farm evaluations are . I am sure that when land distribution takes place municipal evaluations will be ignored . The question is will recipients of land distribution be able to pay these charges

The years during which inequality rose according to Piketty, are the periods of higher inflation. The effect of inflation is to enrich some at the expense of the majority. People with assets (property, shares, gold) become wealthy relative to those without it.

This leaves us with the only logical conclusion- The same socialist government that finance public projects through deficit spending, is responsible for the wealth gap created by the ensuing inflation.

“Lenin is said to have declared that the best way to destroy the Capitalist System was to debauch the currency. By a continuing process of inflation, governments can confiscate, secretly and unobserved, an important part of the wealth of their citizens. By this method they not only confiscate, but they confiscate arbitrarily; and, while the process impoverishes many, it actually enriches some. The sight of this arbitrary rearrangement of riches strikes not only at security, but at confidence in the equity of the existing distribution of wealth.” – Keynes

To be expected. He is a Keynesian. Nothing wrong with deficit spending on economically productive infrastructure. The danger is in recurrent deficit consumption spending. Any re-distribution of wealth must maintain or enhance productive capacity, if not, we go the same way as Zimbabwe.
Has he been invited to speak in Angola?