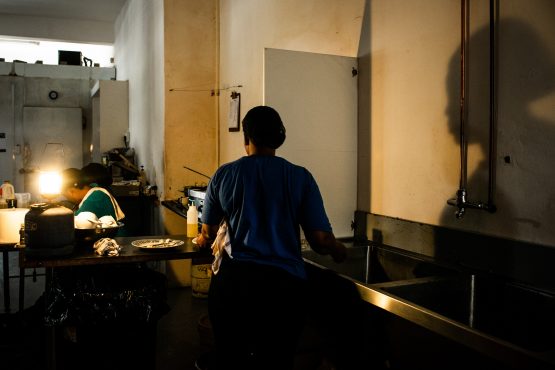 Workers in a cafe use an emergency gas-powered lamp to illuminate the kitchen after a load-shedding power outage stopped their electricity supply in Joburg. Picture: Waldo Swiegers/Bloomberg

“It appears unlikely that the imports from Mozambique will be restored in the next few days,” Eskom said in a statement. The utility planned to build up water reserves for additional power to help the grid avoid further cuts during the week.

Stage 4 power cuts, the highest level that has been implemented by the utility, reflects the unreliability of aging coal stations, a reliance on imports and defects in even the newest plants built. That level of electricity rationing will be implemented from 8 a.m. to 11 p.m. on Sunday, according to Eskom.

The fourth straight day of rotational power cuts, known as load-shedding, is intended to protect the system from a total collapse.

Eskom is seen as one of the biggest risks to the country’s economy, burdened by operational and financial woes stemming from years of mismanagement and massive cost overruns on two new coal-fired power stations that should have been completed in 2015.

People are asking how can the ANC remain in power, especially with these rolling blackouts!?? I think the answer is actually simple; its because the majority of those that vote for the ANC, especially in the rural areas, never had electricity, prior to 1994. Also, many of their supporters are actually not even paying for it anyway!??
In most other democratic countries, the ruling party would be voted out of power, due to state capture, looting, corruption, etc….but not in SA!??

The Mozambican cyclone is viewed as a godsend by the brains trust at Eskom, who have been running low on excuses why 60 000 employees cannot produce a spark.

Next on the list was: “One of our employees accidentally sneezed into the controls at Medupi, resulting in Stage 5 loadshedding.”

Followed by a pre-prepared statement by the presidency: “An inter-ministerial task team has been set up to investigate the causes of hay fever.”

The Mozambique power supply is approx. 800MW. So that’s stage 1 at best. Doesn’t explain the other 3000MW?

Since 1912 the ANC demanded the opportunity to govern the country. They inherited Eskom with 37GW capacity and ran it down to 21GW. I don’t think the NP was wrong to be sceptical about their capacity to govern since most countries in Africa is just an Eskom story as well. I am sick and tired of being politically correct. This is not working and everybody knows it!

I agree. Why be PC when the ANC says effu on a daily basis to the country and its citizens. Sadly they are also making the NP look like a bunch of geniuses. They live in such a delusional world they see running stuff into the ground as success.

OK so a cyclone is an excuse

I agree with the other comments the cyclone sterilizing 900MW does not provide the answer to satisfy stage 4 loadshedding. Is this the dribble the government is feeding the masses? It must be an election year…