Early projections by the South African Reserve Bank (Sarb) are that the 21-day lockdown, aimed at curbing the spread of the coronavirus, could see around 370 000 job losses and 1 600 businesses being declared insolvent in the country.

That’s the word from Dr Christopher Loewald, a member of the Sarb’s Monetary Policy Committee (MPC), who was speaking during the bank’s bi-annual Monetary Policy Review briefing on Monday. 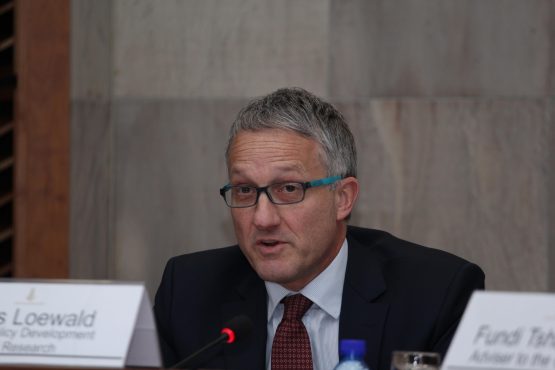 Presenting via a live video broadcast, Loewald said the “growth shock” that the bank anticipates coming from the 21-day shutdown could result in a 2.6% contraction in real GDP “from a purely supply side”. The briefing included Reserve Bank Governor Lesetja Kganyago and other members of the MPC.

“These numbers are very uncertain and move around a lot … The outcome also depends on how long the shutdown lasts and then on the rate of pick up [by the various sectors] after the shutdown,” Loewald said.

“Part of the difficulty with a crisis like this [the global Covid-19 pandemic] is that it’s not just the supply, but also demand-side shocks,” he noted.

“We are also trying to estimate what kind of demand shocks we might get, and two variables here are job losses and business failures. For the formal sector, the shock that we see as a possibility is something like 370 000 jobs lost and we’re looking at something like 1 600 businesses that could [be declared] insolvent in 2020. These are big numbers,” he said. Loewald, however, cautioned that these were “very early numbers” in terms of the Sarb’s forecasting process.

At the start of the briefing, Kganyago also warned that uncertainty around Covid-19 has made forecasting “nightmarish” for the Sarb.

“The Covid-19 pandemic is the biggest disruption to the global economy since the bankruptcy of Lehman Brothers in 2008,” the bank noted in its latest Monetary Policy Review, published to coincide with the briefing on Monday.

The bank, however, added that it has “space to respond” given that inflation is projected to remain under 4.5% this year and is likely to stay within the target range over the medium term.

At its last MPC meeting in March, the Sarb slashed its repo rate by 1%, bringing interest rates to a six-year low.

“Monetary stimulus can help mitigate the economic costs of the Covid-19 shock, by supporting the spending power of firms and households,” the Sarb also pointed out in its Monetary Policy Review.

“South Africa, however, suffers from significant, pre-existing growth constraints. Better long-term growth prospects will therefore require a range of interventions, many of them outside the domain of the central bank,” it added.

The review noted that the Covid-19 outbreak severely reduced output in the first quarter of the year and that the disruption is set to intensify in the second quarter. “After that, the outlook is uncertain, but most analysts expect a rebound which will push up growth by 2021, although more adverse scenarios are conceivable,” it said.

The Sarb now estimates that the economy will contract by around 2% to 4% in 2020, however, it cautioned these projections were “tentative”. At its last MPC meeting on March 19, the bank said it expected the South African economy to contract by 0.2% this year, however, this was before President Cyril Ramaphosa announced the three-week lockdown.

If South Africa’s recession accelerates into a contraction of more than 2% for 2020, it will represent the country’s worse economic contraction since the advent of democracy in 1994. The global financial crisis in 2008/2009 saw South Africa’s GDP shrink by 1.5% and resulted in around 900 000 job losses.

Cutting interest rates wont have much effect. If you cant pay your bond at all what does a few hundred rand difference help?

All this will do is ensure pensioners also end up on the heap of desperation. The one difference being there is not much they can do about it like look for another job etc.

Soon many pensioners wont be able to pay for their own care. WHAT THEN?

A simple and clear solution to insolvencies?

It does not make sense to have a lockdown that prevents people from working but then insist that debt and obligations carry on.

Why not for two months suspend or halt all debt and obligations across the board – that means no salaries, rent, rates and taxes, debit orders and account payments, across the whole economy.

In other words, freeze the economy – to prevent many businesses go under, with the resultant loss of capital and jobs.

Suspend salaries for 2 months? Have you been smoking your socks?
That means no food for 2 months as well.

This lock down is crippling the country/economy to save a few lives. TB, AIDS etc. have been taking much more lives daily than the lock down will save.

If loans originated from a bag of money in someone’s basement, then this idea of a payment freeze might work. That loan originated from a salary earner who needs his money to pay his bills and to buy food, the pensioner who made a deposit and depends on the interest to buy food and medicine and the working capital of the farmer who can’t freeze the seasons to stop planting and harvesting. A payment freeze implies that people must also take a nutrition freeze, they must stop eating.

The financial system was not designed for a freeze. A payment freeze is tantamount to default or breach of a contractual agreement. Under normal circumstances, the system can accommodate individual cases of loan restructuring, but if the entire economic system lacks liquidity then it becomes the Reserve Bank’s problem. The Reserve Bank is the lender of last resort to save the banking system during times like this. The Reserve Bank has only one tool in its toolbox, and that is the devaluation of the currency. That means that every person who uses the currency pays for the “freeze” with the loss of purchasing power of their salaries and pensions.

This is why lockdown is never a good idea. The ultimate cost of the government’s reaction to the virus will be much worse than the effect of the virus itself. There is no choice to be made between the economy and lives. Lives depend on the economy. The health of the economy determines the size of the population.

Sensei, it’s a well put argument that one. But I don’t think we want to test the effect of this virus without a lockdown. If we are impacted badly like or worse than Italy it could wipe out more active members of this economy than the other side. Then the real effect is full pandemonium in the country. Almost the entire world is depressed right now, so I don’t foresee people withdrawing their money just to hoard it or even emigrate to any country unless they are certain they are won’t be welcomed with this virus in a foreign land.

I appreciate your point of view. We have had a “run on the banks” already. That is why the Reserve Bank had to step in to buy bonds. They had to create liquidity. The exchange rate blew out by 30%. That implies that at the bare minimum, every citizen will be paying for lockdown with 30% of his income for the rest of his life. What is the present value of 30% of your salary for the rest of your life? That is the cost of lockdown for you personally.

Can you afford it, my brother?

Sensei, the exchange rate is further compounded by the country’s downgrade and the realization that the global outlook this year is a net negative, which doesn’t bode down well for a net importer like us. The pain from this virus is global. But I do take your concerns. I guess the options we have right now all have side-effects. Which side-effect is better? I wish I knew.

CUT THE PRIME RATE 3% OR MORE.

i agree Hachmet, why not cut it to 0% and see what happens. if Debt is not a problem the Fed can print $350T and give every american a $million check – problem solved and we do the same here. The incompetent ANC SHOULD focus on FISCAL policies instead – only problem is that takes a bit more skill to implement than just reducing a rate every now and then and hoping for the best.

Fixed deposits have beaten the Jse for the last 7 years running, those people who were wise enough to be be in cash have made money which is taxable.
Foreigners are net disinvestors from thee Jse because of it’s dismal performance but have investing in fixed income here .
South African companies are holding onto billions in cash
THEY WILL NOT INVEST IN SA BECAUSE OF BAD GOVERNANCE

More job losses, more crime.if this crap lockdown is extended, what effect will that have on your school/college/university year?

I have neglected to say (above) that the poor get say R1 000 a month for the two months.

Note to the Editors

Can you please send Mike Schussler’s email address to my email address – I want to get feedback from him on my suggestion on how businesses and individuals might be saved from liquidation and sequestration.

But do you remember any effect your lives or on our hospitals?
No, and its because it was poor people who were affected…