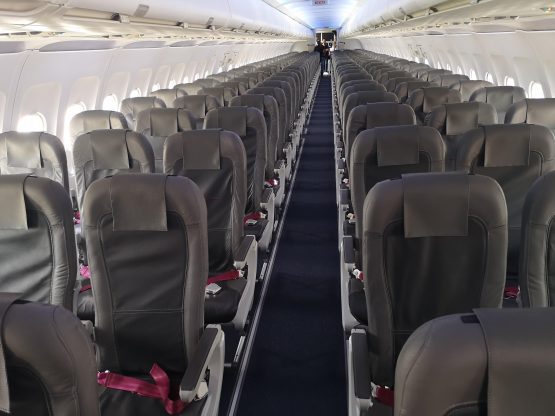 The three operating low-cost airlines in the country – FlySafair, Kulula and Lift – have all launched ‘business class’ or premium offerings in an effort to compete against SAA.

FlySafair introduced Business Class in August last year as a replacement for its Premium fare. Beyond the two checked bag and 32kg special equipment allowance, it included priority bag as well as a blocked middle seat between passengers. This blocked seat can be added on any of its other fare classes (Lite or Standard) at a cost of R750. This is the difference between its Standard and Business Class fares, meaning the special equipment allowance, priority bag, included seat reservation and unlimited fee-free changes are effectively bundled for ‘free’.

Kulula overhauled its fare structure last week ahead of it resuming operations on Wednesday. Previously it had a standard fare, a semi-flex fare and a full-flex option. It now offers three options: Fly Light, Pack & Go and Fully Loaded. This repackaging of its fares has achieved two things: it can compete more effectively with FlySafair at the low-end where a traveller does not require a checked in bag and, more importantly, it effectively raises the price of its standard fares by R195. Kulula bundles two free flight changes into this ‘Pack & Go’ option where customers will pay only the fare difference. This is its answer to rival Lift’s flexible fare policy. Kulula’s highest tier fare is not strictly comparable to a premium or business class offering, as it includes two checked bags, Q-jump and free unlimited flight changes (with the fare difference payable). There is no blocked off middle seat. Kulula cannot realistically compete in the business class space as its sister-airline, BA, plays in that segment.

This week, Lift unveiled its business class offering, Lift Premium which offers what it claims is “industry-leading legroom”‚ unlimited flight changes as well as priority customer support. The fare bundles two checked bags as well as a sports equipment allowance. Flights can be changed or cancelled up to one hour before departure without any penalties. In these Premium zones onboard its Airbus A320s, the middle seat has been converted into an additional tray table. Flights offering Premium seating start on October 11.

The space to watch

The real competition will be on the Johannesburg-Cape Town route, which remains one of the busiest domestic routes in the world. As the economy continues to open up following the peak of the Covid-19 third wave, travel will continue to increase. Following SAA’s grounding, the only domestic business class experience (particularly when it comes to the amount of space) is on British Airways.

It is therefore no surprise that the low-cost carriers have decided to compete in this segment, as operating margins on these seats are far higher than on others.

These seats are sometimes also the last available on flights meaning that airlines are able to get travellers to pay a multiple more than they ordinarily would (also at a higher margin).

Moneyweb compared fare prices on flights between Johannesburg (OR Tambo International) and Cape Town International Airport for a random Monday in October.

* Cheapest flight departing from the respective airport between 6am and 8am.

** Not a true business class offering as the Fully Loaded fare only includes a single seat (no blocked-off seat).

You can do your own low-cost airline fare comparisons here: FlySafair, Kulula and Lift Premium.

Because of what could only be suspected limited demand, SAA’s pricing is not that dynamic (yet). At this stage, BA’s economy class and business class fares compare very favourably against the flag-carrier.

Interestingly, Lift Premium is very aggressively priced against business class fares for the full-service carriers, at around 30% cheaper. FlySafair, with an experience with arguably fewer bells-and-whistles, is around half the price of BA’s business class.

Once travel picks up from these fairly-depressed levels, it will be interesting to see just how aggressively the low-cost and full-service carriers (presuming SAA actually restarts?) compete for those travellers willing to pay more for a premium experience.

It will be interesting to see if there is still some goodwill left regarding the SAA brand.

Don’t count on me or any of my family and friends!

But you can be certain that all government staff and politicians will be forced by some cabinet policy to use ONLY SAA to avoid sitting with empty planes.

I have to agree with you here….and how impressed I have been with Flysafair’s competent and innovative service during the pandemic. They’re going to be hard to beat in this regard.

My concerns with SAA relate to Operations more than “brand”.

Always found them an absolute pleasure on the intra-africa routes.

How good is the Ops though after all the cash problems and mismanagement?

Why doesn’t Lift announce passenger numbers thus far since it’s first takeoff almost a year ago? And how many dogs (lapdogs) have they transported – is there a market for it? Quite fascinating!

Louise: I expect all the lapdogs to be flying to/from parliament – via SAA :-p

Of course! Those ones with the poodle hairdos and national flag-coloured ribbons in their tails! And briefcases…

No one has to compete with SAA they will self destruct again. The definition of madness is doing the same thing over and over and expecting a different result.

Kulua are nothing more than a dishonest bunch of liars. My wife and I booked and paid for our seats and paid the extra to book our seat numbers. We checked in hours before and were allocated our bought seats with a the corresponding boarding passes. When we arrived at the gate they took our boarding passes and reallocated us to the back of the plane in separate rows. When I questioned them they threatened to throw me off the plane and concocted a story that they had to reconfigure the aircraft. When we boarded there were two 20 odd year old’s sitting in our seats. Clearly these were 2 snot nosed executives kids and the secretary had messed up booking their seats. Took us 4 weeks to get refunded on the seat booking cost. I instructed my company to never use them again they did not give a damn with losing R130 odd thousand a year in business. We moved to Mango and as true as bob on the first Cape Town flight they did exactly the same at least this time we were refunded at the airport. Our business only uses FlySafair now and they have nothing to fear from SAA.

Disappointing to hear about Kulula. Mango is also SA government-owned and bankrolled by SA taxpayers, so in reality your company has dormant shares in it.

My experience with Flysafair has always been positive, so not surprised you’re also happy. Besides one has the peace of mind of Flysafair not being dependent for aircraft maintenance on government-owned SAA technical (SAAT) ; superbly experienced technicians can’t do much without cash with which to operate the business and receiving monthly salaries to do so!
Enjoy your flights!

Oh no! I also do my own online straight forward bookings and the Safair website always works like a dream. This is disappointing news – you’re not perhaps Pravin Gordhan’s twin brother posting fake news, are you?

More and more our customers are opting for MS Teams meetings instead of physical visits. It’s a brave new world with benefits to the environment and the bottom line!

In war or in peace, pandemic or not, there’s no substitute for boots on the ground.

Kulula is off my list due to their attitude for paid flights cancelled during the 2 month no fly decision. We will refund your money within 6-8 weeks. That’s not on. Besides for the usual delays, cancelled flight changes etc. etc. Unreliable for business.

Had a weird experience with Airlink. Booked to fly to George and back in December 2020 from Kimberley.They changed the flight schedule to George in such a way that I would have missed my meeting. No change to the flight back. After a long fight they agreed to refund me (within 6 months) for the flight TO George. The flight BACK I had to take within 6 months. Not at least a credit to be used on any flight within a time period. And no changing to or from a different destination also, had to fly from George to Kimberley, even though I live in Kimberley. Had to lose the money. The breathtaking idiocy still infuriates me.

Am just glad the competition is opening up. Can just be good for consumers. Has anyone noticed the insane FlySafair pricing when they the skies all to themselves? Call it what you will – demand and supply whatever – but the pricing was way arrogant and abusive:R7000 return between Durban and Johannesburg? Aaaah!

Disagree that too many players in a limited market (such as currently exists in SA’s aviation market mainly due to Covid, and even worldwide also due to Covid) is “good for customers!
The aviation sector is different to for example the local banking sector that for decades seriously milked customers because it lacked enough players (banks) to provide enough competition to put pressure on bank costs whereby customers benefitted.
Aviation is the exact opposite now since Covid wiped out very large chunks of flying business people locally and abroad – the fear for customers now is that too many operators might not be able to make enough money, running at losses or managing to even break even, and therefore start skimping on vitally important stuff like maintenance and training of pilots – as has happened with SAA and eventually Mango as well.