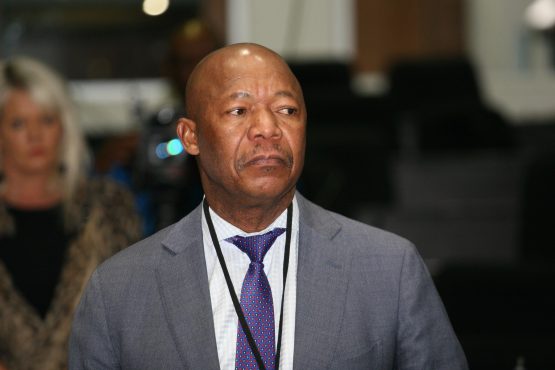 'I am very upset that I have been reported to a law enforcement agency on a trumped-up charge,' said Matjila. Image: Moneyweb

Former Public Investment Corporation (PIC) CEO Dan Matjila has distanced himself from businessman Kholofelo Maponya, who has been using the weight of Matjila’s office to try an extract irregular payments of close to R100 billion in transaction origination fees.

The issue, which has now been referred to the Hawks, started shortly after the PIC concluded a transaction to acquire a stake in mortgage company SA Home Loans with Maponya’s Bolatja Hlogo Consortium, a subsidiary of Matome Maponya Investments (MMI) in 2014.

The PIC had bought a 25% stake in the company and wholly funded Maponya’s 25% when JP Morgan went out to seek a buyer for its 50% shareholding in SA Home Loans. The remaining 50% is held by Standard Bank.

Matjila told the Mpati commission of inquiry on Wednesday that the role of Maponya’s consortium was to work with SA Home Loans as its BEE partner, “in driving transformation and most importantly to provide solutions for end-user finance for Government Employee Pension Fund [GEPF] members”.

Read: ‘Invisible hands’ at the PIC

The GEPF is the custodian of R1.8 trillion in pension money for over 1.7 million active and retired state workers that is managed by the state asset manager.

Shortly after the transaction, the PIC extended a R9 billion credit facility to SA Home Loans for low-cost home loans for GEPF members.

Maponya allegedly told SA Home Loans CEO Kevin Penwarden that he and Matjila had agreed that MMI was entitled to R45 million in fees based on the 1% transaction origination fees that were supposed to be shared equally between the PIC and MMI. He allegedly informed the PIC’s head of risk, Roy Rajdhar, of the agreement.

On Wednesday, Matjila denied having agreed to this arrangement.

“I categorically deny that I had discussed or agreed on an origination fee with anyone or payable to any person,” Matjila told the commission.

Matjila said all this time, he believed that there was a contractual agreement between Maponya and SA Home Loans. This is why, when his assistant Wellington Masekesa (who was also the PIC’s representative on the SA Home Loans board) informed him that the company was willing to pay Maponya, he was not opposed to the suggestion.

But SA Home Loans did not have the money to make such a payment. Matjila said he sought legal advice on how to resolve the payment issue – and this is how he came to sign a letter where the PIC cedes its right to the R45 million payment to Maponya. SA Home Loans would repay the PIC at a later stage.

“Mr Maponya had become a serious thorn in the flesh of the PIC, and me personally, in his misinformed but aggressive attempts to get paid,” Matjila told the commission. He said Maponya would send him threatening text messages and calls demanding the money.

So when he received advice to temporarily cede the rights to the transaction fees from his legal team, he said he thought it was legitimate and would solve the “painful Maponya problem”.

But it wasn’t legitimate.

Which is why Standard Bank CEO Sim Tshabalala had to step in to stop the payment. In a meeting with Matjila, the bank said it would oppose the letter because it would be “wrong” for SA Home Loans to pay Maponya for practically doing nothing or very little.

Matjila said he immediately withdrew the cession letter as this was the first time he realised that Maponya did not have an arrangement with SA Home Loans as he previously believed.

Despite all of this Maponya forged ahead, this time he allegedly tried to use the second application by SA Home Loans for a R10 billion facility to get his money.

Maponya and Masekesa invited SA Home Loans director Zakheni Dlamini to a meeting at a restaurant in Sandton, where they told him that the company’s loan application was being delayed because they had not paid Maponya the R45 million from the initial transaction.

According to Dlamini, who previously testified before the commission, the pair suggested that SA Home Loans “regularise” the payment by adding it to the transaction fees of the new application, with an additional R50 million bringing Maponya’s payment to R95 million.

“[Maponya] said that Dr Matjila had indicated that if [SA Home Loans] could find a way of regularising these payments to MMI – he said Dr Matjila would support such payments,” testified Dlamini.

Instead of drawing up a proposal to “regularise” the fees, the company reported the matter to its auditors and the Hawks.

Matjila categorically denied the allegations that he had agreed with Maponya and Masekesa to make a R95 million payment to Maponya, saying the seriousness of the allegations should have led to SA Home Loans asking him about it, which never happened.

He added that the loan was not delayed because of any failure to pay Maponya but because unions had raised issues about using a service provider to provide loans to GEPF members. This matter had been before the Standing Committee of Finance, he said.

“I am very upset that I have been reported to a law enforcement agency on a trumped-up charge,” said Matjila.

Deny deny deny – there was no collusion! If it works for the President of the United States why not for other political appointees!
Politics in BRICS countries is the new word for Robbery Fraud and Corruption.

“…using the weight of Matjila’s office to try an extract irregular payments of close to R100 billion in transaction origination fees.”

Let me write that in capitals: CLOSE TO ONE HUNDRED BILLION RANDS for finding a bank that will lend you funds?

Millions and millions being paid to some dubious characters who act as third parties? So where does the money go? Mercedeses, fashions, bling, parties etc etc.

Is it any wonder that the economy has collapsed?

Totally gutless.
If politicians come asking for favours just tell them FO.
Heavy people pressurised him?
I repeat: totally gutless. ( Or maybe he is just scrambling for justification?)