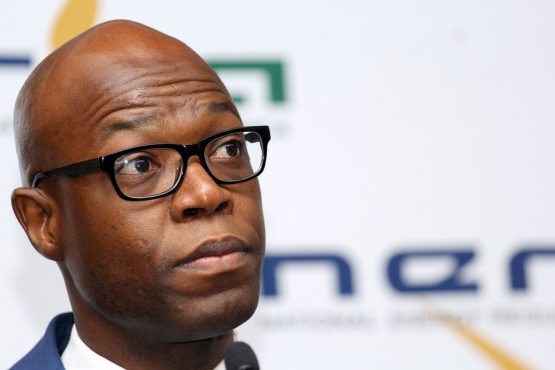 Matshela Koko was reinstated by the board of Eskom to his role as acting CEO, on Friday morning.

Previously the head of generation at the state utility, he was suspended and subject to an internal probe relating to the company’s dealings with his step-daughters’ company, Impulse International, that was awarded at least R1 billion in contracts from Eskom.

Koko was also central to approving the loan of some R650 million made by Eskom to the Gupta-owned Tegeta Resources, which enabled the purchase of the Optimum Coal mine in April of last year.

The board found him not guilty on all charges and he was reinstated by Public Enterprises Minister Lynne Brown at a board meeting held at the company’s headquarters in Johannesburg.

I knew this was coming after the sham of a hearing.

Disgraceful really after the 1bn contract and other clear corruption.

Brown needs to be removed followed by the ANC.

Justice is served, ….and it is so sweat.

And How is that sweet justice pray tell??

No, he said sweat justice. Smells like armpits, or worse.

Unbelievable – yes in any sane society a very apt comment. This is not a sane society. Hence believable! Definitely a last chance to milk the cow and or attempt to ‘clean the decks’ of evidence, etc, etc before the ‘State of Capture’ recommendations become a reality. The Board and Brown remain complicit even as events unfold – foolish is as foolish does. These folk need to suffer more than a mere whiplash side-effect. Let’s hope post this weekend that real action can be taken.

Suicide.The debt holders and lenders will be closing the tills.

What is this country coming too .. in a few weeks he is out again !!
Is this a perpetual circus?? and where is the parliamentary committee on this ??

If there’s any justice in this world, then I suppose, Markus Jooste also hasn’t done anything wrong.

Well, at least Markus isn’t claiming it was early retirement. (But I guess his pension fund was well diversified).

Zume proved Abraham Lincoln wrong. In the ANC you can “fool all of the people all of the time”.

Dancing back to work,Molefe style.yep,the funders are going to withdraw support like yesterday and that should be the end of Koko the clown.and yes,Jooste is biting his fingernails the whole of SA comes after him

No really, I cannot bring myself to contribute to this mess. 2018 off the grid we go ……

I am with you on this one, Smartie. Our 3kW system is going to be uprgraded to 6kW ASAP. All our appliances are green. Solar on the roof and solar hot water too. This is a fool’s game and I don’t speak stupid. Off the grid we go. And if you are looking for a reliable system try, Energy Partners ….. 100% professional. Very happy with our system.

How can Brown actually re-instate someone that blatantly LIES on National TV about a corrupt payment to a corrupt outfit run by corrupt Injuns in co-horts with a corrupt Prezziedente……..
Shocking – at least Jooste and his idjuts will be losing their OWN money – and not just the taxpayers money.