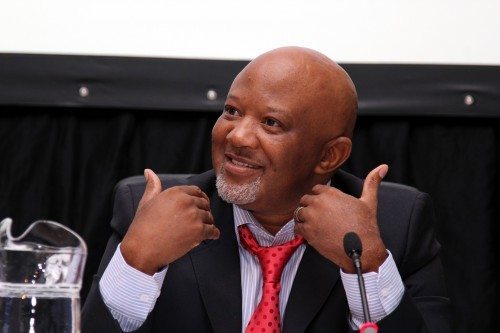 This was confirmed on Thursday in a statement by the Office of the ANC Chief Whip.

Thursday’s ANC Chief Whip statement said: “Comrade Jonas has served both as Deputy Minister and MP with absolute distinction and dedication. He has also served the movement and the South African people in various capacities over the years. On behalf of the ANC in Parliament we thank comrade Jonas for his selfless service to the movement as its public representative.

“We are confident that he will continue serving the country and our movement in other capacities in future. We wish him well.”

In the AHI Indaba in Centurion on Wednesday, Jonas said “we all expected to be fired”. Watch ‘Five questions with Jonas’ here:

He also spoke about Treasury’s vulnerability in another video clip. Watch here.

Later on Thursday, Parliament also confirmed the resignation of former energy minister Tina Joemat-Pettersson as an MP, effective March 31. She is the third MP to resign this week. Former transport minister Dipuo Peters resigned on Wednesday.

So why was Tina Joemat-Pettersson fired? Look at the effect on the nrenewable industry and connect the dots . . . https://t.co/JdQmuLJPd3

The response on Twitter to Jonas’s resignation was mixed.

Jonas – who has now resigned as ANC MP – was the guy who – per statecapture report – said he'd refused a R600 million bribe from the Guptas.

Its so sad to hear about the resignation of Mcebisi Jonas. That man had integrity. Salute!!

And Mcebisi Jonas has resigned as an ANC MP. One less vote against Zuma in the no confidence motion. BUT…can't blame him. @Radio702

Everyone railing against Mr Jonas for resigning ahead of no-confidence vote. Knowing who's really in charge, what would YOU do in his shoes?

So that's what they mean by voting with their conscience? Jonas resigns as MP. Voting with his feet? #CabinetReshuffle.

Mara if Mcebisi Jonas and others resign, won't they just be replaced with Zuma figureheads? This #voteofnoconfidence won't pass

Why didn’t he wait until the vote of no confidence? At least go out with a bang

Exactly my sentiments. No back bone either I guess.

I don’t get it. Same with Peters. Rather vote on the motion, get fired, and be guatanteed not only a legacy in South Africa but probably also many public sector job offers!

Maybe I am missing something

I think I get it. It’s due to them retaining their benefits of being an MP as at end of previous month rather than being fired by the ANC and losing those benefits. Can anybody in the know, enlighten us?

Maybe it’s a question of being too principled to vote against the motion, but too loyal to the party to vote in favour or even abstain?

This does not make sense – with all the talk, the willingness to go public on the ‘bride’, etc, etc. The loyalty issue has been a dead duck for ages. I think it is reasonable to expect people to take a stand based on what they say. As much as I admire Jonas, this is a huge disappointment.

The best way (most believable way) right now for any ANC person to take a stand will be voting against CLUELESS (783) in a vote of no confidence and to make sure that people see that you are doing so. Otherwise all else is mere posturing – like top ‘top 6’.

I don’t get it. They have all already been fired. They may just as well have waited for after the 18th April and cast their vote to sack Gupta.

Clearly they have hidden agendas – the spineless jellyfish. The lot of them.

Their hidden agendas is they would lose too much finacially if they stay on, vote against the ruling party and then get subsequently kicked out

Losing competent and trustworthy people in strategic positions is a very sad chapter in this country’s already troubled history.