Meulriver diesel spill one of the biggest contaminations yet Diesel from Transnet's multi-product fuel pipeline seen flowing into a river near Heidelberg in Gauteng, following a theft incident on Wednesday. Image: Supplied

Criminal activity at Transnet’s multi-product pipeline between Durban and Heidelberg in the early hours of Wednesday morning resulted in a “massive” diesel spill into the environment, making it one of the biggest spills yet in terms of the extent of the contamination caused, Transnet says.

“We haven’t determined the quantum yet, but it is one of our biggest spills with regards to the river being contaminated and the extent of the impact of the contamination,” Transnet spokesperson Saret Knoetze tells Moneyweb.

A statement issued by Transnet Pipelines CEO Michelle Phillips on Wednesday says the security tactical team deployed to investigate the fuel theft found that the spillage was a result of tampering with a block valve chamber.

Transnet says it was able to restart the pipeline late on Wednesday afternoon.

Cost of the damage

Transnet says it is currently unable to quantify exactly the amount of diesel that was lost, its rand value or the associated costs of the damage.

“It’s far too early to determine the cost associated with the environmental clean-up and the rehabilitation of the contaminated area,” says Knoetze.

According to Transnet, the diesel has contaminated surrounding farmland – which is normally used for grazing – and the local Meulriver. 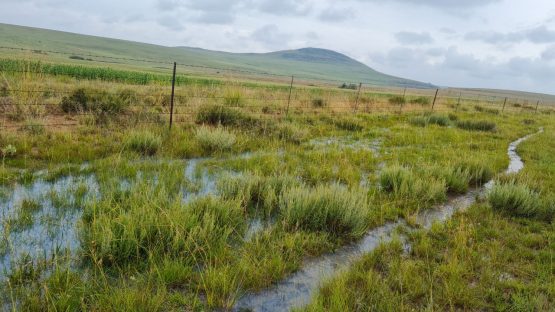 The spillage of diesel was as a result of fuel theft activity. Image: Supplied

“The focus at the moment is for containment and after containment, [will be] the recovering of free-phase product. We can then determine how big an area is contaminated and full rehabilitation planning will then develop,” says Knoetze.

She says the river will be Transnet’s priority for at least the next week. “Sometimes the product … gets stuck to the plants on the side of the river so our priority is to clean the river and make sure that there’s no contamination downstream.”

Transnet says it is liaising with farmers in the surrounding communities regarding the extent of the damage.

Although sizeable, Transnet says the spillage will not result in supply shortage for Gauteng fuel users – who are the main market for the diesel pipeline – as reserves remain sufficient.

“So, at this stage there is no concerns of security of supply.”

Transnet says in the past year various security interventions to curb fuel theft have yielded positive results, with the entity seeing a 50% reduction in the number of such incidents compared with the previous year.

An investigation of this latest incident is underway and Transnet has called on the full might of the law to be brought down on the perpetrators.

“We appeal to all strategic role-players in the industry, including petroleum retailers and members of the public to refrain from buying fuel from unregistered traders,” says Phillips.

Hmmm, note that Transnet says “unable to quantify”. Not true methinks, these pipelines are well metered (although maybe it is an Eskom type bungle) but I have heard numbers from a player in the industry and they are frightening. Millions of litres.