Former PIC CEO said to have signed off on an investment worth billions before the transaction was presented to the PIC.
By Tebogo Tshwane 21 May 2019  00:21 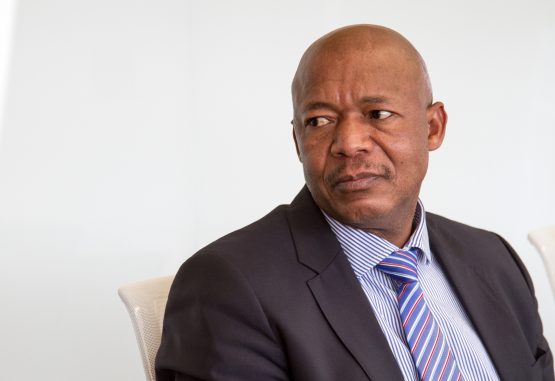 Dodgy dealing. A senior market risk analyst at the PIC says Iqbal Survé attempted to bring an impaired investment to the state-owned asset manager, and corroborated what others have said about then CEO Dan Matjila (pictured) signing off on the deal. Photographer: Dean Hutton/Bloomberg

Former chief executive of the Public Investment Corporation (PIC) Dan Matjila signed his approval for the investment of R3 billion in Iqbal Survé’s Sagarmatha Technologies prior to the deal going through the PIC’s investment committees.

Survé’s Sekunjalo Investment Holdings had approached the PIC to participate in its listing of Sagarmatha on the Johannesburg Stock Exchange. The company was hoping to raise between R3 billion and R7.5 billion at R39.62 per share.

The PIC was expected to subscribe to R3 billion of these shares while the rest would come from other investors.

Read: R2.1 billion in pension funds at heart of scandal

On Monday, during his submission to the judicial commission probing issues of governance and impropriety at the state-owned asset manager, senior market risk analyst Tshifhango Ndadza confirmed that Matjila had signed the deal on December 13, 2017.

It appears from the timeline of the documents presented to the commission by Ndadza that the deal had not been through any of the appraisal structures of the PIC prior to Matjila signing it.

The portfolio monitoring committee for listed investments only got sight of the deal in January 2018, while the investment committee, which is the senior approval committee before the board, only considered it in April 2018.

“The way it had been presented, it would have been a foregone conclusion,” said Ndadza.

The deal was nonetheless still taken through the PIC’s structures for evaluation, with the PIC’s deal team arriving at a different valuation than that signed by Matjila. The deal team recommended that the PIC invest only R800 million into Sagarmatha, at R7.06 per share or below.

It was the PIC’s investment committee that eventually resolved that management should follow the delegation of authority and decide if it wanted to invest the entire R3 billion and to safeguard the investment with downside protection of at least 12 months.

Ndadza said that to the best of his knowledge the committee was making the decision without the knowledge that Matjila had already signed an agreement.

“We only learned later that there was a signed agreement. It was never presented at the meeting,” he said.

Ndadza mentioned that his testimony was to give his side of the story but also to corroborate the evidence that was brought to the commission by assistant portfolio manager Victor Seanie.

Seanie’s submission blew the lid off Matjila’s role in signing off another multi-billion-rand investment into another of Survé’s companies, Ayo Technologies, without following PIC processes as well as shedding light on the reluctance shown by PIC analysts to take on the Sagarmatha deal.

In his testimony, Seanie said he believed that the Sagarmatha investment belonged at the bottom end of the valuation range which was R4.39 per share, “if not less”.

“To be frank it is literally an impaired investment,” said Ndadza.

He said Sagarmatha was practically insolvent when it approached the PIC for funding and that the company would not have been successful if it had listed on the JSE.

At the heart of this was the fact that the company would have used a “significant chunk “of the PIC’s investment to consolidate Survé’s Independent Media into Sagarmatha. The media company had liabilities that exceeded its assets by about R500-R600 million.

The R3 billion capital raised was intended to buy out the PIC’s loans and equity claims in Independent Media for R1.5 billion, almost double what it owed. In addition, said Ndadza, Sargamatha would buy Sekunjalo’s stake in the media company to the tune of R1 billion.

“When you sum up all those transactions they would have come up to R2.5 billion, and that leaves R500 million from the capital raised,” said Ndadza.

Sagarmatha’s growth strategy involved making acquisitions and developing businesses that were within the company. Ndadza said the R500 million would not have been sufficient for these plans.

The deal never materialised due to the JSE withdrawing the company’s listing after it failed to provide its financial statements within the bourse’s deadlines.

Reminds me of the infamous Supra!!!!
Cut from the same cloth…..

Fraud on a grand scale.

This is call Cadre deployment,where senior Executive with no experience and principle are deployed to loot the resources of hard working pensioner.These people are put into senior decision making position,by people who emabrk on patronage and self greed.IT reminds me odf Animal Farm,where one fight for equal right but when one come into power,then they become the corruptors

Animal farm is a perfect description of our political mess.

Thank goodness the JSE camrto it’s senses just in time. Another useless fraudulent listing on the exchange would have possibly collapsed the last bit of economic credibility SA has.
Robbing the PIC was the start of ideas to nationalized SARB, so the looting could continue….Thank goodness it was nippedin the bud.

To be precise the JSE was embarrassed into its senses by the media. It found a technicality at the last minute for what was essentially a done deal.

So Mr Matjila approved a deal of over a billion rands on “good will”? Any company director in the Western First World would have been in jail by now, but hey! this is South Africa where the rules of the universe don’t exist!

We are in a little corrupt, dirty, failed world all of our own.