The Nedbank Group CEO details how the commercial bank was pressured to reopen bank accounts of Gupta-linked entities.
By Ray Mahlaka 19 Sep 2018  13:40 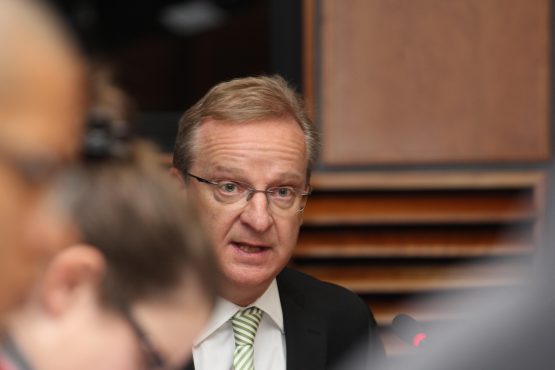 Nedbank Group CEO Mike Brown has detailed how the commercial bank was strong-armed with “veiled threats” by former mineral resources minister Mosebenzi Zwane to reverse its decision to close Gupta-linked bank accounts in 2016.

Brown, who testified at the State Capture Commission of Inquiry on Wednesday, said Zwane suggested at an Inter-Ministerial Committee (IMC) meeting on May 6, 2016, that Nedbank should “step in” and “become a primary transaction bank for the Gupta-family”.

After the conclusion of the IMC meeting — which was unusually held in Zwane’s office (such meetings are usually reserved for Parliament) — Zwane reminded Brown that commercial banks in SA received their banking licence from the government.

“I found it to be a strange statement. It felt like a threat as the subtext [of Zwane’s statement] was ‘be careful, things could happen to your licence if you don’t do things in a particular way’,” said Brown.

“I certainly felt the numerous references in the meeting to the licencing regime [by Zwane] was pressure that was being placed on the bank.”

Zwane, a known lackey to the Gupta family, was the chairperson of the IMC, which was set up by members of former president Jacob Zuma’s cabinet after the big four banks — Nedbank, Absa, Standard Bank, and FNB — pulled the plug on the family’s accounts over suspicious and money laundering transactions.

“I left the IMC meeting with the impression that a good outcome for the IMC was for Nedbank to save the Gupta family, which Nedbank was not prepared to do.”

In his attempt to convince Nedbank to reopen the accounts, Zwane told Brown that the closure of the accounts would result in “16 000 job losses” as the Gupta-entities would not have banking facilities and that some controversial family members had stepped down from the entities. Between April 7 and May 7, Nedbank shut the accounts of Gupta-owned entities including Oakbay Investments, Confident Concepts, Sahara Computers, and VR Laser Services — which were all central to the state capture project. Brown said the entities posed reputational and business risk to Nedbank and, after careful consideration, the bank exercised its contractual right to terminate the bank accounts.

Brown’s testimony mirrors that of Ian Sinton, Standard Bank’s former head of legal compliance, who told the inquiry on Monday that Zwane also threatened to take away the bank’s licence if it didn’t reverse its decision to close Gupta-entity bank accounts.

Brown said the IMC meeting made him uncomfortable, as its members wanted to discuss reasons for Nedbank shutting Gupta-entity accounts. He refused to talk about “client-bank relationship” as it was illegal but was prepared to speak generally about legislation and regulations governing operations of banks.

“Nedbank independently closed the bank accounts and didn’t consult or collude with other banks.”

Any ‘veiled threat’ is hostile and a bully trend.

The ANC tried to bully Nedbank on Gupta account closures.

The irony in the banks being this bastion of integrity in this filthy saga is deafening.

so glad the Banks didn’t bent to these Zwines fancy!

I dont know why but this latest set of revelations have made a bigger impact on me than a lot of the others. It think it just the sheer lunacy of letting people of limited ability and knowledge, who have no morals lose to “summon” respected business leaders l;ike they are naughty schoolchildren that gets to me. It is also clear that the ANC as a whole, with the possible exception of Treasury was complicit in this farce.

How many other meetings were held where firms were summoned top give a tender to Y or a job to X’s son that we will never know about? Yes, it happens all over the world and yes it happened in the past in South Africa, but not to this extent

What I find quite disheartening, is that these people you rightfully refer to as people of limited ability and knowledge, are the very best the ANC has to offer. These utterly incompetent and ignorant “representatives of the people” allow themselves to be used as stooges or pawns in the hands of looters of foreign origin. They are willing to compromise the very foundation of our economy in order to win favour with looters who despise them.

These people were appointed by the majority, who put their best people forward. My question is this – when these people were the best the ANC had to offer, who will come to take their place? And further, what does it say about the voting majority who appointed them?

It seems that the much maligned KPMG were the first to ditch the Guptas and the banks and others followed suit.

It would be interesting to hear what these auditors would have to say?

“The issue is freedom versus dictatorship. It is only after men have chosen slavery and dictatorship that they can begin the usual gang warfare of socialized countries—today, it is called pressure-group warfare—over whose gang will rule, who will enslave whom, whose property will be plundered for whose benefit, who will be sacrificed to whose “noble” purpose.”
― Ayn Rand, Capitalism: The Unknown Ideal