New tariff methodology available for comment at end of April.
By Moneyweb 4 Apr 2022  00:01 The regulator hopes to finalise the tariff determinations by June 15 for implementation on July 1. Image: Shutterstock

In a discussion document published on its website, energy regulator Nersa is proposing an average increase of 7.47% in municipal electricity tariffs from July 1.

For the coming financial year, it proposes the continued use of the historic method of tariff setting by providing a guideline to municipalities of the percentage increase to be implemented compared to existing tariffs, as well as tariff benchmarks for different costumer categories.

Moneyweb earlier reported that Nersa is facing two legal challenges to this methodology.

An application by a number of intensive users in Madibeng to set aside Nersa’s approval of the municipality’s industrial tariffs for the past several years was postponed indefinitely in the High Court in Pretoria on March 24 after the court heard argument on some technical points.

In another matter the business chambers of Nelson Mandela Bay and Pietermaritzburg are challenging Nersa’s decision last year to use the same methodology to set municipal tariffs.

Both challenges are largely based on the contention that Nersa is failing to base such tariffs on the efficient cost plus a reasonable margin, as required by law.

Nersa is opposing both applications.

During a recent meeting of Nersa’s electricity sub-committee Nomfundo Maseti, one of the most experienced regulator members, conceded that this practice falls short in terms of the law. 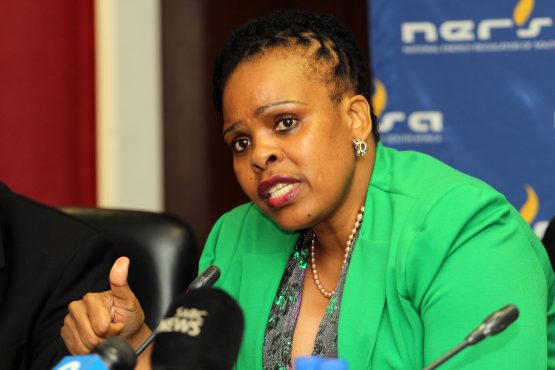 Nomfundo Maseti, one of the members of Nersa’s electricity sub-committee. Image: Moneyweb

She took Nersa officials to task for failing to develop timeframes to move to compliance.

In a carefully worded sentence, the discussion document concedes that the current guideline and benchmark methodology “does not explicitly show the relationship between the licensee’s cost structures and its tariffs”.

It explains that Nersa would have preferred to use what it calls activity-based costing and marginal costing. This would be an extension of the new tariff methodology it wanted to use for the determination of Eskom’s tariffs for the current financial year.

Eskom however obtained a court order on the basis that the methodology was not yet ready and got a reprieve for one year.

In line with the court ruling, Nersa says it cannot use this methodology yet. It also needs data from municipalities to go this route and is therefore developing such data templates for future use.

This, Nersa states, is part of a fully-fledged methodology that will be ready by the end of April, when it will be published for comment.

Nersa also deals with the possible use of Eskom’s retail tariffs as a benchmark for municipalities. This is in line with a proposal the regulator made two years ago, saying then that it may use Eskom’s cost where municipalities failed to submit cost-of-supply studies.

At the time this was welcomed by some business chambers, but Nersa eventually reverted to the guideline and benchmark methodology.

It now says Eskom’s tariffs are indicative of only Eskom’s cost and are therefore not an appropriate benchmark for municipalities.

Nersa states that municipalities failed to submit compliant cost-of-supply studies despite efforts by Nersa and other institutions to assist them in this regard.

The regulator hopes to receive more compliant studies in the coming financial year and says it will implement a drive towards proper cost-of-supply data in parallel with the guideline and benchmark methodology.

It emphasises that the planned adoption of a new methodology in the next financial year will not do away with the need for proper cost-of-supply studies.

Maseti during the sub-committee meeting also questioned why municipalities are allowed up to 12% electricity losses when the benchmark is 10%.

The chair of the meeting, full-time regulator member for electricity Nhlanhla Gumede, questioned the failure of municipalities to collect outstanding revenue and insisted that consumers should not pay for poor collections rates.

According to the performance indicators collection rates as low as 85% are however acceptable.

Nersa then calculates the guideline as follows:

It further asks for comment on tariffs it has developed for small-scale embedded generators, mostly rooftop solar photovoltaic, using the proposed guideline increase and Eskom’s Megaflex tariff minus 20%.

Stakeholders are requested to submit written comment by April 22 and Nersa hopes to finalise the guideline and benchmarks by May 11. Due to time pressure, there will be no public hearings on the matter.

Thereafter municipalities must submit their tariff applications. Those applications that exceed the guideline will be submitted to a public hearing on June 8 and Nersa hopes to finalise all municipal tariff determinations by June 15 for implementation on July 1.

These central-planning public administrators are truly living in a fool’s paradise. They go about their daily little central-planning lives, oblivious to the deteriorating economic circumstances, the decreasing spending power, and the rising debt levels around them.

These myopic and ignorant central planners, who enjoy a comfortable monoply on administered costs, have the ability to increase their own income streams by the mere stroke of a pen.

They never look out the window to see the overindebtedness of the citizenry who are supposed to fund their highly unsustainable strategy.

Luthuli House is a central-planning parasitic monster, with SOE tentacles that reach into every home and business and sucks the lifeblood out of the economy to sustain the political elite. This parasite consumes economic activity and excretes joblessness.

There are many tariffs that are abusive that developed to their current price levels over the past decade. Allowing those tariffs this albeit lower increase merely perpetuates the abuse. My effective cost is over 360c/kWh. Eskom total revenue total TWh works out to 136c AFTER the next Eskom increase. How do we get from 136 to 360??

It also makes no sense that there are across just the top few metros dozens of tariff schemes across residential, commercial and industrial. The tariff rules and elements should be able to be standardised to say a dozen at the most. Then the job of checking and regulating tariffs would be vastly simpler as outliers can easily be spotted. Consumers can then also spot why their industrial 500 kVA connection is R4000 fixed plus R330/peak kVA plus 107c/kWh but a comparable council has R2000 + R260 + 102c.

Part of that 136 Eskom problem being so low is special deals : there must be users paying Eskom far less than 100c for the total average being 136.. As the owners of Eskom we have the right to know who the lowest twenty Eskom consumers are. I am tired of De Ruyter proclaiming their 136c is one of the lowest in the world. That is not the lived experience of business in SA! If private company X benefits from a very low tariff, the DTI budget must pay Eskom that subsidy, all of us should not be subsidizing X.

One of the first rules of looting is to obfuctuate the system such that no comparisons can be made.