Over the last decade electricity prices in SA have increased by 175% – with large electricity users 'prejudiced' by the current tariff system. Image: Supplied

A discussion paper published by energy regulator Nersa on Heritage Day, September 24, calls for a complete overhaul of the ways Eskom’s tariffs are set.

It proposes a move away from the current revenue-based approach to determine electricity tariffs in South Africa to a cost-to-serve approach that might benefit large power users who have been subsidising residential customers for years.

Stakeholders have until October 29 to submit written comments, after which Nersa will hold public hearings via Microsoft Teams. The regulator hopes to finalise the new methodology by mid-November.

It is expected to decide next week whether to reject Eskom’s tariff application for the next three financial years, which was submitted early in June. This application has been drafted in terms of the rules for the current tariff period, referred to as Multi Year Tariff Determination 4 (MYPD4).

If Nersa approves this proposal from its own electricity sub-committee (ELS) to send Eskom back to the drawing board in terms of the new rules, it will have to devise an interim measure for determining at least the 2022/23 tariffs, since it takes Eskom about a year to draft a tariff application.

The matter was discussed by the ELS behind closed doors last week.

Eskom’s tariffs for 2022/23 have to be finalised by March 15, when the utility must table the tariffs in parliament. The tariffs take effect on April 1 for Eskom’s direct customers and municipalities increase their tariffs for end-users on July 1.

Ideally Eskom’s new tariffs should be known by December for municipalities to incorporate them in their budgets, which are implemented on July 1.

If Nersa fails to approve Eskom’s tariffs in time, it will not be able to legally recover any revenue.

Over the last decade electricity prices have increased by 175%, outstripping the consumer price index (CPI). 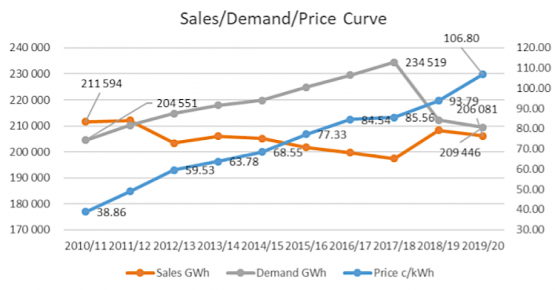 Nersa therefore argues that an appropriate new methodology must be developed to ensure price stability.

The current methodology puts the regulator in an impossible situation where it determines Eskom’s revenue and tariffs based on its cost and sales, while Nersa has no control over sales.

When the expected sales are not realised, Eskom under-recovers its promised revenue. This then has to be recovered at a later stage through the Regulatory Clearing Account (RCA), which results in a different price path than anticipated.

The current system is further based on lumping costs together to determine Eskom’s total revenue and average price.

“Because the individual retail tariff[s] that are then derived from the averaged costs bear no resemblance to the actual costs incurred by the utility to deliver a service to individual customer groupings, this has in fact prejudiced customers, especially industrial and manufacturing customers by making them pay for costs they do not contribute to.”

Average pricing does not send the right pricing signals to different users regarding the cost their consumption imposes on Eskom, Nersa argues.

“The enemy in the current electricity pricing approach is the ‘averaging’, which results in inefficiencies, cross subsidies and socialisation of costs, which is central in revenue determination.”

According to Nersa the idea is that the provider of each service – for example, each power station – will, based on its cost, apply for its own tariff, which will include some profit.

These individual tariffs will be ringfenced, and under an independent market and system operator, this marginal pricing will ensure efficiency and the appropriate order or deployment of different generation units.

The discussion paper also points to other key determinants of the new methodology, namely the separation of trading from distribution, allowing bilateral contracting and the requirement that different services be priced and contracted separately.

The regulator poses 11 sets of questions for stakeholders to comment on.

The discussion document can be downloaded here.

I am afraid that I don’t see any light at the end of the tunnel with this. Each power station have it’s own cost?

Nersa and Eskom are going to battle to survive once the Eskom hold on distribution is broken.
If we are allowed to wheel power at a reasonable rate Eskom is dead !!!

NERSA needs to:
– force compliance on payments on the municipalities,
– have a debt recovery plan,
– have a plan to stop electricity theft,
– make prepaid electricity cheaper,
– disallow dual suppliers in municipalities (eg Joburg)
– allow feed in tarrifs,
– incentivise self generation.

What is right and correct and good for the nation is clearly not the long term agenda of the political class. Once the bum is in the people sponsored butter then it is all about keeping it there.

As a sales director for decades, in America every time we changed the pay plan the employee got screwed.What are the trickle down effects???

nersa and eskom – just mentioning the idea of ringfencing whilst eskom is suppose to act as one unit in the country with one product to sell means one thing – from bad to worse – a thumb sucked idea will still not solve eskom’s core problem – far too many over paid cadre employees, irresponsible foreign loans, non paying municipalities, tapped / hot wired soweto’s in the whole sa and not even capable of generating enough electricity too keep the industry up and running – mark this: Christmas is coming – we want our 13th cheque or suddenly load shedding is back in full force

If we are going to clean house:

1. Wipe out the absurdly priced deals certain large users enjoyed, including eports.
2. Capitalize Eskom rationally. Are we trying to recover R450b debt and debt service cost when that structure is not real? Transfer the excess debt to government, it is pointless making up silly electricity tariffs.
3. Remove policy pricing to government, so all those levies and subsidies get charged to the relevant government department, not all the users.
4. Work prices out at benchmarked labor levels. Eskom will shed 10,000 jobs quickly when they do not get tariffs for those 10,000 political jobs.

Most importantly , don’t just look at Eskom, look at the council markup. It is insane that electricity now costs me 320c/kWh. Two increases and I can run on diesel. Outcomes matter. Despite half my diesel cost being RAF and Road taxes, I could run my little factory on diesel cheaper than Eskom and council can run massive coal nuclear plants. THAT IS BEYOND ABSURD

Get a fuel tanker. go and fill up in Lesotho, swaziland or botswana — Diesel much cheaper there !!!

This is wat happens when bureaucratic governments think they can do what private enterprise is best at.
Eskom must be privatised to allow new entrants to facilitate competition amongst utilities to bring costs down.
High energy prices is stifling economic growth,increasing inflation which is a huge contributor of maintaining a subsistence society.

NERSA are just as useless and corrupt like Eskom! Incompetent people!

What ever way you look at it the consumer will pay for past ANC/ESCOM corruption and theft.
There are many consumers that I know (specifically in Cape Town) that have been deprived of a daily hot shower now constrained to 2 to 3 times a week. Where will that end up… a dirty unhealthy nation?

Not easy enough to steal or jack up the price, they need to make it much more Eshom user-friendly.

Eskom’s failure to collect all that is owning cannot be condoned. After all, when it suits it, the ANC preaches “user pays”.

If executive pay was tied to collections, there would be different results.

Sadly Eskom is in a slow death spiral, as most people will be generating 50 to 80 percent of their own power. Eventually municipalities will be generating power and it will only be the hot connections and large industries powered via Eskom.

More tariff increases for the consumer. Privatise – get some competition in there. Our household elecricity tariffs must be approaching the highest in the world at this stage – especially after municipalities have added their markup.

I applaud Eskom for the great job they have done since 1994. They inherited a broken system where there were hours of blackouts in the townships or in many cases no electricity for the previously disadvantaged communities of SA. Whilst the white areas were spared loadshedding.

They have done the impossible and are now providing electricity to EVERYONE. Well done Eskom.

Take the current total bill of the consumer, slash it by 40% as this is the average waste that the consumer is sponsoring.
Then work back to the input costs per kWh and structure the company around that.
The proposals on the table will just sponsor inefficiency and waste.

Eskom must be the biggest driver of inflation in this country. Cadre deployment/corruption and incompetence are behind this. It’s simply to expensive to do business in SA. The milk cow is being butchered alive.