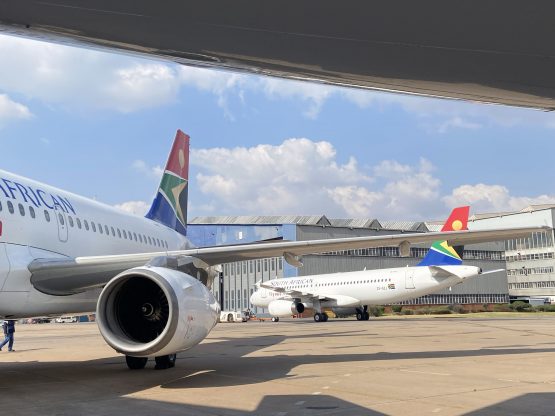 Because there was no functioning council, SAA was allowed to resume flights without scrutiny. Image: Moneyweb

Transport Minister Fikile Mbalula’s failure to appoint two crucial air licensing councils, allegedly to benefit South African Airways (SAA), may come back to bite the very same SAA as it seeks regulatory approval for the sale of 51% of its shares to the Takatso consortium.

Very little is known about the content of the sale agreement and stakeholders are now taking steps to ensure proper disclosure.

Government announced at the end of February that the deal with Takatso had been signed pending regulatory approval.

Most commentators took this as a reference to the Competition Commission – but the deal also requires the green light from the domestic and international air licensing councils, according to transport economist Joachim Vermooten.

Its Domestic Air Licensing Council has oversight over compliance with the 25% foreign shareholding limit and the sustainability of the business plans of local commercial airlines. It must also, among other things, ensure that the airlines have sufficient provision to secure the deposits of flight tickets sold in advance, proper insurance, and the required safety and technical approvals from the Civil Aviation Authority.

The terms of office of these councils expired in March last year and Mbalula has failed to appoint new office bearers since then.

In November last year he published the names of 16 prospective candidates for comment, but almost four months later has still not made any appointments.

This has led to a vacuum.

Aviation consultant Rennie van Zyl, who has specialised knowledge of the regulatory environment, believes Mbalula’s failure to appoint the councils was a deliberate move to avoid scrutiny of SAA after it came out of business rescue in April last year. The airline resumed flying in September after 15 months on the ground.

Read:
SAA takes to the skies after being grounded for 544 days
Why was Takatso not yet on board when SAA took to the skies?

Vermooten agrees and points out that the domestic council should interrogate airlines that are not utilising their rights, with a view to cancelling them on the use-it-or-lose-it principle. One would have expected the council to challenge SAA in this regard and at least put the spotlight on its business plan when considering the continued allocation of these rights to the state-owned airline.

Because there was no functioning council, SAA was allowed to resume flights without scrutiny.

The absence of these councils is detrimental to the entire local aviation industry, which is still recovering from the Covid-19 restrictions.

This is especially the case where the unutilised rights of state-owned airlines like SA Express, SAA and Mango are not made available to competitors and the same competitors cannot get approval for new regional routes.

Van Zyl says he will not be surprised if Mbalula now proceeds with the appointment of the councils, to assist in finalising the Takatso deal.

It has however been years since SAA published financial statements and this may pose a challenge in getting the green light from the councils, he says.

In the meantime stakeholders are getting impatient about the secrecy surrounding the Takatso deal.

The National Union of Metalworkers (Numsa) and the South African Cabin Crew Association (Sacca) say they have not been consulted about the deal at all and have no information about what it entails.

The unions have now embarked on arbitration with the employer to get proper disclosure.

Democratic Alliance member of the Standing Committee on Public Accounts (Scopa) Alf Lees has called for the transaction to be disclosed to parliament so it can fulfill its oversight function.

What exactly is being sold?

Vermooten says it is still unclear what exactly is being sold, for how much, and on what terms. Is it the SAA group with its three subsidiaries (SAA Technical, Mango and Air Chefs) or only SAA as an airline, with the exclusion of the subsidiaries?

Since it is a share deal the sale amount is payable to government, which is currently the sole shareholder. Will any of this unknown amount be invested in SAA?

Vermooten also asks whether there is any fallback clause, should the new partnership fail, and what the suspensive and resolutive clauses are.

Unions have been questioning this as a conflict of interest and criticised government’s stance that it will not give any further assistance to Mango, which is currently in business rescue and hoping to find a buyer.

They are concerned that Mango is being sacrificed in favour of Takatso and Lift.

It is reported that Takatso will contribute R3 billion over three years to the operations of SAA, but little else is known about its obligations in terms of the deal or when it will take control.

Will any of R3 billion be payable to SAA’s creditors who are still collectively owed R3,5 billion, Vermooten asks? This debt was put into receivership when SAA came out of business rescue in April last year and it is not clear how much of it, if any, has since been paid.

SAA is history. It’s done. Another. New. Crisis has discarded it to the rubbish heap of SOE’s. Others will follow. … And no, Russia will not help.

The government is struggling to construct a framework that will siphon pension savings as “investments” into SOEs. People with pension savings are capitalists per definition. Cosatu members are socialist per definition. Government employees are capitalists who believe they are socialists. The ignorance of Cosatu members will enable the government to bail itself out with the savings of its employees.