Since Busisiwe Mkhwebane, 49, took over the office, she’s been accused of bias by the High Court, and almost a third of the reports issued during her tenure are facing legal challenges. The ombudsman’s failing reputation has robbed Zuma’s successor, Cyril Ramaphosa, of a key weapon to fight graft and restore investor confidence in Africa’s most-industrialised economy. Only parliament has the power to remove her.

Read: Public Protector: A year on

Former Public Protector Thuli Madonsela was a constant thorn in Zuma’s side, eventually helping to inject into everyday discourse the term “state capture,” a reference to his relationship with the Guptas, a wealthy family who were his friends and were in business with his son. Zuma and the Guptas have denied wrongdoing.

Since she stepped down in 2016, the ombudsman’s reputation has been in tatters, sparked by a messy battle with the central bank.

“The credibility of the office has plummeted and with it goes the body that has been the stand-out public agency in confronting corruption and maladministration through the years,” David Lewis, executive director of Johannesburg-based transparency group Corruption Watch, said Wednesday. “It’s a bit of a tragedy.”

Her office counters the criticism, saying at least some of it is aimed at undermining her investigations.

“All other Public Protectors have also been criticised heavily by the public, by politicians, and by the courts,” Oupa Segalwe, a spokesman from the Mkhwebane’s office, said in response to emailed questions. “It comes with the territory.”

The nation’s High Court questioned Mkhwebane’s ability to hold office after finding she was biased in a 2017 probe of CIEX consultancy’s report on the central bank’s bailout of Bankorp, which Absa Group bought in 1992. She told Absa to repay R1.125 billion. Mkhwebane didn’t understand “her constitutional duty to be impartial,” the court said, as the it set aside her recommendations.

As a “Chapter Nine” institution, the Public Protector gets a non-renewable seven-year term and can only be removed from office if the National Assembly finds — through a two-thirds majority vote — that she is guilty of misconduct, incapacity or incompetence. Parliament hasn’t agreed to an opposition-party motion to start that process.

“Her conduct has certainly brought the office into disrepute, and the fact that the courts have had to comment on her abilities and understanding of her mandate does raise concern,” said Lawson Naidoo, executive secretary of the Council for the Advancement of the South African Constitution.

Mkhwebane, a lawyer and former analyst at the state security agency, has also been accused of injecting herself into political spats between factions of the ruling African National Congress. Parliament rejected her recommendation that a constitutional amendment be considered to change the central bank’s mandate to focus more on the “socioeconomic well-being of the citizens” rather than protecting the value of the rand.

She has had embarrassing and very public fall-outs with high-profile officials.

Reserve Bank Governor Lesetja Kganyago was scathing in his response to her demand to change the central bank’s mandate, saying she was biased and that her “clearly unlawful conduct exposes her own lack of competency.”

Finance Minister Tito Mboweni described her report on the head of the National Treasury failing to disclose a traffic conviction in his application for the job as “irrational.”

“Instead of having a supportive, robust public protector, we now have one that is erratic at best and apparently is ill-equipped to deal with the demands of the job, but also in certain circumstances seems to be towing a very direct political line,” Corruption Watch’s Lewis said.

We are not surprised, she was was appointed by Zuma.

I can remember a panel recommended her . The interviewing process was broadcast on TV. I know the DA did not approve of her ; whereas the EFF and ANC did.

The ANC have consistently erroded the credibility of every public institution that is there to protect the public and good governance.

Ever since Mkhwebane switched her offices’ TV screens to the Gupta channel the instant she took office, it has been clear what her underlying motives are. She’s not fit to stand in Thuli Madonsela’s shadow. Needs to be kicked out on her backside ASAP.

The ANC has protected this buffoon from investigation in parliament.

Mavuso Msimang, the chairperson of Corruption Watch, endorses the ANC.

we would expect nothing less from a Zuma-appointed cadre.

The good Thuli did for the country and especially for feminism and racial equality, is completely decimated by people of this level of competence. The ANC is ‘spitting into the wind’ (thanks Jim Crouch) by appointing people who are clearly incapable of doing the job. It is as if they are trying their best to prove the case of those who expect woman and people of colour to be inferior. There are many more Thuli’s available. Just appoint them already.

How many of the top six are actually supporting the new direction set by CR? Seems like they are all a bunch of fence sitters at best.

Mkhwebane is a disgrace. This is progress according to the ANC: Replace a competent PP with a useless politically motivated individual who seems to have limited knowledge of the law at best. A great example of why we are on the road to disaster.

Corruption Watch was the body that served SA at the time of her appointment by ensuring the interviews were broadcast on live stream for all to see, and that the public was involved in nominating candidates.
Credit to the DA which was the only party who opposed her appointment. How she broke down one of our most important institutions in next to no time after coming to office – and what a disappointment that it’s a 7-year term!

I had to google your posting. Very interesting. Thanks
https://www.businessballs.com/self-awareness/conscious-competence-learning-model/

the EFF learning from the ANC –

At least we can all agree that the ANC government has been consistent in appointing people with sub-par capabilities into positions they have no idea how to fulfill.

Kudos to them for displaying consistency.

It also gives the voting masses a good indication when viewed in the light of past performance will predict future performance. The majority will get the government they deserve.

the ANC truly is a cANCer – Zuma can say what he likes, his time in office will NOT be remembered fondly. All these commissions of enquiry that cost a fortune but never put anyone behind bars are just a farce. I recall listening to Thuli being interviewed on the radio and always being so impressed with the nobility and dignity she brought with her. Then the ANC downgraded the office to this person whose first publication/finding or whatever the correct term is was to try and advocate for the nationalisation of the SARB. she is NO public protector in any shape or form.

A public protector who doesn’t protect the public. What good is that?

She’s not that cleva, shame man.

She even looks untrustworthy

She represents the cream of the ANC

Mentioning the ANC and the Public Protector in the same sentence….

….brings to mind a (masterpiece of a) song from 80’s band DEPECHE MODE… “Let’s play MASTER and SERVANT”

Perhaps things will change once the Zuptas have been prosecuted? would not be surprised if she is under some threat to perform as she has been! Time will tell.
Madonsela was exceptional – her clear thinking and bravery earns her place amongst the great South African politicians, white and black…. a true patriot. I would vote for her as President any day – no matter what party she represented! 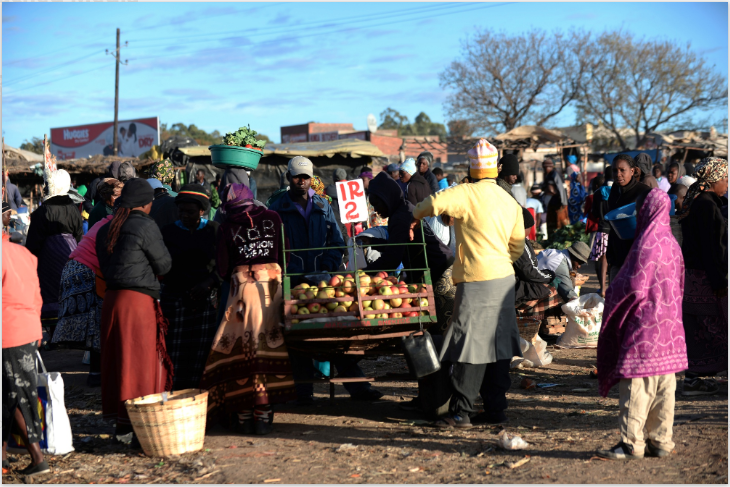