‘It is shameful that ministers and their accounting officers cannot deal with corruption’ – former Scopa chair Themba Godi.
By Barbara Curson 3 Feb 2021  00:01 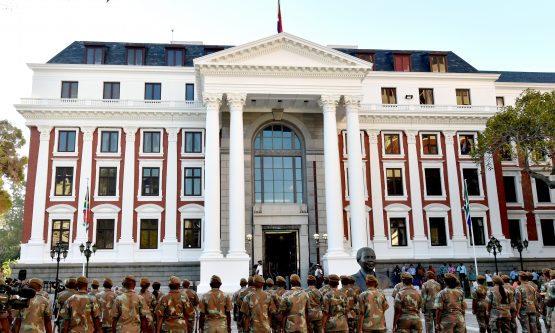 Looks good from the outside, but parliament is dominated by one party and ‘facts do not sway many comrades in portfolio committees’. Image: Kopano Tlape, GCIS

On Monday (February 1), the Zondo Commission of Inquiry into allegations of state capture heard evidence on parliamentary oversight from two former members of the Standing Committee on Public Accounts (Scopa) – Themba Godi and Natasha Mazzone.

Themba Godi is a former chair of Scopa and was a member of parliament on behalf of the African People’s Convention from 2005 to 2019. He explained the functions of Scopa, stating that it considers the financial statements of all government bodies, including state-owned entities (SOEs), any audit reports, any report issued by the attorney-general (AG), and any report on public funds. Scopa can also request information and explanations, and make recommendations.

According to Godi, Scopa is non-factional, works as a team, and acts for the public good.

His opinion is that the extent to which such recommendations are acted upon depends in practice on the integrity and political forces exerted on the members of the Executive (the president, deputy president and cabinet ministers). He said factional battles take place in committee meetings between members of the dominant party.

Godi said the executive did not display a political will to exercise financial control.

Godi said: “We often called for action to be taken against officials … no action was taken; officials resigned and moved to the next department.”

A sense of impunity emboldened the looters.

According to Godi, circumventing the tendering process was the favourite route through which departments avoided regulations.

Godi criticised the role the executive played; that it is not responsive to Scopa’s recommendations.

Godi also pointed a finger at the playground bully:

Godi added that there was no consequence management for officials responsible for non-compliance with applicable legislation.

Mazzone is chief whip of the Democratic Alliance (DA), the official opposition in parliament. She took on the role of chief spokesperson for the DA on alleged state capture from early 2017.

She confirmed that the primary entities that are relevant to the commission are Denel, Transnet, Alexkor, Safcol, South African Airways, South African Express Airways and Eskom, all then falling under the Department of Public Enterprises.

In March 2016 Mazzone attempted to persuade the Portfolio Committee on Public Enterprises (PCPE) to summon the Guptas to answer allegations in the public domain regarding their undue influence over former president Jacob Zuma and government officials.

Mazzone referred to the issues in the public domain including:

Mazzone on numerous occasions made requests, including for a full parliamentary inquiry into the capture of SOEs by the Guptas, and for a full and original unredacted copy of the Denton Report commissioned by Eskom to be made available for ad hoc committee investigations and to the Public Protector Advocate Busisiwe Mkhwebane so she could probe the R30 million pension payment to former Eskom CEO Brian Molefe.

On May 18, 2016, speaking before the National Assembly on the public enterprises budget vote, Mazzone made a formal proposal for a full parliamentary inquiry into the Guptas: “There is mounting evidence to suggest that a number of [SOEs] have been captured by the Gupta family, allegedly influencing not only ministerial appointments but also the appointments of [executives within] SOEs themselves … Parliament is duty bound to hold government accountable as well and to ensure that the cabal of the ANC cronies with links to [former] president [Jacob] Zuma and the Gupta family do not seize our economy.”

Daphne Rantho, chair of the Portfolio Committee on Public Enterprises, had responded to parliament on behalf of the ANC.

Evidence leader Advocate Freund SC, reading from the Hansard parliamentary transcripts, noted that Rantho made no reference to the Guptas, nor to Mazzone’s assertion that parliament should investigate, but to “a turnaround of Eskom, Transnet, SA Express, Denel, Safcor and Alexkor under [former public enterprises] minister [Lynne] Brown, which is bearing fruits …”

At the end of her testimony, Mazzone said the overwhelming majority enjoyed by the ruling party “allows them to outvote, disallow or stop any actions that are contrary to [their] ideology, intentions or political aspirations”.

She concluded: “It is reprehensible that the very individuals discussed and investigated by this committee of inquiry are currently serving as ministers, chairs [of] committees and ordinary members of parliament.”

There are no watchdogs in parliament, just lapdog.

The king is dead. Long live the king.

Thanks Mr Godi for your efforts to try and bring some sort of oversight – unfortunately a little futile as the article above shows.
Through the “collective” of the anc members they are all guilty of failing their electorate and of massive abuse of state funds which could have been utilized to build schools, clinics, provide decent public transport and a variety of other services. Every single anc MP knew what was going on. Every single anc leader at all levels throughout the organisation is guilty of this crime against their own people. All voters who voted for them are guilty by association. You will have to live with your votes as will your decedents for generations to come. You will look upon these dancing clowns and feel ashamed that you sold your souls for a gang of criminals – the anc.

The unfolding tragedy is the consequence of decades of careful planning and all part of a global plan by the real masters of the current regime. It is no secret where their support came from that led to the demise of our once well-run country. (And don’t tell me they were fighting for an egalitarian society). Like the Anglo Boer war was about the resources, not the political plight of the disenfranchised immigrants, this too was about the resources throughout Africa.

It is a simple truth that getting these resources was also ways going to be easier if you imposed your own puppet government on the people through some fake pretext of advancing the oppressed. To do this you first had to make sure the masses remained ignorant, hence the liberation before education program. Then you also had to marginalize the middleclass because they could not be fooled so easily. That’s why we have a perverted policy of affirmative action. Those who benefited became putty in the cabal’s hands.
Now is it any wonder that China is becoming the preferred role player?

Observe the first appointment to parliament !!

Its what the ANC have wanted all along, an unaccountable incompetent morass, to allow them to thieve and plunder at will.

Our search for evidence takes us to rural areas where people share resources in clans under the leadership of a chief in traditional communities. We consider the lack of economic development and the lack of basic hygiene, sewage, running water, viable and satisfactory agricultural production and the poor state of human existence. The communalist does not even take the responsibility to dig a pit latrine for his family. They even share this resource when they use the river or the bush. This is the manifestation of the Malthusian Trap that states that communalism enables the most unscrupulous individuals to exploit the rest by plundering the common resource. The people are poor and hungry. They suffer the victim mentality and begs for favours from the chief.

Then, we gather information on the other side of the thin barbed-wire fence where a farmer on the other side of the border enjoys property rights. His land is fertile, and not degraded like in the traditional land next door. His cattle are fertile and fat. His house has running water, a modern sewage system and electricity from a solar system. This farmer owns equipment and machinery. He does not plunder his own resource because he owns the title deed. He is accountable and acts responsibly because free-market capitalism incentives accountability. He even pays taxes to support his neighbours’ social grant.

This proves that we can never rid the ANC of corruption and plunder. Economic decay is inherent to the socialist system. Bankruptcy and famine are unavoidable because the Malthusian Trap dictates that famine controls the population size under socialism. The Zondo Commission will not change the ANC, it merely presents evidence to show the true character and heart of the ANC. The Zondo Commission warns about what lies ahead under ANC rule, for we can simply extrapolate the trend into the future for as long as the mindset and ethos of the ruling party remain the same. Basic logic.

The local population size has to shrink by at least 30% to compensate for ANC economic policies, and even then, circumstances will be similar to the rural traditional lands at best. The ANC manifesto is the manifesto of plunder and famine. Socialists vote for famine, and when famine eventually arrives, they play the victim card once again.

Socialism is a philosophy of failure, the creed of ignorance, and the gospel of envy, its inherent virtue is the equal sharing of misery. – Winston Churchill

Full marks to the brave whistleblowers.

They have been castrated man !!!