Commission now wants to know how many transactions above R10bn were presented to the board in the last three years.
By Tebogo Tshwane 10 Apr 2019  00:19 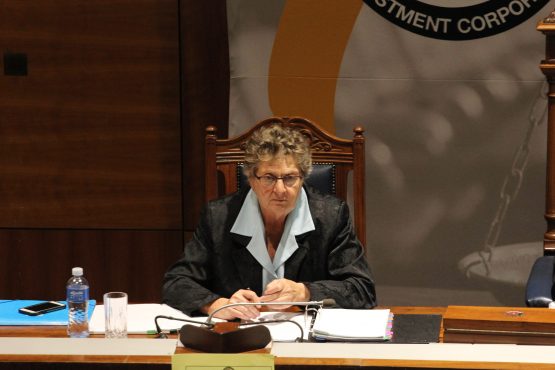 Commission assistant Gill Marcus said that if it is common practice for loan applications to fall below the R10bn threshold, this could be seen as a ‘decision’ to bypass the delegation of authority and good governance at the PIC. Picture: Moneyweb

The investment processes followed by the Public Investment Corporation (PIC) have again come under scrutiny, this time prompted by the state asset manager’s loan to Steinhoff International’s empowerment partner, the Lancaster Group, the amount of which was reduced in order to bypass board approval.

The judicial inquiry probing issues of impropriety at the PIC heard on Tuesday that in July 2016 Lancaster, led by former trade unionist Jayendra Naidoo, had initially approached the PIC for a R10.4 billion loan in order to purchase a 3% stake in Steinhoff.

When the final transaction was concluded, R1 billion had been shaved off the original amount. Lancaster was awarded R9.4 billion, which went towards transaction fees and the purchase of a 2.75% stake in the company.

“I can only speculate,” said the PIC’s Vusumuzi Raseroka (fund manager for private equity and structured investment products), “that the reduction was to enable the transaction to fall within the mandate limit of the investment committee, in terms of the specific product category, which, if exceeded, would have resulted in the transaction requiring full approval from the PIC board.”

All transactions above R10 billion need to go to the PIC’s board for approval while those that fall below this threshold can be concluded at investment committee level. Going through the board would have delayed the approval of the transaction, and Lancaster would not have been able to buy Steinhoff’s shares because the company was approaching a closed period starting in August.

Raseroka assured the commission on Tuesday that PIC processes were not flouted and that there was nothing untoward about the move to reduce the loan amount.

But commission assistant Gill Marcus was not satisfied with this explanation and asked for the inquiry’s investigation team to review how many transactions above R10 billion had been presented to the full PIC board in the last three years.

The commission’s terms of reference include assessing the governance structures of the PIC and making recommendations about the investment decision-making framework and the delegation of authority.

“If it is common practice to ensure that all your decisions are [for loan applications] below R10 billion, [then] in terms of the terms of reference of this commission, it becomes a governance issue,” said Marcus.

She described such a practice as a “decision” to bypass the delegation of authority and good governance in the PIC, and could be interpreted that way if it happened often.

Raseroka agreed but could not say whether it happened regularly, testifying that he only had insight into the transactions he worked on.

The PIC’s investments have come under the microscope at the commission where, on more than one occasion, witnesses have cited time pressures as an excuse for not applying rigorous governance and investment processes in transactions.

The state asset manager invests money on behalf of the Government Employees Pension Fund and other social funds, with assets amounting to over R2 trillion.

PIC investment associate Botsang Morobe, who also testified on Tuesday, said that within a year of granting the loan so Lancaster could acquire a 2.75% stake in Steinhoff – also known as Project Sierra – the company’s share price started declining. This affected the PIC’s security package as it had hedged the investment with a collar option.

Lancaster’s Naidoo approached the PIC with a proposal to restructure the agreement, where the state asset manager would buy an 11.8% shareholding in Steinhoff Africa Retail, now known as Pepkor. These shares would then be pledged to the PIC, which would offer it a more enhanced security package. The acquisition was made through the companies that formed part of the empowerment vehicle, Lancaster 101 and Lancaster 102, in which the PIC holds a 50% stake.

In order to buy Pepkor’s shares, the PIC had to cede the security option that protected it from a decline in the value of Steinhoff’s shares to Citibank in exchange for a loan. This was called Project Blue Buck.

Project Blue Buck was completed ahead of Steinhoff’s collapse in December 2017 when the company’s auditors refused to sign its financials because of “accounting irregularities” leaving the PIC completely unprotected with an impairment of R4.3-billion on its R9.35 billion investment.

Morobe said the impairment would have been wider had the PIC not restructured the agreement and remained with Project Sierra.

But the real problem is this – the international community see no resolution, no prosecutions, the same ANC list with the same scoundrels on, and the same toxic and vindictive behavior from ANC members.

That you cannot resolve this means the ANC will never be able to grow SA’s economy – NEVER.

It is common knowledge that Mr Naidoo of Lancaster 101 and Lancaster 102 has been “politically connected” all his adult life, via trade unions.

He was also connect with the 1990’s Arms Deal which shows “political connected”.

To any logical person these deals (Project Sierra and Project Blue Buck) reeks of “a Scheme” to enrich individuals and nothing to do with BEE.

Mr Naidoo is currently the Chairman of Pepkor, clearly there is conflict of interest.

They are NOT adhering to the JSE’s BEE and Gender Equality regulations.

One just needs to do a research on Pepkor website which confirms the above fact. This is criminal and needs to be addressed.

Don’t invest in such listed enterprises !

Lancaster 101, i.e. Mr Naidoo was enriched by 23 million for “commissions” relating to the deals…… WOW, clearly “redistribution of wealth”, but this is a “Robin Hood” scheme in reverse……

“take from the poor and give to the rich”.

Does Mr Naidoo represents the social and corporate values of a listed company, Pepkor?

Extract from The Star newspaper this morning regarding the PIC investment into Steinhoff;

“The ownership of Lancaster SPV would be 50 percent held by the Government Employees Pension Fund (GEPF), 25 percent by Lancaster Group and 25 percent by a B-BBEE group. Lancaster SPV would be capitalised by GEPF and Lancaster Group through a contribution of R50 million each.
The total costs for Project Sierra totalled more than R9.4bn broken down as R9bn for the acquisition of shares, R100m for transaction costs and R350m for a ratio collar premium”.

Can someone explain the meaning of, “Ratio Collar Premium”. In a letter to customers at one of its sites in Johannesburg the company said it suppliers are struggling to keep up as Eskom, cuts as much as 6 000 megawatts from the national grid.