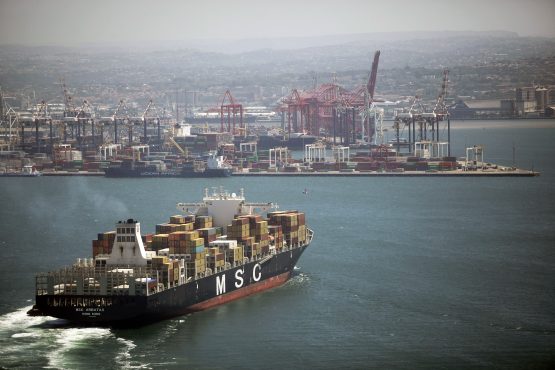 The MSC Arbatax container ship approaches the dock at the Port of Durban, operated by Transnet. Image: Kevin Sutherland/Bloomberg.

“The port has gradually resumed operations to discharge and food, medical supplies and petrol has been prioritised, said Zikalala.”

Durban, which is the biggest city in the KwaZulu-Natal province, experienced the heaviest rains in six decades, earlier in April.

The Port of Durban handles 60% of the country’s shipments and transporting of goods and commodities to and from nations in the region as far north as the Democratic Republic of Congo.

Africa’s most developed economy allocated a billion rand to date for disaster funds, after declaring a national state of disaster earlier this week. Floods have killed 485 people, and left the province with significant infrastructure damage.

The South African army has deployed 10000 troops to help with search and rescue efforts, delivery of food and water, and to help rebuild collapsed roads and bridges.

Water tankers have been sent to areas to ensure the supply of clean water, and work is underway to restore electricity.

The government will set up 4000 temporary residential units by the end of the week, said Zikalala, with ore permanent housing expected within six to eight months. Fifty four people remain missing, with search and rescue efforts continuing, said Zikalala.