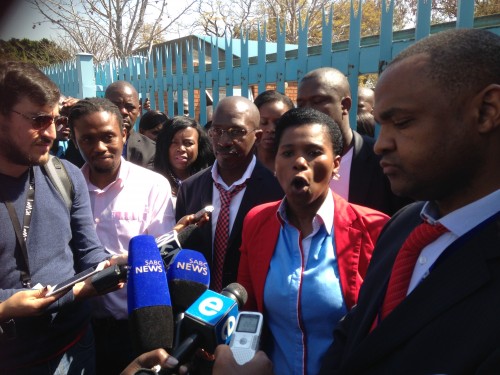 Staff members of embattled Passenger Rail Agency (Prasa) are demanding government intervention at the organisation and the reinstatement of former CEO Lucky Montana.

This was communicated at a press briefing on Wednesday morning outside the gate of the corporate offices after they were denied the use of the Prasa conference room for the purpose.

Prasa group chief strategy officer Sipho Sithole told Moneyweb after the briefing, led by Prasa spokesperson Moffet Mofokeng, that it was unauthorised. He did not want to comment on the allegations made at the briefing.

This follows the derailment of one of Prasa’s Afro400 trains near Kimberley on Tuesday night. Prasa executive for mainline passenger services Mthuthuzeli Swartz said early indications are that the derailment is related to construction work on the line and said there is no connection between it and staff disgruntlement.

Montana was relieved of his duties a month ago amid allegations that the Afro400 trains Prasa bought from a Spanish supplier were too high and therefore unsuitable for local conditions.

Board chairman Popo Molefe at the time said Montana had resigned and was serving his notice period. He was relieved from serving the rest of the notice period after criticizing the board in public, Molefe said.

The Prasa workers on Wednesday morning said the board had not informed them of the reasons for relieving Montana of his duties and they had to learn what was going on at their own organisation through the media. They maintained the board’s decision about Montana was unlawful.

Mofokeng and senior managers Anele Mda and Sello Maluleke told journalists that workers were committed to the success of Prasa, but learnt with “shock, disgust and disbelief” about the departure of Montana and accusations against senior management.

They said employees were disengaged and paralysed with fear and “silent intimidation” by the Prasa board as anybody perceived to be pro-Montana was being investigated.

They said the board is currently running the organisation, instead of providing strategic leadership.

The workers criticised the appointment of a public relations agency at Prasa in what they said was in an unlawful manner. They said the agency had no track record, is “unknown to us” and “unGoogle-able”. Mofokeng said the workers would challenge this appointment in court.

They were further incensed by the reinstatement of senior managers who were earlier suspended, without them facing the anticipated disciplinary hearings.

The workers said they tried to discuss their grievances with Sithole and the board, but to no avail. They are calling on government to intervene and are circulating a petition to this effect to all 17 000 Prasa workers.

Mda also called upon Public Protector Thuli Madonsela to refrain from allowing herself to be used in a smear campaign against Montana. She questioned the fact that Madonsela had delayed her release of a report on alleged unlawful actions at Prasa in the light of new submissions. Mda asked why Madonsela re-opened an investigation that had been completed to allow for these submissions.

Yet another juicy scandal coming up, with the tail wagging the dog. If the locomotives are too tall, simply cut 20 cm off the wheels, but on one side only. Problem solved.

I think they are being ask for proof of qualifications; the year and what institution they got it. Maybe some picture proof of being capped ; something they should be proud off ??

One more incentive to pay your tax S.A citizens.
Is this not the same person that lied about his qualifications? what happened to that?

From bad to worse goes this merry-go-round…
How ironic that PRASA employees are circulating a petition for government, yes government, to intervene.
Surely taking your hot mess, to an even bigger mess for a solution, will not yield anything positive…

What does it say about the level of sophistication, intellect and competence of these people if they look at a constantly intoxicated communist with delusions of grandeur, called Gwede Mantashe, for help!