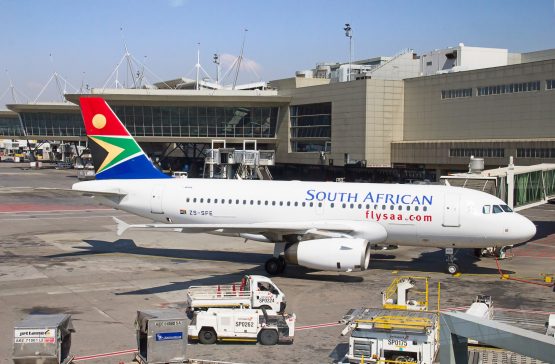 Despite the difficulties that SAAT has experienced over the last 12 months it recorded an operating profit of R239 million. Picture: Shutterstock

South African Airways Technical (SAAT) seems to be at risk of losing the business of its biggest external client Comair, and with it a large chunk of the R703 million external revenue the national carrier’s subsidiary earned in 2016/17.

Comair, which operates the British Airways and kulula.com brands locally, would not confirm to Moneyweb that it is looking at alternative service providers for technical support.

However at a recent media roundtable Comair CEO Erik Venter said that although SAAT still has the skills to do the actual job of aircraft repairs and maintenance, its ability to procure the right spares in time and plan the execution of the task has collapsed. As a result Comair has basically taken over the process planning and procurement for its own aircraft, he said.

Venter further stated that Comair is working with Lufthansa to establish the technical support of the new Boeing 737 MAX aircraft, the first of which Comair will receive in January next year.

He said the arrival of the new fleet will for the first time leave the airline with an aircraft on stand-by.

The maintenance of commercial aircraft is strictly regulated with certain prescribed operations to be done weekly and others at longer intervals. The work has to be done mostly during the night and be completed in time for the aircraft to resume flying the next morning. Any delays in maintenance operations could impact an airline’s ability to depart on time, which is a crucial requirement for good service delivery.

According to Airports Company South Africa (Acsa) data British Airways Domestic recorded 79.3% 15-minute on-time performance during February this year and 85.83% for the year to date. Kulula.com recorded 82.04% in February and 82.36% in the year to date.

This lags the performance of rival FlySafair which achieved 89.98% during February and 92.14% so far this year. FlySafair does most of its repairs and maintenance in-house.

Although maintenance is only one factor that might impact on-time performance, Venter recently admitted: “Over the past couple of months Comair has experienced an unreasonable number of technical and operational delays. We are actively working with our internal and external stakeholders to address the underlying causes and return our on-time performance to the international industry-accepted level our customers are used to.”

He further said Comair will shortly be making announcements that will improve efficiency of its airline operations. It is not yet clear what that will pertain to.

Nic Vlok, acting CEO of Mango told Moneyweb: “Due to additional work that had to be done following scheduled inspection tasks it resulted in delays in turnaround times (at SAAT) on Mango aircraft.”

SAAT has admitted to some delays with regard to heavy maintenance checks. This, it said, was “mostly due to additional work that had to be done following scheduled inspection tasks.”

Auditor-general Kimi Makwetu recently took the unusual step of disclosing his audit report for SAA for 2016/17 in parliament before SAA did. The report contained some harsh findings with regard to SAAT.

One of the factors that contributed to SAA’s qualified report was a lack of audit evidence for the R879 million valuation of SAAT’s inventory. In addition, Makwetu stated, “the existence of some inventory could not be verified and the company did not have adequate systems to collate and maintain data for cut-off of inventory scrapping.”

According to Makwetu the new AMOS accounting system used to maintain spare parts that was implemented on April 1 last year was migrated with unreliable information from the previous outdated MEMIS system. As a result “these spare parts could not be uniquely identifiable in the accounting system (SAP) used by SAA for financial reporting purposes. Reconciliation between the two accounting system(s) resulted in differences on a quarterly basis and the reconciling items [were] not properly investigated.”

SAA spokesperson Tlali Tlali described this as normal teething problems with a new IT system and said AMOS is now stable. He said there were no disruptions in customer schedules as a result and the group appointed an inventory controller to further strengthen SAAT.

He added that SAAT’s inventory levels “are being closely monitored to ensure that we have adequate stock levels. We expect to see improved working capital in the next 6 months”.

Tlali strongly denied that process and inventory management has virtually collapsed at SAAT. He said: “Nothing could be further from the truth. There have been random instances where SAAT would experience unscheduled maintenance that require parts which we do not ordinarily keep as inventory, and procurement of such parts would have longer lead times. Most components can only be obtained from the Original Equipment Manufacturers and lead times are not always negotiable.”

Tlali said the publicity around SAA’s liquidity problems has impacted the group’s credit record to some extent, with a few SMEs demanding payment upfront. “On the other hand, we have been able to engage with our major suppliers to allay their fears. The feedback from suppliers emanating from these engagements has been very encouraging and positive. If anything, these engagements have actually strengthened our relationships.”

He confirmed that SAA has asked aircraft manufacturers Boeing and Airbus to do a deep-dive assessment of SAAT. He said the main purpose is to get an independent view on SAAT operations from a third party, with benchmarks. This is currently being concluded.

Without the contribution of this subsidiary, the hole in which the SAA group finds itself would have been even deeper.

And so the onion layers start to peel away. As predicted, SAA will end up being a bankrupt shell of its glorious past.

……and SAA’s degradation is visable

One can safely assume the “invisible” infrastructure is hopelessly neglected

It’s not very unusual that the auditor general’s report got to Parliament before SAA’s; we’ve seen SAA almost being “shot dead” before just to get them to provide Parliament with audited financial statements.
Another report says Solidarity is applying to the court for SAA to go into business rescue. This is long overdue – Pravin Gordhan should have seen the writing on the wall some years ago and arranged business rescue in stead of the yet another guarantee he approved that time!

Did Comair ever get the money SAA owed it in terms of a court order for unfair competition? That case was a few years ago.

SAAT seemed best of a badly managed, looted lot but I have heard some seriously scary stories coming out of there; like SA Weather Service in terms of falling standards related to aviation. It would not surprise me if Comair were also considering moving out of technical quality concerns.