Presidency says 60 of the 71 companies that made pledges are responsible for these investments.
By Larry Claasen 9 Mar 2021  00:01 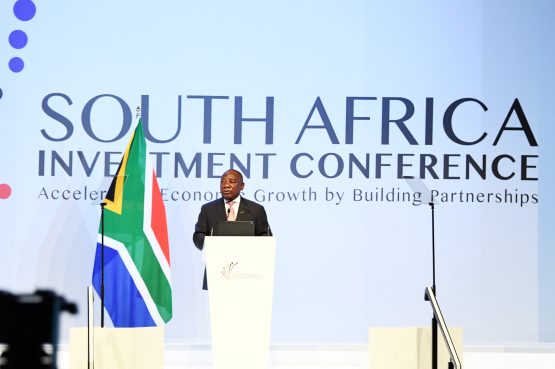 The R69bn has been invested across 13 economic sectors. Image: Siyabulela Duda

The presidency says that R69 billion of the R364 billion committed by corporations at the 2019 South Africa Investment Conference has “flowed into the economy”.

The now annual conference is an instrument set up by the government and big business to drive investment in the country and ignite economic growth.

At the time of the 2019 summit, President Cyril Ramaphosa said the R363 billion pledged by business was “a sign of confidence in the future of our country and the belief that the South African economy is poised for growth going into the future”.

He added: “It has been estimated that these investments will conservatively lead to the creation of around 412 000 direct jobs over the next five years.”

These investments are something of a victory for Ramaphosa as just a few months after saying this, the Covid-19 crisis struck, putting the country’s economy which was already on the backfoot under further pressure.

The presidency said R69 billion or 18.9% of the total value of the 2019 announcements have been implemented in a response to a parliamentary question from DA MP Manny de Freitas.

It said 60 of the 71 companies that made pledges are responsible for the flows of R69 billion and that the figure is based on quarterly updates received directly from the companies and reflect the status quo as at January 31, 2021.

The presidency gave no breakdown of which companies invested what amounts. At the time Toyota SA had committed to investing R2.85 billion and has since gone over this figure for the production of the new Corolla Cross sport utility vehicle (SUV) at its manufacturing plant in Prospecton near Durban.

The state-owned transportation group plans to spend R26 billion on capital investment in the 2021 financial year.

Though the presidency did not say which companies have made investments, it did release a list of the economic sectors involved, the number of investments made, and the nature of these investments.

It also noted that the 2019 investment announcements are “at different stages of progress and implementation and include site clearances, installation of bulk infrastructure, commissioning of plant equipment, and factory launches”.

“These activities are contributing to the creation of jobs and economic development across provinces.”

The R69bn so called pledged were planned anyway.

o’Dadaps. You again. You are again wrong.

I call it BS, Mr President!

He added: “It has been estimated that these investments will conservatively lead to the creation of around 412 000 direct jobs over the next five years.”

These socialists in the ANC do not comprehend the concept of property rights, therefore they still confuse an investment with a donation.

Benevolent people give money to the community when they pledge donations at a church bazaar. Investors want to earn money from the community, not give it away. Investors don’t pledge or make promises. They simply jump at the opportunity to make a profit. They act on incentives. They explore opportunities. The prospects of profits motivate them to employ capital and to take risks.

The government should simply move out of the way to allow investors to serve consumers and add value to resources and employ people and pay taxes in the process. Investors will create a sustainable tax base and jobs, whereas this socialist economy that is dependent on donations is falling apart.

ANC policies act as a huge barrier to entry for investors. The ANC policies remove the prospects for profits. They have expropriated the profit motive through socialist dogma and myopic ideas. That leaves them with no choice but to plunder investors in an ambush disguised as an investment summit.

Sounds like you are describing the Natural Law of Spontaneous Order.

Unfortunately no socialist or communist will ever understand that.

It’s worth a read
https://oll.libertyfund.org/page/the-tradition-of-spontaneous-order-a-bibliographical-essay-by-norman-barry

Speaks volumes about the atmosphere of confidence that the government has created in this period.

How does your family deal with your negativity

19%, that’s actually not bad for Ramaphosa.

“… and out again into the Dubai bank accounts of ANC bigwigs.”

412 000 new jobs to be created in five years – how many more babies are going to be born in five years, increasing the poverty?

Small start but we need 20 times more! Cut the red tape ANC! Just do something for a change!

The way I see it is that I can not put any value to the presidents announcement or for that matter any politician, which is a promise / prediction made by him / her. It is medium to long term predictions proudly made by the politician, but never meassured in real monetary / economical terms thereafter

A drop in the ocean and really nothing to gloat about. So thats about 80000 new jobs per year but with nearly a population growth of 1 million a year. That is not going maintain the beloved SASSA grants which accounts for 45% of the national budget. The pres may be rich as Croesus but a businessman he is not. Take for example the R 100 million allocated to kickstart the tourism sector business….as long as its black-owned. Very few tourism operations are black-owned at this stage, for reasons I am not going to go into now. Why would you exclude the grants from people who already have the competence and experience to reignite that industry?
It makes no economic sense to now enforce BEE policies.
Who in their right minds will invest money when he is hamstrung by political policies such as these? Businessmen hire capable and reliable people no matter their colour.

I literally don’t know why I read this or pretty much anything in SA these days. Without sounding like a terrible cynic, we are all just clinging on to straws and moaning about the ANC-mafiosa when (a) things will never change (save to worsen and that is seriously accelerating) and (b) us 5.9 % of the taxpaying base who pay for everything are the ones getting hammered the hardest. Its like being in an abusive marriage with an alcoholic. They will never change – you have to leave. Sadly here it probably means literally too

It looks very similar to the zimbabwe idea – looted everything possible, made a b-llsup of it and today sit with nothing left while the rest of the world is laughing at them. on top of it a “pledge” has sweet-blue-all to do with business – i want to see a return on money invested – it is not a donation. to date the anc and alliances has not come to grip with the basic economical rules in a “free” country . simply can’t get rid of the “we want idea, somebody owes to us and we are waiting for it”

How much of the R69 billion is it for the factories to be self-sufficient from Eskom?