Ramaphosa calls for discussion on utilising pension funds for projects 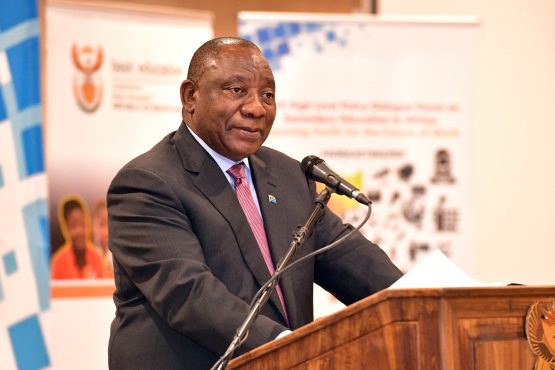 South Africa should discuss using worker pension funds to finance development and infrastructure projects, a proposal that has the backing of the country’s largest labour federation, President Cyril Ramaphosa said on Thursday.

In its 2019 poll manifesto ahead of the May general election, the ruling African National Congress (ANC) mentioned investigating prescribed assets – where the government authorises the investment of retirement savings in certain developmental assets – but was short on specific details.

“We need to discuss this matter (prescribed assets) and we need to discuss it with a view to actually saying what is it we can do to utilise the various resources in our country to generate growth in a purposeful manner,” Ramaphosa told lawmakers.

Analysts and opposition parties have raised concerns that prescribed assets would allow government to tap funds from the Public Investment Corporation (PIC), which manages more than 2 trillion rand of government employee pensions and is Africa’s biggest fund manager.

The ANC’s economics head told the Sunday Times newspaper last weekend that the party was eyeing prescribed assets to avoid any intervention from the International Monetary Fund (IMF) due to South Africa’s precarious economy.

The IMF said earlier this month that although South Africa’s debt levels were approaching uncomfortable levels, the government had made no request for help.

Ramaphosa, who has staked his presidency on turning a moribund economy around, said the ANC’s traditional labour alliance partner, Cosatu, supported plans to consider using workers’ pensions to pay for infrastructure projects.

Cosatu, the largest labour federation with around 1.6 million workers and which is in an alliance with the ANC, said it supported in principle the proposal to access pension funds.

“We are supportive of that position but it is conditional. We believe those are the resources that can be utilised to fix a utility like Eskom that is very important to the economy,” Cosatu spokesman Sizwe Pamla told Reuters.

It is clear what the intention is. They will take your pension.

He then refers to the previous regime doing just that.

Where the deceit comes in is he does not mention that the prescribed assets those days made money.

Honesty is not a strong point here.

Honesty is absent, has always been.

Yes. They are after your pension. And think about the implications here: in the old days, pre 1989, the government forced pension funds to make 50% of their investments in prescribed assets. So. Half of your pension fund goes to prop up failing SOEs like Eskom, but this is only a stopgap. Eventually Eskom and SAA are bust, and pensions have been plundered completely. The IMF steps in and forces the regime to sell SAA and other SOEs for 1 rand to the first party willing to take it of their hands. Half your pension gone. You are reduced to eating cat food in your old age.

He is being rational and he has looked at all options. There isn’t a good option here to fix issues in the country. Out of all of the things we could consider, I agree that this is (unfortunately) the best option.

How do you trust the people that can not run the Koppies sewage works properly to look after your investments.

They will not get rid of any of the bloated workforce at any of these future prescribed assets and management of these “assets” will be a continuation of incapable, corrupt cadre deployment.

What we need to rather talk about in detail is owner managed offshore living annuities. That will be time better spent.

I disagree as well.
It is the worst possible option.

The best option is still to privatize SOE’s, break the monopolies of critical sectors like electricity (they are disingenioud by protesting how expensive it is for Eskom to buy power from IPP’s, when the simplest solution is to let consumers buy contracts directly from their choice of producer), and pass a law that forbids govt and business from mixing.
Separation church and state, of business and govt, and of labour and politics.

Anyways, breaking the monopoly introduces alternatives so that if eskom fails someone else can pick up the slack.
Selling SOE’s brings money which can be used to pay down debts. And with SOE’s forced to run for profit, they can contribute taxes and dividends. And no more bailouts which means more money for education, healthcare and infrastructure.

Prescribed assets, especially under this govt, will destroy the entire country’s savings.

Touch my pension and the consequence will be SEVERE !!!!

Would love to know what you’re planning.

They touch my pension, it will be the final straw for me. I WILL leave this banana republic, and take all my money and skills along with it.

It will be the death knell to this country…

Best get a move on…

Exchange controls will follow shortly, to stop you from taking their pension funds away. You save for the good of the people not for your own retirement, cant you see the bigger picture….

Tick tock, tick tock, moneys all going to the government…

The rest of us ….including all who has read this article are quite simply “rogered”

We might as well all sing a lost forgotten song….

“South Africa should discuss using worker pension funds to finance development and infrastructure projects“. How about a bit of honesty here for once. You are looking at using people’s pensions to plug the holes caused by your Governments fraud, corruption and theft of taxpayers money. Absolutely disgusting to double dip on poor taxpayers and pension fund holders. Enough now !

People, let’s not be negative:

The part that will go into prescribed assets, will fetch inflation-beating 8+% returns in your & my RA Fund (and Pension/Provident/Preservation), as higher % is paid when investing in higher-risk junk-bonds state projects/SOE’s.

Remember, it’s the SA TAXPAYER (again you and me) that will ensure the state SOE is able to honor their bond-obligations to fund investors.

Your retirement fund itself could do well with solid 8+% interest income (but ‘thankfully’ your PAYE tax could be higher, to indirectly pay for your own fund’s liquidity 😉 Talking about financing yourself in circles!

But……WHAT HAPPENS when taxpayer’s revenue starts to dry up, and state start defaulting on bonds owed to ret funds??
Don’t worry, you’ll still see a nice % return (along with the capital) on your refund-report, but you will not be able to access such funds linked to SOE’s. Almost like the “ABIL” (African Bank) dilemma.
“Sir/madam, we are pleased to report you have R3mil left in your living annuity according to your latest Fund-statement, of which R2,2mil is available to draw upon in future. The R800K is set aside, frozen, awaiting for state to pay”. But no reason for corcern, it’s still your money….herewith we provide you with your annually updated “Govt IOU slip”….al la Zim.

Which part of “NO” don’t you understand?

The cure is not theiving more Other Peoples’ Money but stopping the rot in the ANC and all the SOEs and departments it runs.

This will narrow down the scope of potential infrastructure projects, if government wants to offer an acceptable return to the pension funds.

So what’s next to bugger up? Well, anything that’s still working. So

And of course, private pensions.

Rest assured, this government will not be satisfied until everything has been buggered up.

Exactly. The ANC still lags far behind their heroes, the ZANU-PF.

I think for all our sake we have no option. However if this is managed properly and get a decent return could help turn SA around. However bailing Eskom and other SOE is not on. Once we are on a positive path Eskom is split and start reducing the bloated work force and in other entities then I will be happy to contribute some of my fund’s

IMF will hurt us badly.

Sadly, I think you’re dead right. Just that it had to come down to this.

However, still no evidence we will get onto a positive path. To do this will take an abandonment of a victim mentality, a socialist agenda, a return to honesty and meritocracy, and a bit more besides.

If this was such a good idea, then why haven’t private pension funds or the PIC approached government willingly with their money to invest? They haven’t, and therefore, I believe they don’t think that investing in Government is in the best interests of their memebers…enough said!

But fine, explain to the union that the ability of the projects to deliver its intended benefits will directly determine their pensions, who knows : projects might get finished faster and cheaper. But I am not holding my breath.

What the fool does not seem to appreciate is that retirement funds have been financing infrastructure and development projects for decades and the likes of Eskom for much longer.