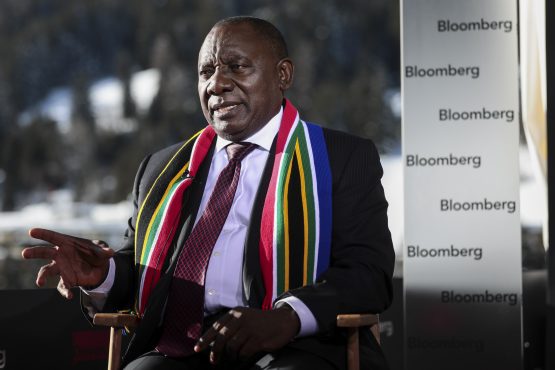 Ramaphosa has made reforming Eskom a priority since his election as president. Picture: Simon Dawson/Bloomberg

A month after Cyril Ramaphosa took the helm of South Africa‘s ruling African National Congress (ANC) in December, he called an urgent meeting with then-President Jacob Zuma and senior ministers to save state power firm Eskom.

Ramaphosa understood sweeping changes were needed at the struggling utility company. He persuaded Zuma to replace Eskom’s board and name a new chief executive to appease investors such as the World Bank, according to an official at the meeting.

It was Ramaphosa’s first major policy intervention since becoming ANC leader and signalled a determination to reform Eskom, a company nearing breaking point after a string of corruption scandals during Zuma’s nine years in office.

Eskom is critical to South Africa. It supplies more than 90% of the country’s power, has R220 billion  ($17 billion) of state-guaranteed debt and is often cited as a threat to South Africa‘s credit ratings, which are near junk status.

“If Eskom were to collapse, it would be a catastrophe for generations to come,” said the official, who declined to be named. “Ramaphosa explained to Zuma that it was time to act.”

Ramaphosa still faces a battle keeping Eskom afloat: new instances of fraud under the firm’s previous management are still being uncovered, a sluggish economy means demand for power is tepid and powerful labour unions are likely to resist change.

But what may help Ramaphosa is a realisation in the upper echelons of the ANC that Eskom is no longer untouchable, sources in the ruling party said.

Since replacing Zuma as president in February, Ramaphosa has pressed on with reform, surprising many with the speed at which he is addressing problems at Eskom that have festered for years.

Ramaphosa appointed respected former finance minister Pravin Gordhan to guide turnaround efforts, directed new executives to produce a plan to stabilise the company’s finances and halted a nuclear deal supported by Zuma that could have saddled Eskom with billions of dollars of additional debt.

Asked for comment about Ramaphosa’s role in efforts to reform Eskom, his spokeswoman Khusela Diko said the president met regularly with Gordhan to discuss Eskom and that revamping the company was a priority.

A spokesman for Zuma was not available for comment.

Eskom also employs 47 000 people and has powerful labour unions, some allied with the ANC and others more militant, that have said they will resist attempts to cut the workforce and fight moves to privatise the company.

However, ANC sources say Ramaphosa has secured the backing of senior figures in the ruling party for a radical overhaul of Eskom, one which will involve attracting greater private investment into the electricity supply industry.

“From an ideological standpoint, Eskom presents a real challenge for the ANC,” said a source in the ANC executive close to Ramaphosa. “Greater private sector involvement does not sit well with some in the party, but there is no other option.”

The official involved in the meeting with Zuma, who holds a senior position in the ANC, said there had been a discussion about which assets should be considered “non-core” and sold.

The idea that outside investors may be needed to save the company is a dramatic shift for a political party that has rejected any form of privatisation of Eskom for years.

The desire for change is partly driven by a realisation that Eskom is more fragile than many believed. The situation came to a head in November when the World Bank held a flurry of meetings with senior government officials.

Eskom had less than R10 billion of cash, commercial banks had suspended lending and government officials feared the World Bank might do the same at a time when South Africa‘s last investment-grade credit ratings were hanging by a thread.

Eskom spokesman Khulu Phasiwe said the World Bank expressed “concerns on progress made on a specific project” at a meeting with Eskom executives and also raised governance concerns but had not told the company it planned to withdraw funding.

A senior World Bank official said Eskom, which has borrowed $3 billion from the bank for projects including the Medupi coal-fired plant and renewables ventures, had not defaulted on World Bank loans and the lender did not threaten to suspend lending.

Workers went on strike in June over pay, forcing the utility to cut power supplies over three days for the first time since 2015, when rolling blackouts cost the economy billions of dollars a month.

As South Africans huddled around candles again, commentators joked that Ramaphosa’s pledge to usher in a “New Dawn” after a decade of stagnation had turned into a “New Dusk”.

Eskom had proposed a wage freeze due to financial constraints, even though inflation is running at about 5%. The unions were holding out for an increase of at least 15% in an increasingly acrimonious dispute.

Ramaphosa used his close ties to South Africa‘s largest union federation Cosatu (Congress of South African Trade Unions) to make headway and in what was seen by unions as an unusual move, Gordhan intervened personally.

Gordhan called Cosatu to a meeting last month and promised that Eskom would rethink its refusal to raise wages, setting the stage for a deal of about 7% that is being ironed out.

“It was unprecedented that Minister Gordhan met us to unlock the dispute,” said Sdumo Dlamini, president of Cosatu, which has more than 10 000 members at Eskom via its National Union of Mineworkers (Num) affiliate. “The talks were constructive, and we agreed to meet again to discuss Eskom.”

While Ramaphosa’s resolve to fix Eskom doesn’t seem in doubt, most analysts believe it will still take time.

“After the maladministration and corruption under the previous management, the new board is a step in the right direction,” said Ronald Chauke, energy portfolio manager at South Africa‘s Organisation Undoing Tax Abuse.

“But it will take five to 10 years to restructure Eskom properly. Ramaphosa will need a war room to fix the rot.”

Attempts to sell off parts of Eskom will be vehemently opposed by some labour unions and conservative sections of the ANC wary of relinquishing control over parts of the power grid.

The National Union of Metalworkers of South Africa (Numsa), a militant group with several thousand Eskom workers, has called for a meeting with Gordhan, Finance Minister Nhlanhla Nene and other unions to discuss Eskom.

“We are vigilant about plans to restructure state firms because that usually leads to job losses,” Numsa general secretary Irvin Jim said. “We reject privatising Eskom with the contempt it deserves.”

Analysts say any cuts to Eskom’s bloated workforce are likely to be delayed until after next year’s national election, where high unemployment will be a hot-button issue.

But Ramaphosa, who played a key role in talks to end white minority rule more than two decades ago, has a reputation for making headway in difficult negotiations.

“Ramaphosa won’t make quick progress with the radical restructuring needed to shore up Eskom’s balance sheet as he balances divergent interests in the ANC before the election,” said Darias Jonker, director for Africa at Eurasia Group.

“But he will get there eventually.”

Hehehe, so the plan to get ESKOM out of the debt-sinkhole, is to expropriate the assets (pensions) of government employees, of whom the majority are ANC supporters, and use it to fill up the sinkhole. This means that the PIC, on behalf of ANC supporters will own a sinkhole. If this is not divine justice, I don’t know what it is…….Cadres paying for the sins of the cadres….I love it!

Unfortunately, when PIC can no longer fund the pensions, the guaranteed benefit pension fund will have to topped up by……………the tax payer!!!
It is the tax payer paying for the sins of the cadres.

And why does Cyril the squirrel not prosecute those guilty of theft?

Totally agree!?? This is the first thing that should happen, if CR wants to gain any credibility in the future. And taking it further ALL those that were involved in theft/corruption (aka. “State Capture”) should be charged and prosecuted in a court of law.