Plans to lure $100 billion to the country are ahead of target.
By Guy Johnson, Amogelang Mbatha and Ntando Thukwana, Bloomberg 26 Oct 2018  14:10 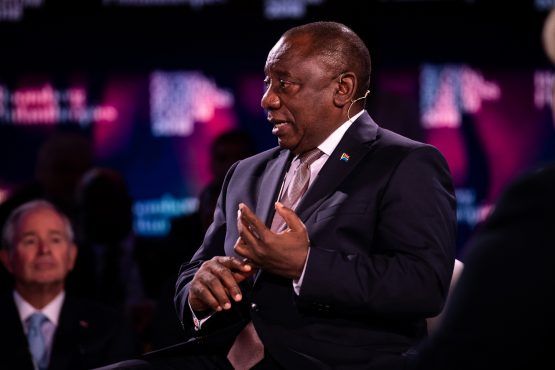 South African President Cyril Ramaphosa said he’s been “overwhelmed” by the level of interest in an investment summit he opened on Friday and that his plans to lure $100 billion over the next five years are well ahead of target.

With elections due to take place next year, Ramaphosa needs to show he’s delivering on pledges to revive an economy mired in recession and create jobs for the 27 percent of the workforce that’s unemployed. Since announcing the investment drive in April, China, the U.K., the U.A.E., Saudi Arabia and Daimler AG’s Mercedes-Benz unit have pledged $35.5 billion.

Companies pledged to invest more than $8 billion on Friday, including a $6 billion commitment from Anglo American Plc, although not all the money is new. Further announcements are expected later in the day.

“We are making enormous progress,” Ramaphosa said in an interview with Bloomberg Television at the investment conference in Johannesburg, which attracted more than 1,000 delegates. “I think we are ahead of the track, we are way ahead, and I am overwhelmed by the level of interest in the South African economy.”

The summit comes two days after Finance Minister Tito Mboweni unveiled a mid-term budget that slashed economic growth forecasts and showed government debt peaking later and at higher levels than previously anticipated. The gloomy outlook triggered a sell-off in the rand and the nation’s bonds, and raised fears the country could lose its sole investment-grade credit rating from Moody’s Investors Service.

“After this, things get better because we know we are able to wrap our arms around what needs to be done,” said Ramaphosa, who expressed confidence that another ratings downgrade could be avoided. “We are repositioning our economy and beyond this, I am confident that we will have done a pretty good job to put South Africa on a winning path once again.”

Ramaphosa, a 65-year-old lawyer and former labor-union leader, took office in February, after the ruling party forced Jacob Zuma to step down following an almost nine-year tenure that was marred by scandal, policy missteps and inappropriate appointments.

“We now know how serious and how deep the problem was,” Ramaphosa said. “We now know what needs to be corrected. We now know the type of skills that we need and the type of people that we have to put in place to repair the damage that has been done in the past nine years, and it is huge damage, but we are repairing it.”

These are the investment commitments announced on Friday:

Sappi, the world’s biggest producer of dissolving wood pulp, is planning a $526-million upgrade and expansion of its Saiccor Mill, while packaging company Mondi will invest $544 million in expanding its capacity.

Vedanta Resources has completed a feasibility study for a $350 million investment in a zinc mine project and processing plant. It is also considering spending $700 million to $800 million on a smelter and refinery complex. About $306 million is being invested in the Ivanplats platinum project, owned by Ivanhoe Mines, a Japanese consortium led by Japan’s Itochu Corp. and local community groups.

Bushveld Minerals Ltd. intends allocating as much as $170 million over the next three years expanding its capacity to produce and process vanadium.

Telecommunications company Rain Telecom plans to spend $68 million on a 5G high-speed network Mara Corp, a Rwanda-based company, has earmarked $100 million for establishing a plant that will produce smartphones in South Africa.

Spend less time on the charm offensive and more time on delivering a positive business climate.. the investors will automatically come.

Best recent growth stories of the world were always led by gvmt getting their house in order and getting infrastructure, policy and service delivery going first.

This is Africa…We do things the African way here. Get with the program. Go sell your advice in China Boet

“This is Africa…We do things the African way here”…and your point is? Famine,… as Gone AWOL said “delivering a positive business climate..the investors will automatically come” way easier then the African way.

President Ramaphosa and his team are doing a great job.

It is now or never.

Good job sir, nice to see all these project startups. We’ll probably only see things really steamroll ahead after elections when he can overhaul his cabinet which quite frankly has too many members and who have poor records.

Thanks Cyril, also for starting the clean up at the NPA.

After 20 years of the financial abuse by the ANC ruling party elite, the same ANC party elite, Now expect the world to trust them…Talk is cheap…unfortunately, there is a lot of fairy tales that start with “Invest in …and I promise…”South Africa should not have been at this point, after 1994 we had a running start to possible Africa success story, but ANC political greed and power tanked this country.

President CR is doing some of the right things. However, we have seen these ANC promises before every election. We need to see the cash and the results.

The ANC government is still ruling for the party instead of the country. The basic problems remain. CR wants to throw more money at local authority infrastructure but the cadre deployments maintains the inefficiency. He wants to improve education but the trade union Sadtu remains the biggest problem in education.

CR wants to create more jobs but population growth is making a mockery of the effort. If a country creates more people than jobs, the people will get poorer.

At “WeAreOne – the African way”: China, Japan, Singapore and many other successful countries had the humility to take the best methods and practices from around the world to improve their economies and they and their populations benefitted.

Yes , and a level of incompetence which we all thought did not exist in SA . To give everyone a fair chance to prove himself , is very democratic , but has no link to economic reality .
Only by utilizing your best human resources , do you have a chance to
survive in the global economy , and even then there are no guarentees .
With the economic tide going out , we are left severely exposed , as n nation failing to utilize our best resource , our skilled professionals .

Does it really take 3 people to write this junk?

A nothing report/article that just raises one’s hackles.

MW maybe yours truly is the only one to be so, so weary of this type of trash that you print ad nausem. (Antoinette’s article is a rare exception.) Your readers may not be superstars but most of them/us do try to think.

The drivel from Bloomberg is laughable in it’s content and delivery. Unless the money is in the bank, sods are being turned, suppliers paid and structures, physical or virtual can be identified, the views expressed in the article are hot air.

I am not commenting on the success, truth, usefulness etc of the investments. I just hope they improve the ZAR / US$ rate and stabilise property values. Thank you.

Any private / retail investors out there convinced to put their own money on the table? I will not.

There is nothing that changes the game for an investor. Eskom is a big elephant and that pile of debt won’t just disappear. 15% electricity increases per year will not get you any manufacturing capacity investment.

Tellingly there has been no commitment to keep tax / BEE/ charter requirements the same for the next 20 years. Davies and Patel are still in their roles.

The role of the state is actually expanding when you look at the recently expanded powers of the competition commission.

“Smoke and mirrors”. past ten years SA had about USD 77bn FDI ( for new projects) . How do we distinguish between additional FDI and normal FDI?