Including the possible scrapping of the alcohol sales ban.
By Paul Vecchiatto and Janice Kew, Bloomberg 12 Aug 2020  15:05 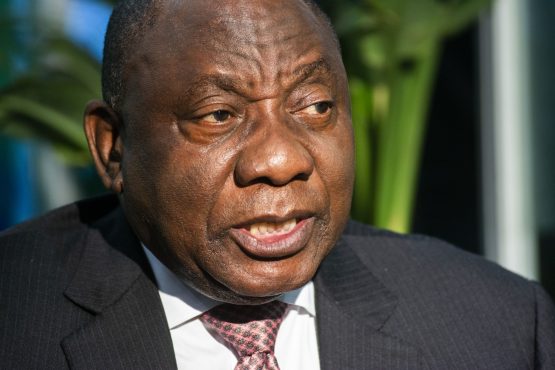 South African President Cyril Ramaphosa is preparing to ease lockdown restrictions, including the possible scrapping of an alcohol sales ban, according to people familiar with the matter.

The country will move to so-called alert level 2, although details of which curbs will be retained are still being worked out, said four of the people, asking not to be identified because the information hasn’t been made public. Two said a decision had been taken to allow alcohol to be sold, two said the tobacco-sales ban would be scrapped and one said travel restrictions would be relaxed.

Most businesses were shuttered for five weeks from late March, when the government imposed one of the world’s most severe lockdowns to curb the spread of the coronavirus. Infections skyrocketed after the restrictions were progressively eased to allow most people to return to work and the country has now had 566,109 confirmed cases, the fifth-most in the world.

Health Minister Zweli Mkhize said in a radio interview on Wednesday that the lockdown rules should be eased because there have been declines in cases in the four most-populous provinces. In addition, doctors are now expecting fatalities to be lower than previously feared.

The lockdown has had a devastating effect on Africa’s most industrialised economy, with both the central bank and National Treasury anticipating it will contract more than 7% this year. A study by a group of 30 academics and researchers estimated that 3 million people lost their jobs between February and April, while 1.5 million others were furloughed.

Cyril is just a meat puppet. His boss, the real president, still has to OK this. I’ll only believe it when the foul-tempered hag announces this herself.

No no no no peoples!

You forget! Luckily I will remind you. An injury to one is an injury to all. For as long as any of us is suffering with the virus, we ALL shall suffer without taking the alcohol, without sharing the zol and without visiting our families.

Correct.
We are a one-party state with one true boss and her name aint Cyril.

You are so right especially when you consider the next party with no infighting and growing is the EFF while the DA tries to self destruct.

Cyril about to do the bleeding obvious?

And then we have to thank him like obedient 3 year olds?

This is how hell must operate. But then that’s what this country is fast becoming – a hell on earth.

He was never the president from the beginning. The guys does not have power at all.

Squirrel can say what he wants but it counts for nothing until NDZol ha spoken !!!!

Exactly. More like “NDZ decides to ease lockdown restrictions, her spokesman CR will make an announcement”.

NDZ will ease on everything except smoking ban

Methinks someone is trying to save face, and want to be in the good books of SA taxpayers, come 31 August.

(Sorry pres, too late for that now….damage to taxpayers have been DONE. Kindly loan more from the IMF.)

Lockdown is a knee-jerk overreaction by ignorant academics and self-serving politicians that destroyed many entrepreneurs and millions of jobs. No act that harms economic progress can benefit humans in any way. The naive socialists dug their own grave with the slogan that “lives are more important than the economy”. This phrase is the ultimate display of ignorance and naivety. Human welfare, quality of life, security and health, depend on economic progress. Only entrepreneurs can create a positive environment for the human condition.

When the Central Planning WHO and Coronavirus Central Command Council, with their myopic academics and politicians, shut the economy down, they also destroyed the future quality of life of millions of people at the same time.

It is shocking how many intelligent people support this infringement on property rights. Many educated individuals support any action that attacks the profit objective and hurts entrepreneurs. They jump at the opportunity to punish economic activity and entrepreneurship. They see these factors as the enemy. They ignore, or forget, the fact that their own lives depend on the successes of many entrepreneurs.

Winston Churchill explains this situation: “Socialism is the philosophy of failure, the creed of ignorance, and the gospel of envy.”

Winston Churchill explains this situation: “Socialism is the philosophy of failure, the creed of ignorance, and the gospel of envy.”

Sensei, you consistently come up with oustandingly accurate comments.

flopsy, if you think that my statements are accurate, then you are one of the few brave ones who dare to go against the consensus. The majority are like sheep, they seek safety in numbers. Most people are too lazy to think for themselves.

This brings us to a very important issue that we tend to take for granted. We still enjoy the right to freedom of expression. Without that right, voices like ours would have been silenced already. Take the situation in China for instance. There you have rights, only as long as you shut up.

Fantastic. I’ll convey the good news to my liquidator.

Ag no…. 🙁 And Cyril was hoping that you would be making a Provisional Tax payment come 31 August.

No tax payment = no govt wastage.

You have to love the response. When the virus starts to peak, the big unlock-down commences :).

SA is now well past the peak.
Maybe only the first peak, time will tell.

“A study by a group of 30 academics and researchers estimated that 3 million people lost their jobs between February and April, while 1.5 million others were furloughed.”

And in next year’s election, almost every one of the 3 million is going to vote for the ANC. Again. Almost like the basket case Dumbabwe where ZANU PF are still elected in every election.

I have noticed that I am “moderated” the whole time so I will be nice.

CR and his troop did a first class job. Wink Fing Wink.

Wonder why we ended up with a destroyed country? I guess I get moderated as they don’t want to hear that.

I suspect many will remember this for a long time to come.

I suspect theres a few people who are on the permanent moderation list by now.
Most of my comments make it through but occasionally one doesnt.

Oh well, freedom of expression to a degree still exists. No stasi have showed up at my door yet for an invitation to attend re-education classes.
Probably coming.

Good news if they do it – as the pressure in society is reaching a boiling point and i think the ANC senses it.

However, 4 months of an abrupt economic halt will take 10-20 years to repair.

6 months ago our group was handling a dozen or so international companies expansions into Africa, including RSA. Today this has mostly reversed. We are now dealing with down scaling, cancellations (in some cases just walking away from large investments already made), repatriations and nearly 3,000 retrenchments. Over 80% of these are in RSA, 2nd is Uganda and 3rd is Kenya – anecdotal maybe but also not coincidental that these 3 countries had and still have the most oppressive lock downs.

Uncle Rama must deveballs,he is not just an ordinary man he is President.

Comrade, he is like a aeroplane. Good in the air but useless on earth. He is not the only one.

Some in the private sector (small businesses with staff of about 50 permanent and many adhoc / temporary jobs) have lost employment AFTER April due to company closures while other small businesses of the same size are operating with questions about sustainability. The latter are offering retrenchments and cutting salaries for the second time since lockdown started.
Businesses in trade exhibition space and the various annual indabas countrywide haven’t been able to open due to no flights and other factors.
Post April millions are still becoming unemployed so double or treble the figures in the article.
Of course civil servants are largely uneffected; many like librarians are sitting idle at home earning full pay. And at national government level.

Malt was smelt on Monday in Newlands??

Oh yes please god. I’m not going to be caught again by a possible nuron misfire.

Major investment in beer the minute it opens up.

Please Madam, can I go to bed now? It is almost 11 madam