Ramaphosa says aims to resolve land issue ‘once and for all’

Dialogue with stakeholders soon to be initiated.
By Wendell Roelf, Reuters 1 Mar 2018  13:42 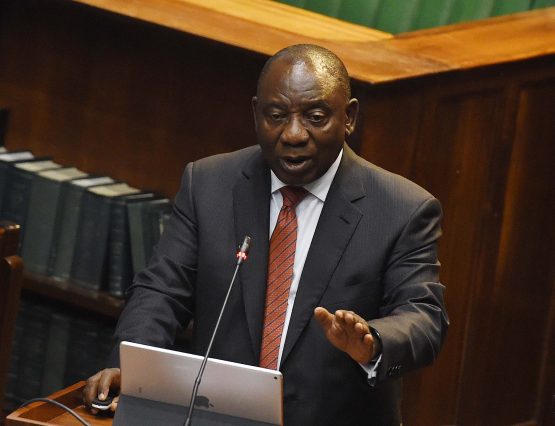 South African President Cyril Ramaphosa said on Thursday he wants talks on the thorny topic of land expropriation to avoid panic but aims to resolve the issue of racial disparities in property ownership “once and for all”.

South Africa took a step on Tuesday to hasten the transfer of land from white to black owners when parliament backed a motion seeking to change the constitution to allow land expropriation without compensation.

The ruling African National Congress (ANC) has long promised reforms to redress racial disparities in land ownership and the subject remains highly emotive more than two decades after the end of apartheid. Whites still own most of South Africa’s land following centuries of brutal colonial dispossession.

Ramaphosa said after his inauguration two weeks ago that he would speed up the transfer of land to black people, although he stressed that food production and security must be preserved.

“I will shortly initiate a dialogue with key stakeholders… There is no need for any one of us to panic and start beating war drums,” Ramaphosa said in parliament.

“We are going to address this and make sure that we come up with resolutions that resolve this once and for all. This original sin that was committed when our country was colonised must be resolved in a way that will take South Africa forward.”

Civil rights group AfriForum has said it will launch an international campaign to inform governments and foreign investors “that property rights in South Africa are being threatened”, it said in a statement.

AfriForum, an organisation that mostly represents white South Africans on issues like affirmative action, said foreign investments in South Africa will also not be safe should plans for land expropriation without compensation go ahead.

The ruling ANC adopted a policy at its conference in December to redress racial ownership disparities by expropriating land without compensation, pledging to do so in way that does not undermine food security in the country, Africa’s top maize producer.

It is still not clear when any change to Section 25 of the constitution to allow expropriation of land without compensation would take place.

Equality of outcome is not possible.

Equality of opportunity is: Check out property24 for farms that are for sale.

I rest my case.

If it’s approached on a Zim scale, then my question is: WHERE is Govt going to collect future Income Tax from?

Then everyone looks after himself, right? “A la Flintstones”.

(Don’t worry about PAYE compulsory deductions….companies/employers will by then cease to exist, and pension funds will fail. No income = no PAYE. Govt cease to exist. Masses starve. ANC gone.)

All that will happen if any land is expropriated without compensation,
the owners will go to court and win.

They will not win if the constitution is changed. Unfortunately the DA messed up things, so the ANC together with he EFF will get the 2/3 in parliament next year, maybe even 75%. It that happens they can change the constitution as much as they want.

Was it not to agree on the way forward for the future of the country?

Looks like that agreements with the ANC are not worth the paper written on.

CR you had better act really quickly or your plans to revitalise the economy are toast. The U turn in the rand should tell you exactly how serious this is. Not a cent of investment until this is sorted out. JZ stole the taxes that should have been used to redistribute land fairly. The ANC government spent less than 2% of our taxes on this. Now it is using EWC as a hand out to buy votes. You can go look for other taxpayers to fund this country. Free grants, free education, free healthcare, free land. You are stealing from the few people keeping you alive.

Pure stupidity and political grandstanding. Just to get the EFF on board to undermine the DA.Enough Govt land and Ngonyama Trust land (60% of KZN)for all.

People live under the illusion that you or they own or will own land.

You might have paid a huge price or got it for free for the exclusive use of the piece of land from the surface upwards, nothing underneath, it all belongs to Government.

Great! so you hold a piece of paper in your hand called ownership, but it’s only borrowed to you anyway at the Government/Council’s benefit by way of charging you more and more levy, rates and taxes as the time goes by….

Nobody will ever effectively own land. Even if you take it now and divide the land now and give each and every living South African an equal share of the land now.

What will happen when the population grows in future, how will the land be divided then? Or will this problem of land ownership perpetuate itself and someone new or new president in future will put his hand up and say they have the new answer. Those with money and those without money will deal with the land differently depending their talent…..even if each owner started with the same amount of money.

One day Government will arrive at your patch of land and say, I am very sorry but your land is not being utilised properly and they will be allowed by the constitutionally take it away from you if you don’t pay their new levy,rates,taxes and give it to someone else who may generate more money for the Government than you can.

Its a long storey, but I am sure many will come to the same conclusion as time goes by….

like the saying goes: what does the dog, chasing the car, do when he gets hold of the tyre ? problem is these people will turn to violence if they don’t get the ” tyre ” and forcibly take the car. Who wants to make a living in a country where this type of tensions/ hatred will always be around us?

Seems like people who were dispossessed during apartheid has already been compensated: “When the land restitution process began in 1994, some 79 700 valid land claims were submitted by December 1998. By 2013, as the then minister of rural development and land reform, Gugile Nkwinti, pointed out, roughly 76 000 successful claims had been disposed of. However, only about 5 800 of these successful claimants (roughly 8%) chose to have their land restored to them. The remaining 92% preferred to receive cash compensation instead.”

CR trying to blackmail the SA private sector, particularly the financial institutions, into providing a R180 Billion fund to pay off the farmers who will have to bit by bit give up their land. If you want support for this read Peter Bruce today in the so-called “Business” Day.

Then CR will say well it was all willingly, through negotiation, agreed to. (Just like the BBB-EE lie that was sprouted by cancer.) You all agreed to scorecards etc so that it was really amicable with no coercion.

This time CR and cancer have gone too far. The numbers are too big, the debt to large and growing with Fee-free & free National Health and the glaring incompetence of those with their cupped hands forever out, in plain sight for all to see.

Cancer and the forever disadvantaged had their chance on 3rd February 2000 and blew it spectacularly. No one will trust them ever again unless they scrap all race based legislation within the year.

After that too late for our people.

Let me get this straight.. We ( white south africans ) should give up our property rights because we are not from SA and the land are ” stolen “. Well if that is the case.. why are the millions of african immigrants in Europe not forced to give up their property rights, as they are also not originally from Europe.. same goes for a large portion of Australians? In fact, the immigrants to Europe are GIVEN money, houses and food for free despite having little to no education. What i am witnessing is a double standard of racism, a growing anti white sentiment worldwide. Google ” the kalgeri plan ” and be surprised.

Don’t come here with your logic and principals :). That is the nastiest part of this – as pacaratac effectively notes it is a pretend “principal” which will be used to enforce theft and blackmail; really just another step along the AA and BEE route. Remember these have plenty of support, from the “constitution” pieces of paper, through the press, corporates, political parties and individuals. But selection by race anyway is unprincipaled; apartheid should have taught us that. But I reckon Cyril’s wealth is the product of this system so he’s not going to agree to be bound by non-racist principals anytime soon. It is all about power, greed and politics; finish and klaar.

So CR all these talks of economic growth were just smoke and mirrors. Please tell us which businessses will invest in SA now. How many businesses will withdraw and how many jobs will be lost. Please tell us from who will we borrow money to get your tax deficit sorted out? And please tell us and the International community what was the purpose is of the land claim process in our constitution?

SO tired of the malema racist