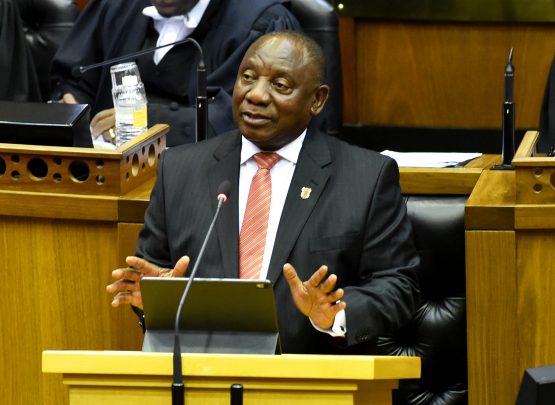 In response to the deepening youth unemployment crisis in the country, President Cyril Ramaphosa has announced a “two-pronged” intervention that is expected to reduce the shocking level of unemployment over the next five years.

Presenting the State of the Nation Address (Sona) on  Thursday, Ramaphosa announced what he called six priority actions which are expected to create job opportunities and self-employment opportunities under the Presidential Youth Employment Intervention programme.

The programme comes on the same week that Statistics South Africa announced that the country’s unemployment rate in the fourth quarter of 2019 had remained at an 11-year high of 29%.

The picture is bleaker when one whittles that figure down to people between the ages of 25 to 34 years, for whom the rate rises to 35.6%. Even more shocking is the 58% rate of unemployment among young people aged 15 to 24 years.

“This will be through top-slicing from the budget, which will require that we all tighten our belts and redirect resources to address the national crisis of youth unemployment,” said the president.

Finance Minister Tito Mboweni is expected to provide details on how this plan will be implemented when he delivers his mid-term budget policy statement in October.

Part of this grand plan includes a “youth employment initiative” that will be funded by setting aside 1% of the budget to deal with the high levels of youth unemployment.

“We need to make this country work for young people, so that they can work for our country,” said Ramaphosa.

The first initiative that will begin in February is a programme aimed at providing young people with work readiness training to increase their chances of finding work.

A pilot of five prototype centres aimed at imparting this knowledge and training either online, telephonically or in-person will be launched, with the ultimate goal of reaching three million young people.

Ramaphosa said the government is also working to “fundamentally change” how young people are prepared for the future of work, by providing “shorter, more flexible courses in specific skills that employers in fast-growing sectors need”.

“Third, we are developing new and innovative ways to support youth entrepreneurship and self-employment,” said the President.

“Fourth, we are scaling up the Youth Employment Service and working with TVET colleges and the private sector to ensure that more learners receive practical experience in the workplace to complete their training”.

Lastly, the Presidential Youth Service programme will be established to “unlock the agency of young people” by providing them with opportunities to earn a living while contributing to nation-building.

“These six actions will together ensure that every young person in this country has a place to go, that their energy and capabilities are harnessed, and that they can contribute to the growth of their communities and their country,” Ramaphosa said.

The intervention also brings in the National Youth Development Agency and the Department of Small Business Development, which will ensure that 1 000 young entrepreneurs receive a fighting chance through grant funding and business support “in the next 100 days – starting today”.

‘Shorter more flexible courses’? Is that not our problem? Watered down courses that result in half trained people. Trained for one specific little job and nothing else? Like a lawnmower operator perhaps?
This plan does not excite me very much…….

The fat blowhard should start at a more basic level. Tell the youth (anyone actually employed really) they need to buckle down and do any job they are offered honestly, diligently and to the best of their ability. Don’t demand extra’s and strike for 50c more.

Oops I forgot, he can’t even lead by example.

Tell them too not to be always late and always early to knock off. Come to work sober without a hangover and don’t use the age old excuses, “Dont know” and “Forgot” when all you need to say is yes it was me that broke it.

Stop spending taxpayer cash on things that don’t help. Scrap all government departments set up to help SMEs and do just one thing. MAKE DATA AND INTERNET AS CLOSE TO FREE AS POSSIBLE AND COVERING EVERY PART OF SA. South Africans will work out what to do.

It seems there are some values missing among a large part of the youth in SA; What springs to mind is accountability and integrity.

Really intrigued at the increasing degree of censorship being applied at Moneyweb.

Expressing an innocuous opinion that the DA are as much do-little imposters as the ANC (albeit with a different style).

Parliament has long since become an expensive talk-shop, whose direct relevance to the ordinary embattled citizen, is VISIBLY waning by the DAY!

The youth unemployment problem started long before your ruling party lowered the matric pass rate to, what? 30% ?

You’ve bred a generation of morons, now you’re the saviour with the solutions.

Like the Rupert empire was built on cigarettes, and went on to buy Medi-Clinic. Except in government terms.

There is already a work readiness programme. It is called MATRIC. Takes 12 years to get.
Reaching 3 million people by telephone is not going to make them “ready for work”.
Rather focus on being ABLE to do the job.

This from a guy that fired employees on his OWN FARM, just before Christmas 2019, due to THE ECONOMY.

The root of the problem are the child grants. For as long as child grants are paid out willy nilly, this problem will only be exarcebated.

Child grants are the next explosive item on the agenda. Soon they will hijack the entire budget.

Exactly right, stop the bloody breeding, as it is, SA needs in excess of 20 million people to just “disappear” to just get out of the starting blocks with the finances in the state they are in! As inhumane as it sounds, it’s real, this country and most of Africa is unable to support it’s population’s given how uncompetitive we are!

The supply and demand concept is not part of the general culture and desperately needs to be!

But without major famine, drought , war, disease, etc, the problem will persist, standards will drop, as the balance is too far out of kilter to self rectify!

First we need economic growth. There are no jobs for youth because everyone sits in the same job waiting for the person above them to die, and then everyone moves up one position and once entry level job opens up.

The question that our leaders, politicians and business alike should answer is …”in whose interest is it that a country should have employment opportunities for its peoples”?… Before they can genuinely answer the question no solution for this unemployment will be sought.

Why don’t we reduce the social grant age limit from 18 years to 15 years in order to help fund youth employment instead?
Legally you may not employ children under 15 years, but from 15-18 years children may do age-appropriate work that does not place them at risk or interfere with their schooling.
So let them earn their keep with 1-2hrs of work after school every day, cleaning the streets, basic admin, caring for the elderly, whatever, just anything useful to earn their keep or that can go onto a CV.

Whahhahaaaaaaaa. More like he talks a whole lot of something else.

This is Generation Entitlement.

The unemployment will always be high (even should growth and economic conditions improve) because they have been taught to demand, yell, throw tantrums and everything will be given for free.
Nothing needs to be earned and there is no incremental hard slog to success and prosperity.

This pilot of 5 centres aimed at “providing young people with work readiness training to increase their chances of finding work” – WTF. How can you be ready to work unless you have some sort of skill/training/ education – which the ANC has failed to provide to millions of scholars?
Remember it was the ANC that effectively shut down the trade schools where hundreds of Appi’s were trained in fully fledged technical skills as plumbers, electricians, motor-mechanics, builders, boiler-makers, welders etc. But these artisan skills were seen as demeaning by the ANC – second rate, not academic enough and only fit for less intelligent people – the oukies who couldn’t make it to matric. Lots of them are running their own businesses today employing people. Unlike the pricks sitting in parliament today and who are too dumb to be able to breath unless it was a natural activity.