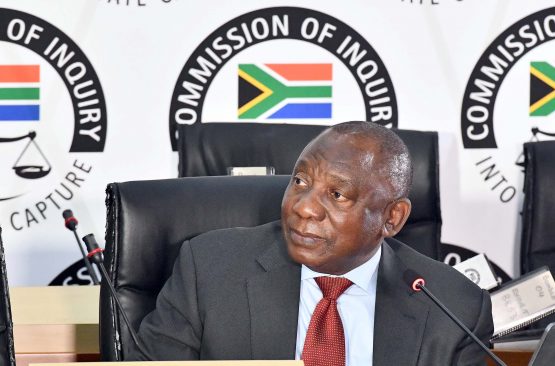 South African President Cyril Ramaphosa warned efforts to tackle corruption that became endemic during his predecessor Jacob Zuma’s rule will be a protracted process because of fierce opposition.

Those who sought to loot state coffers “populated the structures in government with their acolytes, their own people, who in some instances continue in doing their bidding,” Ramaphosa told a judicial panel in Johannesburg that’s probing the graft. There “is resistance against things being done correctly,” he said on Thursday.

Zuma led South Africa for almost nine scandal-marred years before the ruling party forced him to step down to counter a loss of electoral support and appointed his then-deputy, Ramaphosa, to replace him. The government estimates more than R500 billion ($34 billion) was stolen from state departments and companies, but no-one has been sanctioned so far — a situation the president said has to change.

“Those who are against the national contract we have should be dealt with,” he told the panel, which is headed by acting Chief Justice Raymond Zondo. “There should be accountability.”

Zondo’s panel began sitting in 2018, and numerous witnesses have testified that Zuma played a central role in enabling his allies to infiltrate and plunder state institutions. The former president, who is serving a 15-month jail sentence for defying a court order to testify before the panel and is facing trial on separate charges that he took bribes from arms dealers in the 1990s, has denied wrongdoing.

On Wednesday, Ramaphosa told Zondo that he’d considered resigning as Zuma’s deputy, but decided to stay on to fight the graft scourge from within the government.

When asked on Thursday why he’s retained individuals in his executive and government who’ve been implicated in wrongdoing, Ramaphosa said he was awaiting Zondo’s final report before deciding whether to act against them.

The judge warned that some of his findings are likely to be challenged in court, and said the lawsuits shouldn’t deter the president from taking action.

“I think some of the challenges we have had in our country are challenges where people who are supposed to make decisions have unnecessarily waited for court processes,” Zondo said. “Court processes can take six years, ten years, and in the meantime nothing is done, when something should be done.”

‘There should be accountability.’

Forget man!! Nothing will change. They are all thieves.

SA will slowly but surely go back to the way they like it. Bush, war, famine. pestilence.

There is no hope. The very people that must fix this place are damaged.

Rammy my man — with okes like you in charge corruption will NEVER be tackled !!!

Fierce opposition, to what, the law?

A few choice examples should do much to dampen the impulse.

It is because graft has become the norm that there is opposition.