The investigation may involve more banks than the 11 organisations currently named.
By Franz Wild and Chris Spillane, Bloomberg 2 Jun 2015  00:12 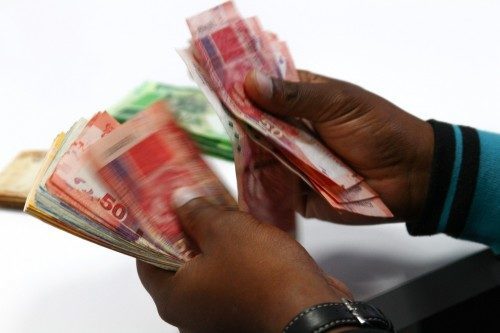 The head of the South African authority investigating banks for allegedly fixing the price of the rand said it will seek to prove “widespread” collusion and may probe more financial services companies with “stiff” fines expected.

Competition Commissioner Tembinkosi Bonakele, 39, said in a May 29 interview he was “fascinated” by the “very casual way” in which the alleged collusion between traders took place, mostly through electronic platforms. The investigation may involve more banks than the 11 organisations currently named, he said.

South Africa’s antitrust regulator on May 19 announced the probe into some of the world’s biggest banks including Citigroup and JP Morgan Chase. It was in part triggered by similar currency rigging probes in the UK and US which led to fines worth billions of dollars, Bonakele said.

“It’s very clearly widespread, not an isolated type of incident,” Bonakele said in his office in the capital Pretoria. “The individual firms should expect that the fines will be fairly stiff compared with the past.”

The law allows the Competition Tribunal, which rules on the findings of the investigation by the commission, to impose a penalty of as much as 10% of a company’s turnover. The size of the fine is calculated taking into account the revenue generated by the division in which the alleged collusion was taking place and the duration of the behaviour.

Construction companies were collectively fined R1.5bn ($122 million) by South African Competition Tribunal for colluding on stadium construction projects ahead of the country’s hosting of the 2010 soccer World cup as well as other projects. Pioneer Foods agreed to pay a R500m fine to end a probe into price-fixing in flour and corn processing. Both cases were based on recommendations from the commission.

Traders at different banks allegedly used a chatroom called “ZAR Domination” on a financial services platform to share information about incoming quotes from clients wanting to buy or sell rand in bulk, he said. ZAR is the rand’s currency code. The alleged collusion was widely practiced and not the work of a few individuals, Bonakele said.

“Rogue elements in 11 respondents and involving a multiplicity of countries would be a bit of a stretch,” Bonakele said. “The banks have to accept that there’s a big problem of culture here which needs to be stamped out.”

BNP Paribas SA, Standard Bank Group, Barclays Africa Group Barclays Plc, Investec, Standard Chartered and some of their units were also named in the probe. The regulator is only obliged to approach the banks once it submits its findings to the Competition Tribunal for adjudication.

Standard Bank, Standard Chartered, Barclays Africa and Investec spokesmen and women said their banks will co-operate with the relevant authorities. Barclays and Citigroup didn’t immediately respond to calls and e-mails seeking comment. BNP Paribas and JPMorgan declined to comment. Citigroup has previously said it will cooperate.

“I am surprised that we’re still uncovering things like this,” Bonakele said. “And it’s a bigger question than just us. It requires regulators and policy makers around the world to solve it.”

“We are in the middle of an investigation, there could be things happening as we speak,” Bonakele said.

The commission has jurisdiction over any rand transactions, even if they happened abroad, as is the case with the ones being looked at by the regulator, Bonakele said. Given the banks are represented in South Africa, they will be obliged to pay any penalties levied, he said.

“The reality is that the bulk of trading in the rand happens offshore,” Bonakele said. “We are looking at trading off-shore in a big way.”

The regulator looked into the allegations for about a year before officially launching the probe about six weeks ago, Bonakele said. Who or what prompted the probe was “sensitive,” he said. He declined to say how long the practice may have been taking place.

Deputy South African Reserve Bank Governor Kuben Naidoo last week said it may have been a whistle-blower or “a confession” that sparked the probe. Companies being investigated by the Competition Commission can have their fines reduced by coming forward with information.

“I’m quite confident that at least some banks will settle,” Bonakele said. “They have settled elsewhere in the world, I’d be surprised if they don’t do so here. You’re likely to have some outcomes fairly quickly.”

One factor affecting the size of the fine is whether the banks take steps to end the alleged conduct, Bonakele said.

Of penalties will be big. …………………. that is the mindset to collect taxes and pay for the salaries of useless civil “servants”.

Legalised Crooks – Déjà vu
My view on all of this is:
Only legalised crooks uses ‘’chatrooms’’ called ‘’ZAR Domination’’ on a financial services platform to share information about incoming quotes from clients who wants to trade in big amounts.
I was also ‘’fascinated’’ by the 2002 Rand Commissions findings as it was my view that ‘’rules and regulations’’ and ‘’ethical codes’’ were blatantly ignored, as currency manipulation, collusion and front running by certain banks were overlooked.

All Front End Foreign Exchange Operations (FX dealing rooms) in South Africa monitor all dealing transactions and electronic platforms in line with compliance, internal and external audit purposes. They all have dedicated departments (i.e. middle-and back offices) that ‘’scrutinize’’ all these transactions and platforms on a daily basis.

‘’As Nick Gleeson, the Rogue Trader said in his autobiography, the focus of the internal and external auditors was to:

…and they predictable investigated and criticized his position’’…..

I refuse to accept that senior management wasn’t aware that these ‘’price fixings and rate manipulations’’ were going on in their Treasury due to daily management reports that picked this up, hence the ‘’very casual way’’ that it was done.

If found guilty, heavy fines should be imposed on these ‘’Rough Banks with their Rough Traders’’, as the commission has jurisdiction over any ZAR transactions.

Investec seems to be the only ‘’local bank’’ on the list of ‘’rand manipulation’’ at this stage.

The penalties will be minute relative to the illegal profits made by the banks. Who buys the majority of government bonds? In order to keep up appearances, governments can bark at the hand that feeds them but they won’t bite it!

Investec’s eternal CEO Stephen Koseff is well-known for the refrain: “South Africa has a reputation as a top regulatory destination”. If only he knew.

All thius talk of fines etc is all very well, but remember this; banks have no money of their own. They are supposed to be custodians of ours, depositors and inbestors.
So if one (or more) of them has to pay hefty fines, then expect hefty increases in already exorbitant transaction fees and lower deposit interest rates.
Do the math. It is the citizen who is screwed not the bank’s criminal staff members.
Will they be prosecuted to the full extent of the law, or will their emplyers simply ‘transfer’ them somewhere else like the ANC allegedly does with its criminals?
Read a good book “Zuma Exposed” by Adriaan Basson.Then curse the ANC Voter for keeping these neanderthal kleptomaniacs in power.

Methinks Adriaan Basson should rather write a book called “Banks Exposed” as there might be much more criminals in banks than in the Government. Certain Banks in this country think they are ”’free to profit from fraud”!

My views are as follows:
Banks might not have ‘’money of their own’’, but with these types of fraud they ‘’milk all local corporates’’ dry. Lots of companies went bankrupt during the last decade due to exchange rate volatility losses, orchestrated by bank’s criminal acts, with our ‘’deposits’’.
BARCLAYS Africa listed on the JSE, following Absa Group’s R18.3bn acquisition of Barclays’ African business.
Barclays PLC has therefore increased its 55.5% stake in Absa to 62.3% through the issue of 129.5-million ordinary shares by Absa to create the new entity, named Barclays Africa. Barclays CEO Antony Jenkins recently said Africa was the group’s largest region after the UK and US. It contributed more than 10% of Barclays’ first-half profit before tax.
Barclays Africa Group therefore pays 62,3 cents profit in every Rand over as dividends to Barclays Plc, hence my view that they are a ‘’net foreign currency exporter’’, in the name of ‘’globalisation’’. They are also listed as one of the banks that colluded to fix the exchange rates, at the expense of our importers and exporters, locally and offshore.
I am a retired Forex dealer (spot, forward, derivative and corporate), and over a period of 45 years worked in five countries all over the world. It is ‘’absolutely impossible’’ to fix any forex rate on a ‘’platform’’ over time without the ‘’internal and external auditors’ ‘picking it up immediately. I am therefore not surprised that these ‘’legalised crooks’’ all over the world immediately inter into ‘’plea bargains’’ as they cannot defend these charges due to the fact that top management were obviously aware of this and condoned it.
My view is that banks should ‘’clean out’ their dealing rooms, together with every member of senior management that condoned this over time.

Great expansion of the debate. Very focussed on the issue. Let Adriaan loose on the banks and we’ll really see sparks fly; he does not mince his words.

Your point about the corporates who suffer is like a domino effect. Corporates suffer losses and that must also affect their pricing. Vicious circle.

And your insight is useful to an outsider like me.
Thanks