The rand plumbed a record low after the country lost its last investment-grade credit rating, and investors anticipated it may slide deeper into junk as the spread of the coronavirus decimates the economy.

The currency dropped as much as 2.5% to R18.08 per dollar, breaching 18 versus the greenback for the first time. It traded 1.8% down at R17.93 by 6:58 a.m. in Johannesburg, still the worst performance among emerging-market currencies tracked by Bloomberg. Yields on 10-year government bonds climbed three basis points to 11.73%. 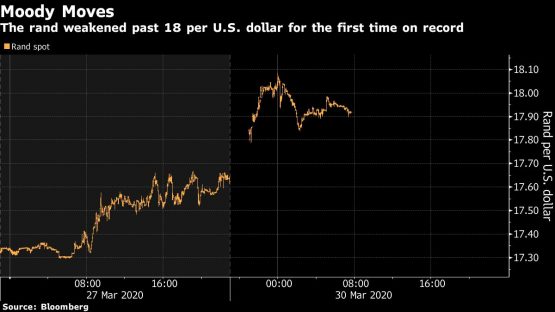 While cutting South Africa’s rating to Ba1, one level below investment grade, Moody’s kept its outlook on the debt at negative, which it said “reflects downside risks to economic growth and fiscal metrics.”

That could lead to a rise in the debt burden, increasing borrowing costs and weakening South Africa’s access to funding, it said.

The downgrade will cause Africa’s most industrialised economy to fall out of the FTSE World Government Bond Index, which could prompt outflows of as much as $4 billion, according to Morgan Stanley. Foreign investors have already sold a net R46.8 billion ($2.7 billion) of government securities this year.

The rating agencies will do anything to prop up the dollar in my opinion.
I’m not saying we aren’t complicit in our own economic demise but…this is a rigged wheel of fortune, they timed it perfectly.
South Africa has been here before – we can survive this but it will take enormous effort by business SA and a concerted effort by the ANC to rid itself of BEE policies, red tape and municiple corruption just for starters….

“Record low”…no, South Africa has not been here before. Hope is not a process.

They didn’t time it perfectly. The announcement was always going to be on 27 March.

What’s so sinister about that date?

The reality is that the government is hopeless. They don’t have a health system that is able to cope, the government departments are inept and the ministers are aloof.

That is really why corona is going to really whack us.

The current state of South Africa’s finances is nothing new. It has ben decline since the ANC took over, and has been flat out looted since then. The fact that we have insufficient cash reserves to prop up our economy is nobody’s fault other than the ANC’s.

No an anc lead government has never been here before..

we should have a pool where people can predict closing runt rate for say Friday 29 May. My bet would be much stronger – 16.25 or so.

just buy forex, it’s the largest pool of them all. If you want a particular price just buy some options, if you say it isn’t going to move sell some options of some volatility derivatives.

Majority of SA voted for this.

and will continue to vote for this …

Not this year EVER!!

@Johan_Buys – your grapevine is well informed. Shanghai Co-operation Council announced today they will start bypassing USD in trade. Max Keiser (Google him) might also be on the money, so to speak – he foresees the end of the PetroDollar. Interesting times ahead…..

I see many complaints in the media, government and on forums. The truth is, Moody’s simply had no choice. When a reserve bank enters the market as a buyer of last resort for bonds that no-one wants to own, then a firm such as Moody’s has two choices:

1. Downgrade, as they should, in fact should have done at least a year ago
2. Risk their reputation with a relatively insignificant country defaulting on their debt.

South Africa …could have been an “Apex” economy

I suppose we’ll get a plethora of statements from government and politicians about “structural reforms” and the need for rapid implementation, accompanied by more “war room ” plans and strategies, etc.
But then NOTHING WILL HAPPEN.
Standby for ceaseless talk about the problems …… standby for more discussions, summits, conferences, etc.

Let the whining begin! (SA brought this on itself)

They will harp back to pre 1995, never their fault, never take responsibility, always the collective.

Friends, Romans, countrymen, lend me your ears;
I come to bury Caesar, not to praise him.
The evil that men do lives after them;
The good is oft interred with their bones;
So let it be with Caesar.

I must admit that I am relieved now that we are downgraded to Junk by Moody’s as well. I just got to a point that I couldn’t stomach what was coming out of the Zondo and other Commissions daily. The ANC led government failed us and took us to the financial cliff in record time. There were no accountability, no controls, and no moral compass and ultimately – these rating agencies finally took all South Africa’s economic indicators into account and determined our economic prospects and with that context determined a very accurate picture of our fiscal future, and the serious consequences thereof.
It became sickening to watch what was going on in Parliament, with the EFF allowed to dictate most sittings with their ‘’populist’’ behaviour and mayhem. All these ratings agencies and compliant governments all over the world watched these ‘’Laurel and Hardy’’ type shows – which spiralled out of control with the threats, assaults and demands flying around.
SA has now lost our ‘’martyr status’’ that we had for many years after Mandela came to power and investment- and pension funds all over the world started investing in SA. These very same funds are now compelled by their laws to withdraw these funds immediately from SA. The Rand will tank (supply and demand) and the cost of borrowing to replenish the ‘’canyon’’ that will be left thereafter will be costly.
By now, the financial markets all over the world knows that we are downgraded to junk and potential investors will price in the risk of South Africa’s debt has increased exponentially as a result of this. They will also know that the SA government hasn’t got enough money to pay back what it borrows.
Any SA borrowing in the future (due to the increased risk that sunny SA will now be more likely to default on the repayment) – a much higher interest rate will be charged to compensate for the higher risk.
In South Africa’s case ( with the context that the government themselves ‘’provided’’) the reason for the downgrading was plain and simple – it was political turmoil, instability in the mining sector, slow economic growth, government corruption, collusion in parliament where the ANC and EFF was planning to pass legislation for ‘’the State Robbery of the Century’’ – Land expropriation without compensation. Moody’s with a very well calculated move, put paid to all your expropriation plans and schemes. The ANC will now have to do that at their peril as we are now already at the edge of the precipice.

Dear Mr Mboweni. PLEASE PLEASE peg the ZAR to the Gold price. It could be one of the most important tools you can use to get us out of this mess.

So vindictive was the ANC, that they ordered the people in the ratings divisions of both Fitch and S&P to leave within 24 hours after they downgraded SA’s bonds to Junk. Will that happen to Moodys?

Even the IMF may well no longer be able to support us , as they need the USA to support that. Donald Trumps views on Africa were quite well expressed and he was regrettably Correct !

So where’s all the “we will force an economic collapse” people? You got what you want.. I don’t see the ANC suddenly loosing power but I do see yourselves and everyone else suffering. Funny how that works hey,, you okes love pointing to Zim.. but I can tell you politically connected don’t suffer there either,, guess who the fool is..

Mike Schüssler / 4 Jun 2020
The coronavirus pandemic is about to give way to the biggest debt and unemployment crisis ever.
24