This is the decision facing many SA businesses. Their confidence must be rebuilt, now.
By Busi Mavuso 13 Sep 2021  13:00 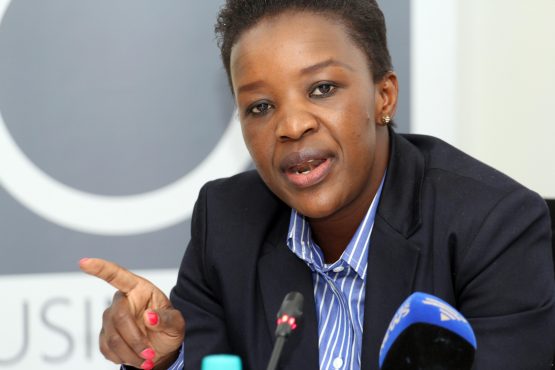 On Sunday night the president did well to make it abundantly clear that vaccination is very important. People who are vaccinated have a far lower probability of serious consequences from the disease. Ultimately this is the route back to a fully functioning economy and freedom for us to get back to normal life.

The progress so far has made it feasible to relax more lockdown conditions. It is important for us to get all parts of the economy back into gear. I was also pleased that the president announced the introduction of vaccine passports. Of course, we must still determine how and when these should be used but having a simple way of verifying you’ve been vaccinated is going to be important. He could have gone further in returning alcohol sales rules to normal and doing away with curfews altogether, but we are taking a step closer to normality.

Last week was a stark reminder of the work we need to do.

The first data showing what the violence of two months ago in KwaZulu Natal and Gauteng did to the economy [was released].

This reflects not just the factories that were directly affected by the violence and destruction, but also the ripple effects of supply chain disruptions, as those who were manufacturing couldn’t get goods to customers while ports and other key transport nodes were frozen.

Immediately after the violence there were positive messages from key voices in both government and business. Public Enterprises Minister Pravin Gordhan spoke alongside Trade and Industry Minister Ebrahim Patel and (now) Human Settlements Minister Mmamoloko Kubayi spoke from the side of the N3 when the road was reopened to encourage the recovery. That was the right kind of symbolism. Government has announced various measures to support those affected, including a R3.75 billion support package and rapid access to the Unemployment Insurance Fund for those who cannot work. There has also been good work done to ensure that businesses that were insured can submit claims efficiently to Sasria, the state-owned insurer that covers risks related to unrest, which in turn has promised quick payouts.

These will help those most affected, but the problem is that they won’t on their own change the prospects for businesses that are now having to decide whether to put their money at risk again and rebuild.

Businesses that receive a payout have to then decide whether they will use the proceeds to reconstruct and restart. To do that they need a high level of confidence about the future. Rebuilding is an investment decision – there needs to be high confidence that the returns will justify the risks. There is no longer a sunk cost and businesses can instead decide to use insurance proceeds for other purposes, including building elsewhere in the world, or giving the money to shareholders rather than putting it at risk.

There are businesses large and small, locally owned and foreign owned, that must make these decisions now. For all of us invested in the South African economy, we must all hope that they choose to reinvest. That is how jobs will be protected, tax revenue will be generated and the supply chains that the rest of the economy depend on will be maintained. This is something both business and politicians should be singularly focused on supporting.

We have a window of opportunity to rebuild that confidence.

Immediately after the unrest there were strong political statements. Organised business rallied to support the security services and then to assess what would be needed to drive the reconstruction and reinvestment process. We remain ready to assist government in many ways but the momentum has slackened.

There are many distractions – the pandemic, and now an election, among others. But the time is now – if we miss the opportunity to give companies that were affected a positive shot of sentiment, the destruction of July will be locked in and a component of our economy gone forever. We need to be directly supporting businesses, both to rebuild  by offering the right services, but also with a positive political message that demonstrates how the violence was a once off, and that government wants to see them rebuild and will do what it takes to create the right environment for businesses to thrive.

I am ready and able to work with government to support confidence. We know what it will take – engaging with business owners, hearing out their concerns about the future, demonstrating how the environment is going to be positive for them and their businesses.

Many business leaders want to rebuild – they are emotionally invested in their businesses and the people that they employ. But they cannot do it without a sense that government, and the rest of the country has their back.

That the unrest they faced was an aberration that all of us across the country are determined to put behind us and never see again. Let us focus on doing it – the time is now.

The harsh reality is that this government has shown its total incompetence by not being able to identify the plunder threats, deal decisively with them in a pro active manner, deal with the out of control looting over a 3 day period and take any action to prosecute those involved.

The harsh reality is that the population has seen the incompetence and immunity from prosecution first hand and it is therefore guaranteed to be repeated again in future.

The fact that those businesses that were affected by the looting still battle to get their payments from SASRIA and some doubt they ever will.

How can anyone in his right mind reinvest in this broken country is beyond me.

Well, the citizens showed their mettle…. And values.. If I could, I’d have emigrated long ago. I pity those poor businesses. I would not rebuild. I would relocate if possible. I do not invest any discretionary funds in SA Inc..except the Reg 28 stuff.. I only do Only foreign. I’m stuck here. Sorry for all the “I”….

The collective of “We” all start with a lot of I.

Why can’t you immigrate? It is most easy.

Comment replaced: “the only thing that will rebuild my confidence is a new truly democratic government”

It seems that my comment illuminated the inconvenient truth about property rights in South Africa. In fact, my comment has been expropriated without compensation.

Speaking truth to power is always unpopular. Never changes either truth nor consequences, though.

Sensei, your concerns with the erosion of property rights in SA are valid. However, these pale into insignificance if you consider what the future holds. According to Stanford Professor – Jeremy Weinstein – “The question we all need to face over the next decade is: How do we set up a government that can respond to the pace of technological change?” While this question is directed at the US – it applies equally to all countries. Recent events suggest that in the case of SA, no current political party / govt will be able to even comprehend, never mind actually manage the imminent social & economic fallout from the “Exponential Age”. SA’s who understand this need to plan accordingly, or they will be literally swept away.

Seito, thank you for a thought-provoking comment. The way I see it is that there is nothing new on earth. Technology changes, like it has been doing for the last 10 thousand years.

People stay the same though. Governments are institutions constructed by people and people adapt their voting habits according to economic circumstances. Economic growth, therefore, determines voting patterns. If technological advances can drive economic growth, then we will have political stability. If not, we will have riots in the streets, social unrest, and rising socialism.

I do fear that developments in monetary policy will create fertile grounds for a new wave of Nazi-style National Socialism as it did after the devaluation of the Papiermark by the Weimar Republic before the Second World War. The only technology that poses a threat to social stability is technological advances in the dollar printing press.

When rebuilding try to create a business that does not rely on electricity , water , does not need to employ anybody under the current labor and BEE laws , is 100 % loot proof , does not have to deal with any government department and has pricing power.
See : its that easy ….

My (future) side hustle I’m working on check all these except for electricity since it’s digital. For now it’s a work in progress, but should be up in about 6 months time.

This is the head of business leadership?? We’re in big trouble.

I dont know, who are all these people??.
I have a generational business which has employed people, paid taxes, supported the local community for over 50 years, yet I have never heard of them, they have never consulted with me, they have done nothing for me or my business, now we hear all these inspirational quotes and we must just fall in line,…sorry, I must have missed the welcome party invitation,…!!

Sensei, Your reference to the Weimar Rep is illustrative. History suggests that after every significant tech advance (Ind.Rev etc)- the soc & eco disruption disruption caused is such that it fuels the the appeal of Nat.Soc and /or its close cousin – Communism. While I agree that this is oft fuelled by loose monetary policy / devaluation – what I fear more is that the advance of 21st C tech is such – that we may be entering into a continuum of “Arab Springs”. Of specific concern, is the fact that the universality of cell phones & social media has not been matched by the ability of most to be able to differentiate between what’s real or not. This allows for the tech. platforms to be ruthlessly exploited – thereby providing a propellant to the tinder. If you add endemic corruption & tribalism to this toxic mix – you arrive at what is happening in the Levant. SA will not escape the same fate…