Rosebank rising... the burgeoning office node in Johannesburg is the priciest in the country, according to the latest Rode Report on the South African Property Market. Picture: Moneyweb

Trendy Rosebank may not have the tallest building in Africa, like sister Johannesburg hood Sandton, but according to the latest Rode Report, it is the most expensive office property node in the country.

The report, published by property economists Rode & Associates, shows that in the first half of 2019 Rosebank’s average grade A+ (or premium grade) office market rental stood at around R245/m².

The smaller Johannesburg node of Melrose Arch followed with an average of R230/m² while Sandton and the V&A Waterfront in Cape Town came in with rentals of close to R220/m².

Rosebank has an office vacancy rate of 7%, which is significantly lower than the over 18% seen in Sandton’s CBD.

Gauteng’s burgeoning new node around Waterfall City, developed by JSE-listed real estate investment trust (Reit) Attacq, is not far behind with the report showing its grade A+ office market rental averaging at just over R200/m². 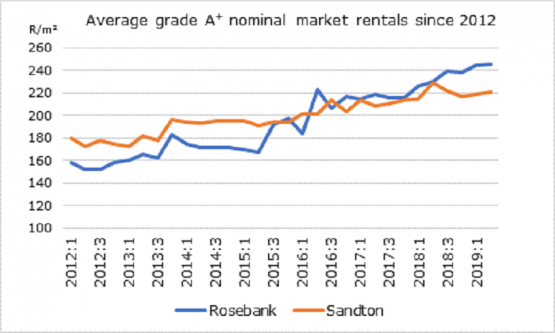 He adds: “The rental gap between the two nodes has especially widened during the last few years. A vacancy rate analysis shows the same trends, with Sandton’s vacancy rate increasing sharply from the third quarter of 2017 and Rosebank showing improvement.”

He believes the outperformance of Rosebank is not necessarily due to it becoming more sought-after than Sandton. “Rather, it is Sandton’s super popularity with developers that has led to a temporary oversupply that is worse than Rosebank.”

Lamprecht attributes the high vacancies in Johannesburg’s two top office nodes (Sandton and Rosebank) to overzealous new developments. “These nodes have temporarily become the victim of their own success.” SA’s second-largest Reit, Redefine Properties, has a strong presence in Rosebank and is behind several major developments in the area. Redefine says it has pumped around R1.64 billion into new developments over the last few years, including Rosebank Link and Rosebank Towers – home to its own headquarters.

Pieter Strydom, commercial asset manager at Redefine Properties, comments: “Redefine is not surprised by the fact that Rosebank is home to SA’s most expensive office node. This is attested by the investments we made over time in anticipation of the growth of the node. Rosebank, like Sandton, has benefitted from the Gautrain station based in the node. However, it also boasts better access as a more integrated node that is easily accessible by foot and is smaller than Sandton.” While Redefine has completed several developments in the node, Strydom says it also holds two strategic land holdings at 15 Baker Street and “The Galleria site”, which it plans to develop once suitable tenants are sourced. He notes that while Redefine’s office vacancy rate in Rosebank is currently less than 5%, it did have “some larger vacancies in Sandton”.

He notes that letting generally remains under pressure in Sandton. He says, however, that the Rivonia Road precinct (from the Discovery building through to the Gautrain station) remains in high demand, “attracting higher office rental rates than the Sandton average and part of Rosebank”.

Fellow Reit Growthpoint Properties is also investing in Rosebank, with its R600 million 144 Oxford building set to be complete in October, while private group Intaprop has already invested more than R500 million into its Oxford Parks development. Oxford Parks is part of the first phase of a much larger 350 000m² project that will be rolled out over several years.

If the waterfront office rentals are below the indicated numbers, they should convert them to residential apartments. Bachelor apartments of 34 sqm rent for double the office rate per square